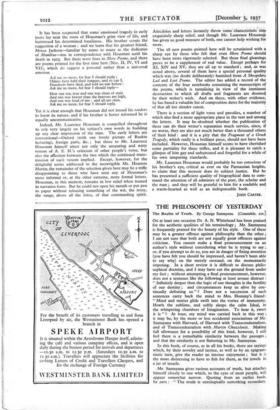 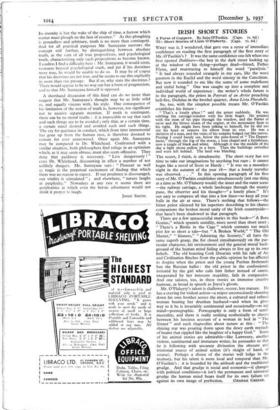 THE PHILOSOPHY OF YESTERDAY

The Realm of Truth. By George Santayana. (Constable. los.)

ON at least one occasion Dr. A. N. Whitehead has been praised for the aesthetic qualities of his terminology ; Mr. Santayana is frequently praised for the beauty of his style. One of these may be a greater offence against philosophy than the other ; I am not sure that both are not equally great offences against criticism. You cannot make a final pronouncement on an author's style without considering what he is trying to say ; or, if you attempt to do so, you are in danger of fixing attention (you have felt you should be impressed, and haven't been able to say why) on the merely orotund, on the momentarily imposing. In a short review it is difficult to discuss philo- sophical doctrine, and I may have cut the ground from under my feet ; without attempting a final pronouncement, however, does not a sentence like the following at least arouse distrust : " Infinitely deeper than the logic of our thoughts is the fertility of our destiny ; and circumstances keep us alive by con- tinually defeating us " ? Does not a succession of such sentences carry back the mind to Mrs. Hominy's friend : " Mind and matter glide swift into the vortex of immensity. Howls the sublime, and softly sleeps the calm Ideal, in the whispering chambers of Imagination. To hear it, sweet it is " ? At least, my mind was carried back in this way ; it may be, by the more or less accidental associations of Mr. Santayana with Harvard, of Harvard with Transcendentalism, and of Transcendentalism with Martin Chuzzlewit. Making full allowance for a possibility of this kind, however, I still feel there is a remarkable similarity between the passages ; and that the similarity is not flattering to Mr. Santayana.

In this book, of course, as in all his books, there are sayings which, by their novelty and justice, as well as by an epigram- matic turn, give the reader an intense enjoyment ; but it is the more distressing to have to fish for them, as for jewels in a jar of treacle.

. Mr. Santayana gives various accounts of truth, but attaches himself closely to one which, to the eyes of most people, will appear somewhat narrow. Quoting from an earlier book, he says : ." The truth is ontologically something secondary.

Its eternity is but the wake of the ship of time, a furrow which matter must plough on the face of essence." As this ploughing is groundless and arbitrary, truth is no more than contingent. And for all practical purposes Mr. Santayana narrows , the concept still further, by distinguishing between absolute truth, as the sum of all true propositions, and psychological truth, characterising only such propositions as become known. I confess I find a difficulty here : Mr. Santayana, it would seem, ventures beyond psychological truth, and yet if his doctrines were true, he would be unable to do so. It may be of course that his doctrines are not true, and he seems to say this explicitly in more than one passage. But if so, why state the doctriries ? There would appear to be no way out but a form of pragmatism, and to that Mr. Santayana himself is opposed.

A shorthand discussion of this kind can do no more than suggest that Mr. Santayana's thought may be as little solid as, and equally viscous with, his style. One consequence of his limitation of the notion of truth is, however, too significant not to receive separate mention. If truth is contingent, there can be no moral truths : it is impossible to say that such and such things are to be avoided ; only that, at a certain time, a certain mind desired and avoided such and such things. The cry for guidance in conduct, which from time immemorial has gone up from the human race, is therefore doomed to remain for ever unanswered. Once again Mr. Santayana may be compared to Dr. Whitehead. Confronted with a similar situation, both philosophers find refuge in an optimism which, as it may seem obtuse, must also seem offensive. They deny that guidance is necessary. " Live dangerously ! " cries Dr. Whitehead, discounting in effect a number of not unlikely dangers. Mr. Santayana says : " Pleasant as well as tragic is the perpetual excitement of finding that which there was no reason to expect. If our prudence is discouraged, our vitality is stimulated " ; and elsewhere, " nature laughs at perplexity." Nowadays at any rate it seems there are perplexities at which even the heroic adventurer would not think it proper to laugh.