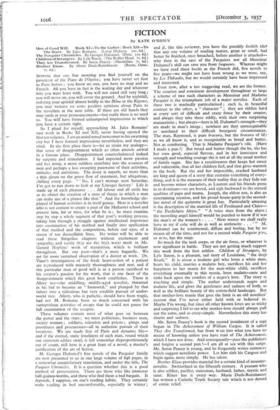 SUPPOSE that one fine morning you find yourself on the pavement of the Place de l'Opera ; you have never set foot in Paris before ; you know no one, you have no map and no French. All you have in fact is the waiting day and whatever wits you were born with. You will not stand still very long ; you will move on, you will cover the ground. And by nightfall, ordering your aperitif almost boldly in the Mime or the Regence, you may venture on some positive opinions about Paris to

the travellers at the next table. If these are old hands they may smile at your pronouncements—but really there is no need to. You will have formed unhampered impressions to which you have a certain right.

So I plead for myself, approaching M. Jules Romains' vast work in Books XI and XII, never having opened the first ten volumes. I am an uninformed newcomer to his swarming city but I have formed impressions nevertheless, and they are

vivid. In the first place there is—let us strain my analogy— that sense of disappointment which so often attends arrival in a famous place. Disappointment counterbalanced indeed by surprise and stimulation. I had expected more passion and less irony, a more ruthless searching into the essences of men and perhaps a less sweeping panorama of their activities, attitudes and ambitions. The irony is superb, no more than a thin gleam on the grave flow of statement, but ubiquitous, chilling every page. " No, I can't manage next Saturday, I've got to run down to look at my Limoges factory.' Life is made up of such pleasures . . . All labour and all strife has as its object the creation of a state of things in which a man can make use of a phrase like that." And the knowledge dis- played of human activities is in itself genius. Here is a novelist who is not content to create a poet of the Mallarme school and present him, hit or miss, for what he is ; he must examine step by step a whole segment of that poet's working process, taking him through a struggle against intellectual impotence into examination of his method and finally into application of that method and the composition, before our eyes, of a stanza of ten decasyllabiC lines. No writer will be able to read these Strigelius chapters without excitement and sympathy, and surely they are the high water mark in Mr. Gerard Hopkins' work of translation, which is brilliant throughout. But one poet—that's a mere bagatelle. We get far more sustained observation of a doctor at work. Dr.

Viaur's investigations of the freak heart-action of a patient are reproduced with masterly thoroughness and zest, and if this particular man of good will is as a person sacrificed to his creator's passion for his work, that is one facet of the disappointment which this great book establishes. There is

Allory too—the middling, middle-aged novelist, thwarted in his bid to become an " Immortal," and plunged by that failure into a ridiculous but very credible pursuit of under- world vice. Allory, who is pathetic, should have been tragic, had not M. Romains been so much concerned with his

surreptitious activities of escape that he could not pause for full examination of the escapist.

These volumes contain most of what goes' on between the gutter and the stars ; we meet politicians, business men, society women ; soldiers, scientists and priests ; pimps and prostitutes and procuresses—all in authentic pursuit of their vocations. We are made free of Paris and dynamic life—

and if the eternal, static loneliness of each man, round which our extrovert eddies swirl, is left somewhat disproportionately out of count, still here is a great feast of a novel, a master's justification of the art of fiction.

are now presented to us in one large volume of 848 pages, in a somewhat unsatisfactory translation, and under the title, The Pasquier Chronicles. It is a question whether this is a good

method of presentation. There are those who like immense half-guinea-worths, and those who find them a bad bargain. It depends, I suppose, on one's reading habits. They certainly make reading in bed uncomfortable, especially in winter ; and if, like this reviewer, you have the possibly foolish idea that any one volume of reading matter, great or small, had

better be finished, once broached, before another is attacked— why then in the case of the Pasquiers not all Monsieur Duhamel's skill can save you from longueurs. Whereas might we have read these books as the French did, five novels to five years—we might not have been wrung as we were, say, by Les Thibaults, but we would certainly have been impressed and interested.

Even now, after a too staggering read, we are the former. The creation and consistent development throughout so large

a scheme of two such characters as- Monsieur and Madame Pasquier is the triumphant job of a major novelist. Each of these two is markedly particularised ; each is, in beautiful contrast to the other, a " character " ; they are ridden hard at every sort of difficult and crazy fence by their creator, and always they take these oddly, with their own surprising mannerisms ; but always—here is M. Duhamel's strength—they are made in man's image ; . nowhere are they unrecognisable or unrelated to their difficult bourgeois circumstances.

The man, Raymond, is pure bravura, but the bravura of life as we all know it, and as recognisable as bread and butter. Not as comforting. That is Madame Pasquier's role. (Have

I made a pun ?) But bread and butter though she be, she has her own good, especial flavour, and in her innocence and strength and touching courage she is not at all the usual mother

of family sagas. She has a sensitiveness that keeps- her sweet and vulnerable, that all her children feel, and that gives warmth to the book. But she and her impossible, cracked husband are king and queen of a story that contains something of every- thing, and it is the measure of their reality that as they fade out and become minor characters, as Laurent and his friends press in to dominate—we are bored, and sigh backward to the eternal qualities of papa and mama. Joseph, the eldest son, is also an entertaining creation, and his proud house-party in the second- last novel of the quintette is great fun. Particularly amusing is the description of the married life of Ferdinand and Claire- " the Ferdiclaire Abyss." " A voice rises from the abyss ; the recording angel himself would be puzzled to know if it was the man's or the woman's : . . . ' Next winter we shall really have to try if coke will do as well as anthracite . . . ' " M. Duhamel can be sentimental, diffuse and boring, but by no means all of the time, and not for a second while Pasquier p are, or mare, has the stage.

So much for the tank corps, or the air force, or whatever is now significant in battle. They are not getting much support this week from the foot soldier. Children of Strangers, by Lyle Saxon, is a pleasant, sad story of Louisiana, " the deep South." It is about a mulatto girl who loves a white man, bears his child, marries a mulatto boy, sacrifices his and her happiness to her mania for the near-white child, sacrifices everything eventually to this mania, loses mulatto-caste and sinks back upon the comfort of a negro's love. The story is touching and simple. The author understands negro and mulatto life, and gives the gentleness and sadness of both, as well as the brilliant beauty of the cotton-field landscape. But that mother-love mania that goes the limit is an old novelists' custom that I've never either held with or believed in. Maybe I'm wrong, but since all other known loves are so tricky and surprising I fail to see why mother-love should always pull out the same, and so crazy-simple. Nevertheless this story has Charm and sadness.

Mr. Seton Peacey's book is the second instalment of a saga begun in The Achievement of William Cargoe. It is called They Are Transformed, but from wliat into what you have no means of knowing unless you have read of The Achievement, which I have not done. And- consequently—pace the publishers

and forgive a second pun am all at sea with this cargo. Mr. Seton Peacey is young, and he frequently writes sentences which suggest novelistic power. Let him sink his Cargoes and begin again, more simply. He has talent.

Brother Klaus provides material for a certain kind of monster- novelist. Switzerland in the fifteenth century. A peasant who is also soldier, pacifist, statesman, husband, father, mystic and saint. Klaus has it every- way.- Maria - Dutli-Rutishauser has written a Catholic Truth Society tale which is not devoid of comic relief. -