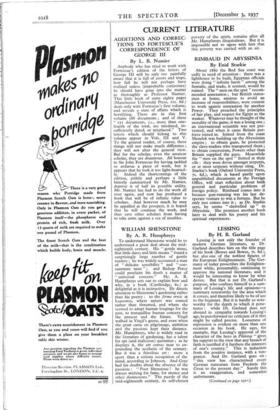 LESSING By H. B. Garland

Lensing is not only the founder of modern German literature, as Dr. Garland describes him on the title page of his book (Bowes and Bowes, 7s. 6d.), but also one of the noblest figures of the European- Enlightenment. The Ger- many of today proscribes the Enlighten- ment while, presumably, continuing to approve the national literature, and it would be interesting to know by what device. But that is not Dr. Garland's purpose, who confines himself to a sum- mary of Lessing's life and opinions—a summary noteworthy for the area which it covers, and therefore likely to be of use to the beginner. But it is hardly so note- worthy for the depth to which it pene- trates : while Dr. Garland does not abound in- sympathy towards-Lessing's age, he puts forward no criticism of it that might be called precise. Looseness of expression is evident on more than one occasion in his book. He says, for example, that Lessing's approval of the character of the hero in Philotas " gives his support to the view that any breach of faith is justified if it furthers the interests of one's country." This is induction from the positive instance, with a ven- geance. And Dr. Garland goes on : " this view has characterised every • German statesman from Frederic the Great to the present day." Surely this is an exaggeration, and somewhat unfortunate.