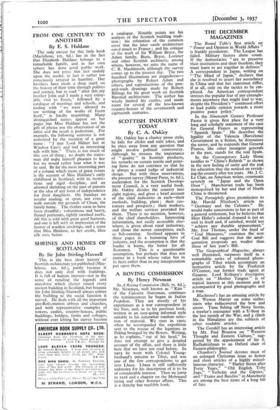 Page 42, 3 December 1937 — THE DECEMBER MAGAZINES The Round Table's first article on "
Close

THE DECEMBER MAGAZINES The Round Table's first article on "

Power and Opinion in World Affairs " is frankly pessimistic. The League has failed. Military factors alone count. If the democracies " are to preserve their institutions and their freedom, they must learn to act together in defence." A correstiondent in Japan, writing on " The Mind of Japan," declares that she is resolved to assert her ascendancy in China and that her statesmen differ, if at all, only on the tactics to be em- ployed. An American correspondent stresses the poptilar fear of any entangle; ments anywhere that might lead to war,: despite the President's " continued effort to lead public opinion towards a more positive peace policy."

In the Nineteenth Century Professor Pastor is given first place for a very long and scholarly statement of the case for General Franco as representing " Spanish _ Spain." He describes the legality of the Valencia (Barcelona) Government as a fiction, he denounces the terror, and he contends that General Franco, like other insurgent generals in the past, stands for the real Spain.

In the Contemporary Lady Hosie' testifies to " China's Rebirth " as shown in the new feeling of unity and the zeal' for education that she noticed on revisit= ing the country after ten years. Mr. J. C. Le Clair, an American writer, comments severely on " Japan and the Open Door " ; Manchurian trade has heed monopolised by her and that of North China is threatened.

The Fortnightly gives prominence to Mr. Harold Nicolson's article on " Germany and the Colonies." He would make concessions to her as part of a general settlement, but he believes that Herr Hitler's colonial demand is not an end in itself and, if satisfied, would -not " achieve any durable appeasement." Mr. Ivor Thomas; under the head of " Coal Measures," examines ihe new Coal Bill and suggests that the amal- gamation proposals are weaker than

those of last year's Bill. -

The Geographical. Magazine, always well illustrated, surpasses itself - in a remarkable series of coloured photo- graphs of Tibet which accompany an instructive article by Sif Frederick O'Connor, our former trade agent at Gyantse. Lord Kelburn's descriptive article on " Mother Yangtse ". is of topical interest at this moment and is accompanied by good photographs and a map.

Blackwood's has an amusing article by Mr. Weston Martyr on some enthu- siasts who rediscovered the bow and arrow. Tuna fishing off--Nova Scotia, a trawler's encounter with a U-boat in the last month of the War, and i climb in. the Himalayas are the. subjects of other readable articles.- The Cornhill has an interesting article by Mr. Paid Brunton on " Western Thought and Eastern Culfure," sug- gested by the appointment of Sir S. Radhakrishnan to an Oxford chair of Eastern philosophy.

Chambers's Journal devotes most of an enlarged Christmas issue to fiction and short articles of a highly miscel- laneous character. " Harley Street after Forty Years," " Old English Toby Jugs," " Yetholm and the Gipsies," - -and "Trams and Bandits " in Manchuria are among the best items of a long bill of fare.