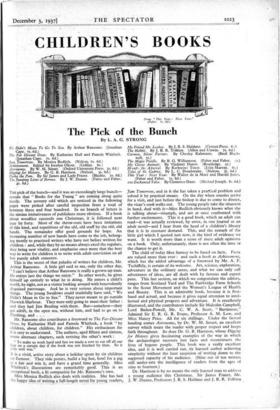 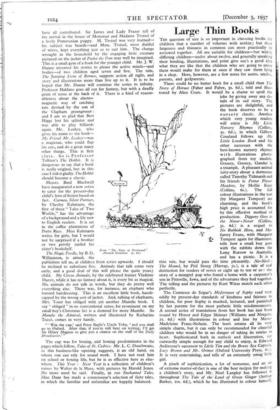 The Pick of the Bunch

THE pick of the bunch—and it was an exceedingly large bunch— reveals that " Books for the Young " are coming along quite nicely. The seventy odd which are noticed in the following pages were picked after careful inspection from a total of between three and four hundred. In no branch of letters is the simian imitativeness of publishers more obvious. If a book about woodlice succeeds one Christmas, it is followed next year by forty. Most of the throw-outs have been imitations of this kind, and repetitions of the old, old stuff by the old, old hands. The remainder offer good grounds for hope. An increasing number of new hands have come to the job, belong- ing mostly to practised writers who have not before written for children : and, while they by no means always excel the regulars, they bring new vitality, and emphasise once more that the best way to write for children is to write with adult conviction on all but purely adult concerns.

This is the secret of that paladin of writers for children, Mr. Arthur Ransome. A little girl said to me, only the other day, " I can't believe that Arthur Ransome is really a grown-up man. He enjoys just the things we enjoy." In other words, he gives himself up entirely to what he is doing. He enters a child's world, by right, not as a visitor looking around with benevolently disguised patronage. And he is very serious about important things. The young Swallows could truthfully have said, " We Didn't Mean to Go to Sea." They never meant to go outside Harwich Harbour. They were only going to meet their father : and they had Jim Brading with them. But—somehow—they got adrift, in the open sea, without him, and had to go on to Flushing, and . . .

Mr. Ransome also contributes a foreword to The Far-Distant Oxus, by Katharine Hull and Pamela Whitlock, a book " by children, about children, for children." His enthusiasm for it is easy to understand. The authors, aged fifteen and sixteen, wrote alternate chapters, each revising the other's work : " To make us work hard and fast we made a vow to cut off all our hair on a certain day if the book was not finished by then. So it jolly well was."

It is a vivid, active story about a holiday spent by six children on Exmoor. They ride ponies, build a log hut, bowl for a pig at a fair and win it, and have a grand time generally. Miss Whitlock's illustrations are remarkably good. This is an exceptional book, a fit companion for Mr. Ransome's own.

too Enchanted Tales. By Clemente Dane. (Michael Joseph. Ss. 6d.) Jam Tomorrow, and in it she has taken a practical problem and solved it by practical means. On the day when cousins arrive for a visit, and just before the bishop is due to come to dinner, the vicar's cook walks out. The young people take the situation in hand, deal with it—Miss Redlich obviously knows what she is talking about—triumph, and are at once confronted with further excitements. This is a good book, which an adult can read—it was actually reviewed, by error, in one journal as an adult novel—and I hear from the head of a children's library that it is in constant demand. This, and the remark of the little girl which I quoted just now, is the kind of evidence we want. It is worth more than a score of mere adult opinions

on a book. Only, unfortunately, there is not often the time or the chance to get it.

The child of today likes fantasy to be based on facts. Facts are valued more than ever : and such a book as Achievement, which has the added advantage of a foreword by Mr. A. F. Tschiffely, is certain of its welcome. Art, science, exploration,

adventure in the ordinary sense, and what we can only call adventures of ideas, are all dealt with by famous and expert pens. This last section, on which we congratulate the editors, ranges from Scotland Yard and The Fairbridge Farm Schools to the Scout Movement and the Women's League of Health and Beauty. This is an admirable book, because it is first- hand and actual, and because it gives equal attention to intel- lectual and physical progress and adventure. It is excellently

illustrated, and the contributors include Sir Malcolm Campbell, Lord Baden-Powell, Mr. C. W. A. Scott, " Bartimeus," Admiral Sir E. R. G. R. Evans, Professor A. M. Low, and Miss Nancy Price. All for six shillings. Under the factual heading comes Astronomy, by Dr. W. M. Smart, an excellent survey which treats the reader with proper respect and keeps faith throughout. So does Dr. G. B. Harrison, whose Digging for History gives fascinating examples of the way in which the archaeologist recovers lost facts and reconstructs the lives of bygone people. This book was a really excellent idea, and it is well carried out, its learned author achieving simplicity without the least suspicion of writing down to the supposed capacity of his audience. (Nine out of ten writers still under-rate the intelligence of readers from the ages of

have all contributed. Sir James and Lady Frazer tell of the arrival in the house of Monsieur and Madame Troisel of a lively Pomeranian puppy. M. Troisel was very learned. his subject was beards—and Mme. Troisel, most dutiful of wives, kept everything just so to suit him. The change wrought in the household by the engaging little creature pictured on the jacket of Pasha the Pom may well be imagined. This is a small gem of a book for the younger child. Mr. J. W. Dunne invented his stories to please the active minds—and bodies—of two children aged 'seven and five. The title, The Jumping Lions of Borneo, suggests action all right, and story and illustrations more than live up to it. It is to be hoped that Mr. Dunne will continue the series to infinity. Professor Haldane goes all out for fantasy, but with a deadly grain of sense at the back of it. There is a kind of reason- ableness about the electro- magnetic way of catching rats devised by the son of the Clapham greengrocer : and I am so glad that Bert Higgs lost his splinter and was able to play billiards again. Mr. Leakey, who gives his name to the book— My Friend Mr. Lcakey—was a magician, who could flap his cars, and do a great many other things. This is first class. So is Professor Tolkien's The Hobbit. It is dangerous to say that a book is really original, but in this case I risk it gladly. The Hobbit should become a classic. Messrs. Basil Blackwell have inaugurated a new series to cater for the present-day child's love of fiction based on fact. Carmen, Silent Partner, by Chesley Kahmann, the first of these " Tales of Two Worlds," has the advantage of a background and a life new to English readers. It is set in the coffee plantations of Porto Rico. Miss Kaiunarm writes for girls, but I would not be surprised if a brother or two privily raided his sister's bookshelf.

The Magic Poodle, by B.G.

Williamson, is aimed, the publishers tell us, at children from seven upwards. I should be inclined to substitute five. Animals that talk come very early, and a good deal of this will please the quite young child. My Circus Animals, by the celebrated trainer Vladimir Durov, while it has no fantasy about it, is every bit as magical. His animals do not talk in words, but they do pretty well everything else. There was, for instance, an elephant who learned hairdressing. This is an excellent little book, handi- capped by the wrong sort of jacket. And, talking of elephants,

Mrs. Tozer has obliged with yet another Mumfie book. I say " obliged " in no conventional sense, for prominent on my small boy's Christmas list is a demand for more Mumfie. So Mumfie the Admiral, written and illustrated by Katharine. Tozer, comes in very handy.

" ' Win the cup,' said Peter Baylis's Uncle Toby, and you shall- go to Oxford. After that, if you're still bent on writing, I'll get. Sir Hilary Magnus to give you a chance on the staff of the Daily Broadcaster.' "

The cup was for boxing, and boxing predominates in the pages which follow, Tales of St. Cedrics. Mr. L. C. Douthwaite, as this business-like opening ,suggests, is an old hand, on whom one can rely for sound work. I have not read him on school or boxing life, but he is as effective here as else- where. This Year : Next Year is a collection of children's verses by Walter de la Mare, with pictures by Harold Jones.

No more need be said.' Finally, in roo Enchanted Tales,

Miss. Dane has made a connoisseur's selection of fairy tales, in which the familiar and unfamiliar are happily balanced.