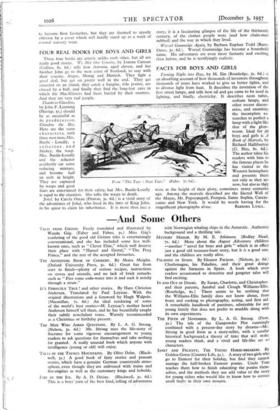 -TALES FROM GRIMM. Freely translated and illustrated by Wanda Gig. (Faber and Faber, 5s.) Miss Gag's rendering of the good old Grimm tales is entertainingly conversational, and she has included some less well- known ones, such as " Clever Elsie," which well deserve their place with " Hansel and Gretel," " The Frog Prince," and the rest of the accepted favourites.

THE ADVENTURE Boox OF COOKERY. By Moira Meighn. (Oxford University Press, 3s. 6d.) Great fun from start to finish—plenty of serious recipes, instructions on stoves and utensils, and no lack of brisk remarks such as " Fizz some soda-water into it and suck it noisily through a straw."

IT'S PERFECTLY TRUE ! and other stories. By Hans Christian Andersen. Translated by Paul Leyssac. With the original illustrations and a foreword by Hugh Walpole. (Macmillan, 7s. 6d.) An ideal rendering of some of the world's best stories—M. Leyssac's mother heard Andersen himself tell them, and he has beautifully caught their subtly nonchalant tones. Warmly recommended as a Christmas or birthday present.

Tim MAN WHO ASKED QUESTIONS. By L. A. G. Strong. (Nelson, 3s. 6d.) Mr. Strong uses the life-story of Socrates for some vigorous encouragement to young readers to ask questions for themselves and take nothing for granted. A really unustial book which anyone with intelligence (young or old) will enjoy.

'I'Aus OF THE TAUNUS MOUNTAINS. By Olive Dehn. (Black- well, 5s.) A good book of fairy stories and peasant stories, which have a genuine German countryside atmo- sphere, even though they are enlivened with trains and fire-engines as well as the customary kings and kobolds.

FIRE IN THE IcE. By A. D. Divine. (Blackwell, 3s. 6d.) This is a boys' yam of the best kind, telling of adventures with Norwegian whaling ships in the Antarctic. Authentic background and a thrilling tale.

MYSTERY MANOR. By M. E. Atkinson. (Bodley Head, 7s. 6d.) More about the August Adventure children —another " novel for boys and girls " which is in effect just a good old treasure-hunt story, but it is a good one, and the children are really alive.

PALADINS IN SPAIN. By Eleanor Farjeon. (Nelson, 35. 6d.) Charlemagne, his Paladins, and their great' doings against the Saracens in Spain. A book which even readers accustomed to detective and gangster tales will find exciting.

IN AND Our OF Doom. By Susan, Charlotte, and Christopher, and their parents, Amabel and Clough Williams-Ellis. (Routledge, 6s.) There seems to be nothing that the Williams-Ellis family does not know about, from boats and cooking to photography, acting, and first aid. A remarkable handbook of pastimes, admirable for any young family that does not prefer to muddle along with its own experiments.

THE FtFrx OF NOVEMBER. By L. A. G. Strong. (Dent, 5s.) The tale of the Gunpowder Plot cunningly combined with a present-day story by dreams—Mr. Strong in good form as a story-teller, with a careful historical background, a theory of time that will make young readers think, and a vivid and life-like set o f characters.

JANET AND FELICITY, THE YOUNG HORSE-BREAKERS. By Golden Gorse (Country Life, 5s.). A story of two girls who go to Exmbor for their holiday, but find they cannot manage the half-broken Exmoor ponies. Uncle Tom teaches them how to finish educating the ponies them- selves, and the methods they use add value to' the story for young riders who would like to know how to correct small faults in their own mounts.