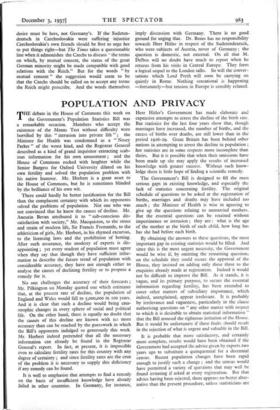 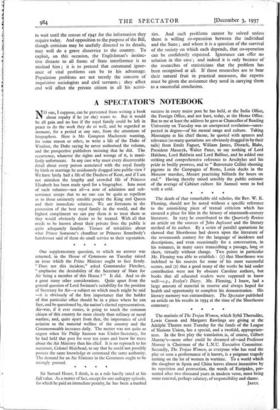 THE debate in the House of Commons this week on the Government's Population Statistics Bill was a remarkable occasion. Members who accept the existence - of the Means Test without difficulty were horrified by this " intrusion into private life " ; the Minister for Health was condemned as a " Nosey Parker " of the worst kind, and the Registrar General described as a kind of grand inquisitor extracting scab- ious information for his own amusement ; and the House of Commons rocked with laughter while the Senior Burgess for Oxford University dilated on his own fertility and solved the population problem with his native humour. Mr. Herbert is a great asset to the House of Commons, but he is sometimes blinded by the brilliance of his own wit.

There could hardly be better justification for the Bill than the complacent certainty with which its opponents solved the problems of population. Not one who was not convinced that he knew the causes of decline. Mr. Aneurin Bevan attributed it to " sub-conscious dis- satisfaction with society," Mr. Macquisten, to the stress and strain of modern life, Sir Francis Fremantle, to the athleticism of girls, Mr. Herbert, in his rhymed excursus, to the licensing laws and the prohibition of betting. After such assurance, the modesty of experts is dis- appointing ; yet every student of population must agree when they say that though they have sufficient infor- mation to describe the future trend of population with considerable accuracy, they have not enough either to analyse the causes of declining fertility or to propose a remedy for it.

No one challenges the accuracy of their forecasts ; Mr. Pilkington on Monday quoted one which estimates that, at the present rate of decline, the population' of England and Wales would fall to 5,000,000 in loo years. And it is clear that such a decline would bring cata- strophic changes in every sphere of social and political life. On the other hand, there is equally no doubt that the causes of this decline are known with no more accuracy than can be reached by the guesswork in which the Bill's opponents indulged so generously this week. Mr. Herbert indeed pretended that all the necessary information can already be found in the Registrar General's report. In fact, at present, it is impossible even to Calculate fertility rates for this country with any degree of certainty ; and since fertility rates are the crux of the problem it is necessary to supply this deficiency if any remedy can be found.

It is well to emphasise that attempts to find a remedy on the basis of insufficient knowledge have already failed in other countries. In Germany, for instance, Herr Hitler's Government has made elaborate and expensive attempts to arrest the decline of the birth rate. But statistics for the last four years show that, though marriages have increased, the number of births, and the excess of births over deaths, are still lower than in the period 1926-29. Great Britain has been behind other nations in attempting to arrest the decline in population ; her statistics are in some respects more incomplete than theirs. But it is possible that when their omissions have been made up she may apply the results of increased knowledge with greater success. Without such know- ledge there is little hope of finding a scientific remedy.

The Government's Bill is designed to fill the most serious gaps in existing knowledge, and especially the lack of statistics concerning fertility. The original schedule of questions to be asked at the registration of births, marriages and deaths may have included too much ; the Minister of Health is wise in agreeing to give up the questions relating to unmarried mothers. But the essential questions can be retained without impertinence or intrusion ; they are : what is the age of the mother at the birth of each child, how long has has she had before each birth.

By obtaining the answers to these questions, the most important gap in existing statistics would be filled. And since this is the most urgent necessity, the Government would be wise if, by omitting the remaining questions on the schedule they could secure the approval of the House, they insisted on adding only these three to the enquiries already made at registration. Indeed it would not be difficult to improve the Bill. As it stands, it is vague, and its primary purpose, to secure the essential information regarding fertility, has been extended to cover other matters of subsidiary importance, which indeed, unexplained, appear irrelevant. It is probably by irrelevance and vagueness, particularly in the clause authorising questions on " any other matter with respect to which it is desirable to obtain statistical information " that the Bill aroused the righteous irritation of the House. But it would be unfortunate if these faults should result in the rejection of what is urgent and valuable in the Bill.

It is probable that more satisfactory, and certainly more complete, results would have been obtained if the Government had accepted the advice given by experts two years ago to substitute a quinquennial for a decennial census. Recent population changes have been rapid enough to justify such a change ; and the census would have permitted a variety of questions that may well be found irritating if asked at every registration. But that advice having been rejected, there appears no better alter- native than the present procedure, unless statisticians are to wait until the census of 1941 for the information they require today. And opposition to the purpose of the Bill, though criticism may be usefully directed to its details, may well do a grave disservice to the country. To exploit, on this occasion, the Englishman's instinc- tive distaste to all forms of State interference is to mislead him ; it is to pretend that communal ignor- ance of vital problems can be to his advantage. Population problems are not merely the concern of inquisitive sociologists and civil servants ; they affect and will affect the private citizen in all his activi- ties. And such problems cannot be solved unless there is willing co-operation between the individual and the State ; and where it is a question of the survival of the society on which each depends, that co-operation can be confidently expected. Ignorance can offer no solution in this case ; and indeed it is only because of the researches of statisticians that the problem has been recognised at all. If those researches are to bear their natural fruit in practical measures, the experts must be given the assistance they need in carrying them to a successful conclusion.