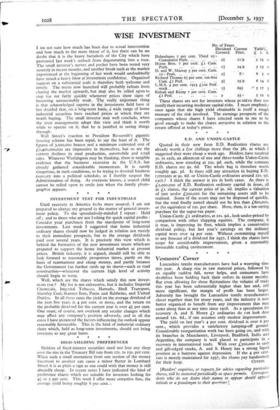 I AM not sure hoW much has been due to actual intervention and how much to the mere threat of it, but there can be no doubt that it is the heavy battalions of the City which have prevented last week's setback from degenerating into a rout. The small investor's nerves and pocket have been tested very severely in recent months, and another break such as the market experienced at the beginning of last week would undoubtedly have struck a heavy blow at inyestniefit confidence. Organised support on a substantial scale is therefore both welcome and timely. The trusts now launched will probably refrain from chasing the market upwards, but may also be relied upon to stop the rot fairly quickly whenever prides- 'show signs of becoming unreasonably weak. The really important thing is that acknowledged _experts in the investment field have at last decided that, on a long-ierm bisis,.a.' wide range of home industrial securities have reached prices at which they are worth buying. The small investor 'mak well conclude, when the trust managements adopt this view and think it worth while to operate on it, that he is justified in seeing things through.

Wall Street's reaction to President Roosevelt's gigantic housing scheme has been tepid, to say the least of it. The figures of 3,000,000 houses and a minimum estimated cost of £2,400,000,000 are impressive in themselves, but so are the current declines in steel production, automobile and retail sales. Whatever Washington may be thinking, there is tangible evidence that the business recession in the U.S.A. has already gathered considerable momentum. It is surely dangerous, in such conditions, to be trying to dovetail business recovery into a political schedule, as I frankly suspect the Administration of doing. As everyone knows, a soured child cannot be relied upon to smile just when the family photo- grapher appears.