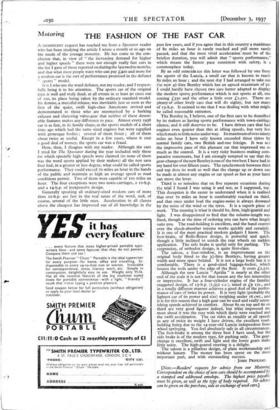 Page 52, 3 December 1937 — Motoring THE FASHION OF THE FAST CAR A SIGNIFICANT request
Close

Motoring THE FASHION OF THE FAST CAR A SIGNIFICANT request

has reached me from a Spectator reader who has been studying the article I wrote a month or so ago on the needs of the average motorist. He has come to the con- clusion that, in view of " the increasing demand for higher and higher speeds " there were not enough really fast cars in the list I gave of those reported on during the last twelve months, and that what most people want who can pay &Do and more for a modern car is the sort of performance promised in the defunct " sports " model. , - It is I who use the word defunct, not my reader, and I respect- fully bring it to his attention. The sports car of the original type is well and truly dead, at all events in at least 90 cases out of too, its place being taken by the ordinary standard model. Its demise, a merciful release, was inevitable just so soon as the first of the quiet, swift high-class Americans arrived and demonstrated to those who are mesmerised by a barking exhaust and clattering valve-gear that neither of these detest- able features makes any difference to pace. Almost every 1938 car is as fast, in its family shape, as the sports models of a short time ago which had the same sized engines but were supplied with grotesque bodies ; several of them faster ; all of them about twice as useful. Except in a few cases, where it cost a good deal of money, the sports car was a fraud.

Here, then, I disagree with my reader. Although the cars I tried for The Spectator during the year included only three for which specially high speeds were claimed (to none of them was the word sports applied by their makers) all- the rest save four had, in a greater or less degree, what could be called sports performance. They could exceed 70 miles an hour in the hands of the public and maintain as high an average speed as road conditions permit. Two of them were capable of too miles an hour. The four exceptions were two town-carriages, a to-h.p. and a 14-h.p. of inexpensive design.

Generally speaking all ordinary-sized modern cars of more than 12-h.p. are fast in the real sense of the word, and, of course, several of the little ones. Acceleration in all classes above the cheapest has improved out of all knowledge in the past few years, and if you agree that in this country a maximum of 8o miles an hour is rarely reached and still more rarely • passed, and that the most vivid acceleration'must be of the briefest duration, you will admit that " sports performance," which means the fastest pace consistent with safety, is a commonplace today.

: By an odd coincide ice this letter was followed by one from the agents of the Lancia, a small car that is known to reach 8o mites an hour ; and the next day I had arranged to take out the new 41-litre Bentley which has an agreed maximum of 9o. I could hardli have chosen two cars better adapted to display the modem sports, performance which is not sports at all, one costing £330 and the other a little over £1,503. There are plenty of other. lively cars that will do eighty; but not many of 13-h.p. It seemed to me that I was dealing with what might be called reasonable extremes.

The Bentley _is, I believe, one of the first cars to be described by its makers as having sports performance with town-carriage silence, and it still deserves to be. I have driven cars that had engines even quieter than this at idling speeds, but very few which made so little noise under way. Its maximum of over ninety miles an hour I have only known exceeded three times by normal family Cars, two British and one foreign. It was nct the impressive pace of this pleasant car that impressed me so much as the control. It is a very risky business making com- parative statements, but I am strongly tempted to say that the gear-change of the new Bentley is one of the two best I have had in my hand for over fifteen years. The synchromesh between third and top does its work so well that the change up or down can be made at almost any engine or car speed as fast as your hand can move the lever.

Third is so noiseless that on five separate occasions during the trial I found I was using it and not, as I supposed, top. This deception is the easier to understand when it is realised that over 70 miles an hour is comfortably reached on third, and that once under load the engine-noise is always drowned by the noise of the wind or the tyres. It is a superb piece of Work. The steering is What-it should be, firm, high:keared and light. I was disappointed to find that the column-length was fixed, though at the time of ordering you can have what length suits you. The road-holding is -excellent, and the hand control over the shock-absorber tension works quickly and certainly. It is one of the most practical modem gadgets I know. The foot-brake, of Rolls-Royce design, is powerful and quick, though a little inclined to scotch the rear wheels on sudden ' application. The side brake is useful only for parking. The suspension, of orthodox design, is quite first-class.

The saloon, a four-window, is an improvement on the original body fitted to the 31-litre Bentleys, having greater width and more space behind. It is not a large body but it is comfortable. There is a good-sized luggage-locker, which houses the tools under the edge of the floor. It costs D,510.

Although the new Lancia Aprilia " is nearly at the other end of the scale it is not for that reason any the less interesting or impressive. It has a four-cylinder engine of the familiar staggered design, of 13-h.p. (1,352 c.c.), taxed at £9 15s., and in a totally different manner achieves a good deal of the perfor- mance of cars of twice its power. It is very light (probably the lightest car of its power and size) weighing under 16 cwt., and it is for this reason that a high gear.cini be used arid really- aston- ishing speeds achieved in comfort. About So on-top and 6o on third are very good figures indeed; but wliat` impressed me most about it was-the ease with Which these :were reached and the swift acceleration. The car rides as ,steadily at all speeds as any of.twice its weight I have driven, the excellent road- holding being due to the 14-year;old Lancia-independent front wheel springing. You feel absolutely safe in all circumstances. The foot-brake ,is among the three best I have used, but the side brake is of the modem type; for parking only. The gear- change is excellent, swift- and light and the lower gears make little noise. The high-geared steering is a delight. The saloon is a pillarless design, of plain workmanship and without luxury. The money has been spent on the most important part, and with outstanding success.

[Note.—Readers' requests for . advice from our Motoring Correspondent on the choice of new cars should be accompanied by a stamped and addressed envelope. The highest price payable must be given, as well as the type of body required. No advice • can be given on the purchase, sale or exchange of used cars]