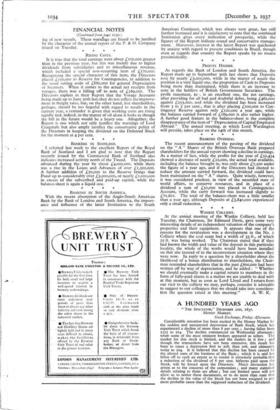 As regards the -Bank of London and South America, the Report made up to September 30th last shows that Deposits rose by nearly £3,000,000, while in the matter of assets the position is a very liquid one, the proportion of Cash to Deposits being more than maintained, while there is an increase to note in the holding of British Government Securities. The profit statement, to N, is an excellent one, the net earnings, after providing for all bad and doubtful debts, being £462,000 against £253,00o, and while the dividend has been increased from 3 to 5 per cent., that is after placing £20o,000 to Con- tingency Reserve against only £120,000 a year ago, while the balance carried forward of £169,000 is also rather higher. A further good feature in the balance-sheet is the complete disappearance of the item of " Depreciation of Capital Employed Abroad." The annual meeting, at which Lord Wardington will preside, takes place on the 14th of this month.