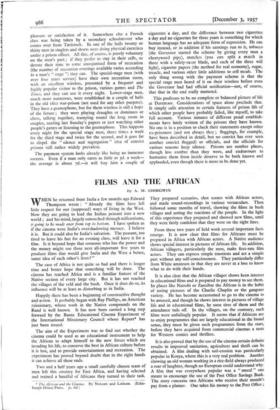 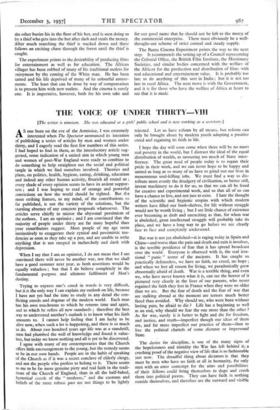 FILMS AND THE AFRICAN

By A. M. CHIRGWIN

WHEN he returned from India a few months ago Edward Thompson wrote : " Already the films have left little respect for our (supposed) ways of living in the West. Now they are going to lead the Indian peasant into a new world ; and hisinind, largely untouched through millenniums, is going to be made over from top to bottom. I have spoken as if the cinema were India's overshadowing menace. I believe it is. But it could also be India's salvation. The peasant, too tired to leave his but for an evening class, will leave it for a film. Is it beyond hope that someone who has the power and the money might use these next all-important five years to produce films that would give India and the West a better, saner idea of each other's lives ? "

The case of Africa is not quite so bad and there is longer time and better hope that something will be done. The cinema has reached Africa and is a familiar feature of the Native section of every large city. But it has not 'reached the villages of the veld and the bush. Once it does do so, its influence will be at least as disturbing as in India.

Happily there has been a beginning of constructive thought and action. It probably began with Ray Phillips, an American missionary, whose work in the Native compounds on the Rand is well known. It has now been carried a long step forward by the Bantu Educational Cinema Experiment of the International Missionary Council whose Report* has just been issued.

The aim of the Experiment was to find out whether the cinema could be used as an educational instrument to help the African to adapt himself to the new forces which are invading his life, to conserve the best in African culture before it is lost, and to provide entertainment and recreation. The experiment has proved beyond doubt that in the right hands it can achieve all these ends.

Two and a half years ago a small carefully chosen team of men left this country for East Africa, and having selected and trained a handful of Africans they turned to their task.

* The African and the Cinema. By Notcutt and Latham. (Edin- burgh House Press. 3s. 6d.) They prepared scenarios, shot scenes with African actors, and made sound-recordings in various vernaculars. Then followed some months of travel, showing the -films in bush villages and noting the reactions of the people. In the light of this experience they prepared and showed new films, until they were fairly confident that they were on the right lines.

From these two years of field work several important facts emerge. It is now clear that films for Africans must be prepared in Africa with African actors. A Native audience shows special interest in pictures of African life. In addition, African villagers, particularly the men, make first-rate film actors. They can express simple emotions and act a simple part without any self-consciousness. They particularly differ from White amateurs in that they are never at a loss to know what to do with their hands.

It is also clear that the African villager shows keen interest in educational films and is prepared to pay money to see them. In places like Nairobi or Zanzibar the African is in the habit of seeing pictures of the Charlie Chaplin or the gangster variety. He has become accustomed to go to the cinema to be amused, and though he shows interest in pictures of village life and in educational films, he soon tires of them and the attendance tails off. In the villages, on the contrary, such films were unfailingly popular. It seems that if Africans are to enjoy programmes that are largely educational in the broad sense, they must be given such programmes from the start, before they have acquired from commercial cinemas a taste for Western comics and thrillers.

It is also proved that by the use of the cinema certain definite results in improved sanitation, agriculture and thrift can be obtained. A film dealing with soil-erosion was particularly popular in Kenya, where this is a very real problem. Another showing an old woman working in a rice-field always produced a roar of laughter, though no European could understand why. A film that was everywhere popular was a " moral " one meant to encourage the use of the Post Office Savings Bank. The story concerns two Africans who receive their month's pay from a planter. One takes his money-to the_Post Office ; the other buries his in the floor of his hut, and is seen doing so by a thief who gets into the but after dark and steals the money. After much searching the thief is tracked down and there follows an exciting chase through the forest until the thief is caught.

The experiment points to the desirability of producing films for entertainment as well as for education. The African villager has been robbed of many of his traditional outlets for enjoyment by the coming of the White man. He has been tamed and his life deprived of many of its colourful amuse- ments. The least that can be done by way of compensation is to present him with new outlets. And the cinema is surely one. It is imperative, however, both for his own sake and for our good name that he should not be left to the mercy of the commercial enterprise. There must obviously be a well- thought-out scheme of strict control and steady supply.

The Bantu Cinema Experiment points the way to the next step. It recommends the setting up of a Council representing the Colonial Office, the British Film Institute, the Missionary Societies, and similar bodies concerned with the welfare of the African for the production and distribution of films with real educational and entertainment value. It is probably too late to do anything of this sort in India ; but it is not too late in rural Africa. The next move is with the Government, and it is for those who have the welfare of Africa at heart to see that it is made.