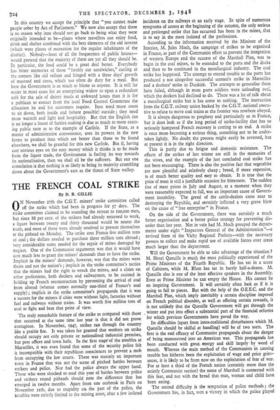 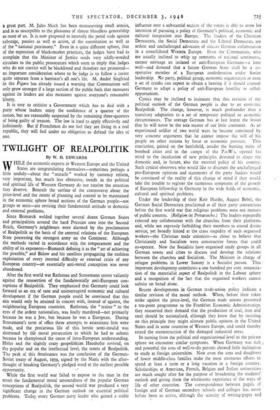 ON November 27th the C.G.T. miners' strike committee called off the strike which had been in progress for 57 days. The strike committee claimed to be sounding the retreat to roo,000 men, but since 88 per cent. of the strikers had already returned to work, a figure between twenty and thirty thousand would be nearer the truth, and most of those were already resolved to present themselves at the pithead on Monday. The strike cost France five million tons of coal ; the dollars needed to purchase three million tons abroad ; very considerable sums needed for the repair of mines damaged by neglect. One of the Communist arguments was that it would have cost much less to grant the miners' demands than to have the strike. Implicit in the miners' demands, however, was that the mines were theirs and not the nation's ; implicit in the strike committee's tactics that the miners had the right to wreck the mines, and a claim on other professions, both dockers and railwaymen, to be assisted in holding up French reconstruction by preventing the arrival of coal from abroad (whence comes normally one-third of France's coal supply); implicit in the strike committee's propaganda that it was a success for the miners if cities were without light, factories without fuel and railways without trains. It was worth five million tons of coal to fight and beat that point of view.

The truly remarkable feature of the strike as compared with those that occurred at the same time last year is that it did not prove contagious. In November, 1947, strikes ran through the country like a prairie fire. It was taken for granted that workers on strike should occupy not only private or nationalised industrial premises, but post offices and town halls. In the first stage' of the troubles at Marseilles, it was even found that some of the security police felt it incompatible with their republican consciences to prevent a mob from occupying the law courts. There was scarcely an important town in France that was not the scene of pitched battles between strikers and police. Nor had the police always the upper hand. Those who were shocked to read this year of battles between police and strikers round pitheads should note the difference that has emerged in twelve months. Apart from one outbreak in Paris on November tith, due to stupidity on the part of the police, the troubles were strictly limited to the mining areas, after a few isolated incidents on the railways at an early stage. In spite of numerous symptoms of unrest at the beginning of the autumn, the only serious and prolonged strike that has occurred has been in the mines, that is to say in the most isolated of the professions.

According to the information received by the Minister of the Interior, M. Jules I■doch, the campaign of strikes to be organised in France, as part of the Communist effort to prevent the integration of western Europe and the success of the Marshall Plan, was to begin in the coal mines, to be extended to the ports and the docks and then to be continued in the metallurgical industry. The coal strike has happened. The attempt to extend trouble to the ports has produced a not altogether successful seamen's strike in Marseilles and a dockers' strike in Dunkirk. The attempts to generalise them have failed, although in most ports soldiers were unloading coal, which the dockers had declined to do. There was a lot of talk about a metallurgical strike but it has come to nothing. The instruction from the C.G.T. railway union backed by the C.G.T. national execu- tive to refuse to move coal trains at the frontier was nowhere obeyed.

It is always dangerous to prophesy and particularly so in France, but it does look as if the long period of strike-facility that has so seriously hampered French recovery is coming to an end. A strike is once more becoming a serious thing, something not to be under- taken lightly. No doubt the process might easily be reversed, hut at present it is in the right direction.

This is partly due to fatigue and domestic resistance. The effects of the strikes of last winter are still in the memories of the wives, and the example of the just concluded coal strike has not been encouraging. There is also the positive fact that vegetables are now plentiful and relatively cheap ; bread, if more expensive, is of much better qnality and easy to obtain. It is true that the price of meat is still a justifiable occasion for bitterness. The sudden rise of meat prices in July and August, at a moment when they were reasonably expected to fall, was an important cause of Govern- ment instability. The greed of the cattle-dealers came near to destroying the Republic, and certainly inflicted a very grave blow on the cause of "free enterprise" in France.

On the side of the Government, there was certainly a much better organisation and a better police strategy for preventing dis- order than last year. Not in vain had M. Moch grouped the depart- ments under eight "Inspectors General of the Administration "—a revived form of the Vichy Regional Prefects—with the necessary powers to collect and make rapid use of available forces over areas much larger than the department.

Will the Government be able to take advantage of the situation ? M. Henri Queuille is much the most politically experienced of the Prime Ministers of the Fourth Republic. He has sat in a score of Cabinets, while M. Blum has sat in barely half-a-dozen_ M. Queuille also is one of the least effective speakers in the Assembly. Even as Prime Minister he can empty the House. His cannot be an inspiring Government. It will certainly often look as if it is going to fall to pieces. But with the help of the 0.E.E.C. and the Marshall Plan, which imply inevitably a certain discipline imposed on French political disorder, as well as offering certain rewards, it is not unlikely that the Queuille Government will get through the winter and put into effect a substantial part of the financial reforms for which previous Governments have paved the way.

Its difficulties (apart from intra-coalitional disturbances which M. Queuille should be skilful at handling) will be of two sorts. The first is the real efficacy of Communist propaganda about the danger of being manoeuvred into an American war. This propaganda has been conducted with great energy and skill largely by word cf mouth. Whereas the main method of the Communists in causing trouble has hitherto been the exploitation of wage and price griev- ances, it is likely to be from now on the exploitation of fear of war. For at least a third of the French nation (certainly more than the strictly Communist section) the name of Marshall is connected with this fear, and not with the bread that man, woman and child have been eating.

The second difficulty is the temptation of police methods ; the Government has, in fact, won a victory in which the police played

ik great part. M. Jules Moch has been manoeuvring small armies, and is as susceptible to the pleasures of almost bloodless generalship as most of us. It is now proposed to intensify the penal code against sabotage, passive as well as active, of the constitution as well as of the "national patrimony." Even in a quite different sphere, that of the repression of black-market practices,, the judges have had to complain that the Minister of Justice sends very oddly-worded circulars to the public prosecutors which seem to imply that judges who do not convict will be blacklisted and therefore not promoted— an important consideration where to be judge is to follow a career quite separate from a barrister's all one's life. M. Andre Siegfried in the Figaro has already issued a warning that Communism will only grow stronger if a large section of the public feels that measures against its leaders are also measures against everyone's reasonable liberty.

It is easy to criticise a Government which has to deal with a party whose leaders enjoy the confidence of a quarter of the nation, but are reasonably suspected by the remaining three-quarters of being guilty of treason. The law is hard to apply effectively and judiciously. But if Frenchmen do not feel they are living in a real republic, they will feel under no obligation to defend the idea of one.