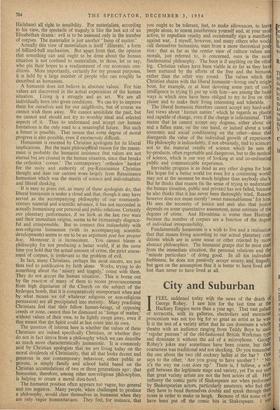 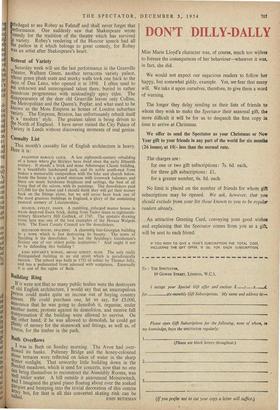 IFEEL saddened today with the news of the death of George Robey. I saw him for the last time at the Hackney Empire more than a year ago. That vast palace of terracotta, with its galleries, electroliers and enormouS proscenium was not too big for so great an artist as he waS' It is the test of a variety artist that he can dominate a who4 theatre with an audience ranging from Teddy Boys to stela ' regular patrons' of the old-fashioned British Workman typo and dominate it without the aid of a microphone. Georl Robey's jokes may sometimes have been coarse, but theft coarseness was traditional and not shocking. Do you remember the one about the two old cockney ladies at the bar ? One says to the other, ' Are you going to have another 7 " N?' it's the way me coat does up.' There is, I believe, a wide gulf between the legitimate stage and variety, yet I'm not sure that great variety artists are not the best actors of all. Hod unfunny the comic parts of Shakespeare are when performed by Shakespearian actors, particularly amateurs, who feel that they have to bend themselves double and speak through their noses in order to make us laugh. Because of this some of Us, have been put off the comic bits in Shakespeare. 1 was !,t rlvileged to see Robey as Falstaff and shall never forget that erformance. One suddenly saw that Shakespeare wrote omedy for the tradition of the theatre which has survived variety. Robey's rendering of the Honour speech had all t e pathos in it which belongs to great comedy, for Robey Was an artist after Shakespeare's heart.

Saturday week will see the last performance in the Granville Theatre, Walham Green, another terracotta variety palace, Whose green plush seats and murky walls took one back to the days of Dan Leno, who opened it in 1898. I often used to See unknown and unrecognised talent there, buried in rather humdrum programmes with misleadingly spicy titles. The disappearance of the dear old Granville leaves only Collins, the Metropolitan and the Queen's, Poplar, and what used to be 'mown as the Moss Empires as homes of London suburban variety. The Empress, Brixton, has unfortunately rebuilt itself In a ' modern' style. The greatest talent is being driven to the North of England. I have never visited the City Palace of Variety in Leeds without discovering moments of real genius.

This month's casualty list of English architecture is heavy. Here it is: s-rnUNTDN HAROLD, LEICS. A late eighteenth-century rebuilding of a house where ihe Shirleys have lived since the early fifteenth century. It stands, a brick and stone Adamesque Classic building, In a beautifully landscaped park, and its noble south-east front makes a memorable composition with the lake and church below. Inside the house is a grand staircase with ironwork balusters and there are many handsome fireplaces and ceilings, the best of all being that of the saloon, with Its paintings. The demolishers paid £12,000 for the house and I should think they will get their money back on the fittings alone, but we will never have back one of the most gracious buildings in England, a glory of the undulating pastoral scenery of Leicestershire.

BELHUS, AVELEY, ESSEX. A rambling, enlarged manor house in warm deep-red Essex brick, dating from Tudor times to eighteenth- century Strawberry Hill Gothick, of 1745. The upstairs drawing room here was one of the best examples of the Horace Walpole style. The Essex County Council are the demolishers.

HOLYROOD HOUSE, SPALDING. A charming late-Georgian building in a town which is fast destroying its beauty. The town of Spalding is the demolisher. Is not the Spalding's Gentlemen's Society one of our oldest polite institutions ? And ought it not to be defending this building ?

KING EDWARD'S SCHOOL, BROAD STREET, RATH. The only really distinguished building in an old street which is paradoxically narrow. The school was built in 1752 of ashlar by Thomas Jelly, and has a pedimented front adorned with sculptures. Externally it is one of the sights of Bath.

building Ring If it were not that so many public bodies were the destroyers of old English architecture, I would say that an unscrupulous person could make quite an income out of buying country houses, He could purchase one, let us say, for £5,000, announce that he was going to demolish it, organise, under another name, protests against its demolition, and receive full ectupensation if the building were allowed to survive. On the other hand, if he was allowed to demolish, he could get plenty of money for the stonework and fittings, as well as, of course, for the timber in the park.

Bath Overflows . I was in Bath on Sunday morning. The Avon had over- lowed its banks. Pulteney Bridge and the honey-coloured ;tone terraces were reflected on lakes of water in the sharp !Pinter sunlight. That unworthy little building down in the Hooded meadows, which is used for concerts, now that no one att bring themselves to reconstruct the Assembly Rooms, was Well under water. A bill outside it announced Moiseiwitsch, and I imagined the grand piano floating about over the soaked parquet and bumping into the trivial decoration of this outsize unnY hut, for that is all this converted skating rink can be called.