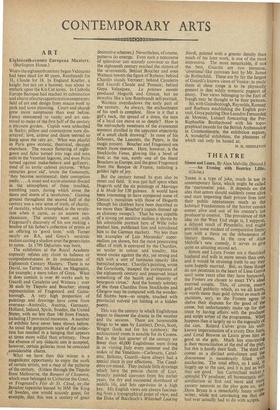 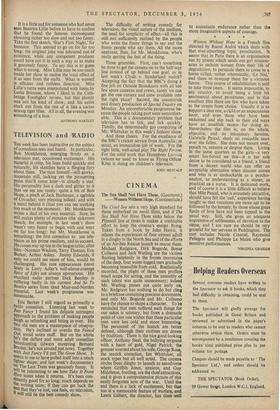 Simon and Laura. By Alan Melville. (Strand.) —An Evening with Beatrice Lillie. (Globe.)

THERE is a type of joke, much in use in contemporary farce, which might be called the !marionette' joke. It depends on the idea that actors should suddenly come alive and start importing their private lives into their public appearances much as the habitual Frankenstein of the horror comics comes alive and out of his creator's (or producer's) control. The prevalence of this idea on the West End stage is, I suppose, a delayed result of Pirandello, and might provide some student of comparative litera- ture with a thesis on the debasement of literary themes. In the case of Alan Melville's new comedy, it serves to give quite an amusing second act. Simon and Laura Foster are a theatrical husband and wife in more senses than ono* and it would be straining truth to say they were happily married. But, as these thing do not penetrate to the heart of Lime Grove until some years after they have happened; the Fosters are chosen to enact TV's id married couple. This, of course, means gold and publicity which, as we all knca, is worth more than gold (about as much as platinum, say), so the Fosters agree to shelve their disputes for the good of the cause, but unfortunately make up for this truce by having affairs with the producer and script writer of the programme. What happens then is largely up to the ingenuity of the cast. Roland Culver gives his well' known impersonation of a crusty Don Juan, and Coral Browne as Laura gives him ae good as she gets. Much less convincing is their reconciliation at the end of the plaY,t but this is hardly their-fault. The third act comes as a distinct anti-climax and ttta denouement is nauseously filled Wit" saccharine. The total effect, as I said, as largely up to the cast, and it is just as We' they are good. lan Carmichael makes splendid TV producer, all bureaucratic sel satisfaction at first and more and null anxiety neurosis as the play goes on, an Dora Bryan is a remarkably funny script' writer, while not convincing me that sly had ever actually had to do with scripts.

It is a little sad for someone who had never Been Beatrice Lillie before to have to confess that he found the famous inconsequent clowning rather too slow and not too funny. Take the first sketch, 'Star's First Night,' for Instance. This seemed to go on for far too long; the original joke was laboured out of existence, while any competent producer could have cut it in such a way as to make it genuinely funny. To say this is to guess What is wrong. Miss Lillie may be too much inside her show to realise the total effect of it as seen from the stalls. What is wanted is efficient and ruthless direction. Miss Lillie's turns were interpolated with items by Leslie Bricusse, whom I liked in the Cam- bridge Footlights' review, but this plainly was not his kind of show; and his satire stuck out from the rest of it like a cactus among tiger lilies. All in all, the evening was something of a loss.