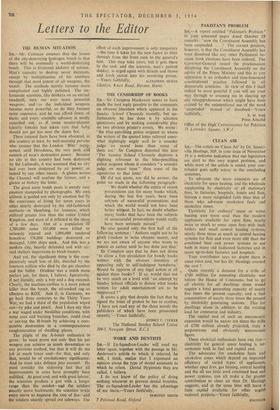 THE HUMAN SITUATION SIR,—Mr. Coleman assumes that the lesson of the city-destroying Ijydrogen bomb is that there will be eventually a world-destroying bomb. This is irrational idolatry of science. Man's capacity to destroy never increases, except by multiplication of his numbers through that most potent of all weapons, the womb. The methods merely become more complicated and highly polished. Thc un- fortunate scientists, like donkeys on an eternal treadmill, turn out ever more powerful weapons; and as the individual weapons become more powerful, so do they become more expensive, and he can afford fewer of them; and every scientific advance is neatly cancelled out, as if some master-planner (clearly female) had taken care that baby should not get too near the damn fire.

These rational facts have been obscured, in this country at least, by well-meaning persons who assume that the London ' Blitz' repr$;- sented, until Hiroshima, the very peak and summit of man's destructive power. Because no city in this country had been destroyed by the Luftwaffe, it was assumed that no city had ever been dest;,oyed by air power; or indeed by any other means. A glance across the Channel will confute the former, and a glance at history the latter.

The great atom bomb panic is merely easy emotion stampeded by photographs. My own attitude is guided not only by emotion but by the experience of living for seven years in cities utterly destroyed by the old-fashioned methods—in Hamburg, for instance, which suffered greater loss than the entire United Kingdom, and most of it inflicted in the space of a few days. Out of a population a 1,700,000 some 105,000 were killed or seriously injured and 1,000,000 rendered homeless; 556,000 buildings destroyed or damaged, 3,000 ships sunk. And this was a modern city, heavily defended and with air- raid shelters impervious to block-busters.

And yet, the significant thing is the com- paratively small loss•of life, dwarfed by the fourteen million who died by the gas chamber and the bullet. Oradour was a much more perfect job, for there, I believe, figuratively, if not literally, only a boy and a dog escaped. Clearly, the machine-carbine is a more potent killer than the bomb, the oil-soaked rag as effective as RDX. And if, in Germany, we go back three centuries to the Thirty Years War, we find a third of the population wiped out—by pike and pistol. And I dare say that a war waged under Neolithic conditions, with stone axes and. burning branches, could rival or out-top the H-bomb by achieving a com- parable destruction in a contemporaneous conglomeration of dwelling places.

effect of each improvement is only temporary —the time it takes for the new factor to filter through from the front rank to the general's tent. This may take years, but it gets there in the end; and the scientist, man's patient donkey, is urged again with threats and blows and fresh carrot into his revolving prison.