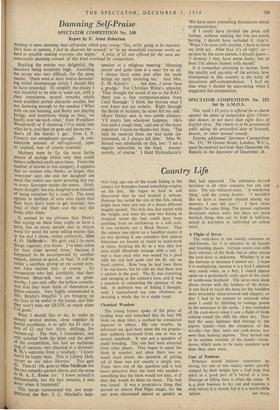 Nothing is more damning than self-praise which goes wrong: 'Yes, we're going to be married. He's been so patient, I feel he deserves his reward,' or ' In my household everyone works as hard as possible making everyone else happy.' A prize of £5 was offered for the most un- onsciously damning remark of this kind overhead by competitors.

Reading the entries was delightful, the tandard being extremely high. Awarding e prizes was very difficult, for the same son. There were at least twelve devastat- ing verbal boomerangs which I should like have rewarded. To simplify the choice I as thankful to be able to weed out, with a dear conscience, several remarks which ere excellent potted character studies, but of damning enough to the speaker ('What ith me not hunting, and Bunty not playing ridge, and everybody being so busy, we hardly ever see each other,' from Wyndham Woodward) or if damning ('I've made him hat he is, and then he goes and leaves me- t's all the thanks I get,' from J. P. myn) not complacent enough. A con- IF:

siderable amount of self-approval, open or implied, was of course essential.

Mothers were by far the most fertile source of sayings which. only they could believe reflected credit upon them. From the number of entries in this category, it appears- that no woman who thinks, or hopes, that `everyone' says she and her daughter are more like sisters can resist pointing this out to every Spectator reader she meets. (Irrel- evant thought: has any daughter ever boasted of being mistaken for a sister?) The, same applies to mothers of sons who claim that their boys don't want to get married—too fond of their old Mum and the way she looks after them.

It seemed to me obvious that Mum's best saying on these lines ought to have a Prize, but so many people sent in almost word for word the same telling entries that in the end I chose, rather arbitrarily, Miss J. 0. McBryde's: 'My girls and I do most things together, you know. I've been taken for their sister several times,' because it happened to be accompanied by another remark, almost as good, or bad: 'It will be rather a sacrifice, giving up my career now, and John realises that, of course.' To competitors who feel, justifiably, that their reported Mum-talk was just as prize- worthy, I can only offer the hollow consola- tion that they must think of themselves as fellow-winners. Very highly commended is Mrs. Bredin's' dreadful 'I am bringing up my boys to be useful in the house, and then they won't miss me QUITE so much when I'vd gone.'

What I should like to do, in order to reward several entries, close together in horrid excellence, is to split the £5 into a first of £2 and two thirty shillings, for runners-up. The best, 1 considered, not Only satisfied both the letter and the spirit of the competition, but had an authentic „ring of menace, very pleasing at a distance: '• It's welcome from a landlady: 'I know You'll be happy here. This is Liberty Hall, except no one takes liberties.' This gets 42- Then £1 10s. goes to Miss McBryde for the two remarks quoted above, and the same to H. A. C. Evans for: 'I know nobody's indispensable, but the fact remains, I was away when it happened.' This leaves' unrewarded but not unap- preciated the Rev. J. C. Mitchell's lady- speaker at a religious meeting: 'Morning prayer and quiet time is a must for us all. I always have mine just after the maid brings my early morning tea.' And Mrs. E. M. Kemp's: . . but then, I never bear a grudge.' For Christian White's splendid, 'They thought the world of me in the RAF,' there was a fine companion-piece from Cecil Ramage: 'I think the bravest man I ever knew was my orderly. Right through the Battle of Arnhem, he never left my side.' Major Dicker sent in two subtle stinkers: 'I'll marry him whatever happens. He's had such a rough time,' and one of the many ingenious I-want-no-thanks-but lines, 'The help he received from me was- quite dis- interested, as I always tell him.' Miss W. Stroud was admirable on this, too: 'I am a regular subscriber to the fund. Anony- mously, of course.' 1 liked Hydrocharis's:

'We have most interesting discussions about pronounciation.'

If I could have divided the prize still further, without making the bits not worth having, I should have included E. Guy's: 'When I'm cross with anyone, I have to have my little say. After that, it's all right,' or— spoken by the same person, I should guess- daresay I may have some faults, but at least I'm always honest with myself.'

It is somewhat alarming to realise, from the quality and quantity of the entries, how widespread in this country is the habit of incautious self-commendation. I had no idea what I should be uncovering when I suggested this competition.