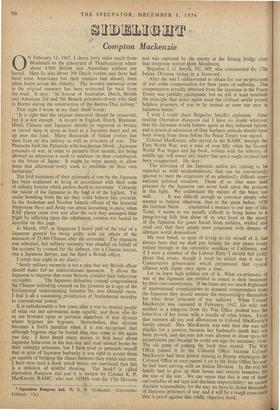 0 N February 11, 1947, I drove forty miles south from Moulmein to the graveyard of Thanbyuzayat where about 4,000 British and Australian soldiers are buried. Here lie also about 200 Dutch victims and there had been some Americans but their remains had already been taken home across the. Atlantic. The wooden memorial cross in the original cemetery has been re-erected far back from the road. It says: ' In honour of Australian, Dutch, British and American 3rd and 5th Branch prisoners-of-war who died in Burma during the construction of the Burma-Thai railway.'

That night I wrote in my diary these words: ' It is right that the original memorial should be preserved, but it is, not enough. A record ift English, Dutch, Burmese, Hindi, Chinese and Japanese should be engraved in bronze or carved deep in stone as hard as a Japanese heart and set up near the road. Many thousands of Indian coolies lost their lives on this railway as well as prisoners of war. The Pharaohs built the Pyramids with less human blood. Japanese prisoners of war, in order to preserve their morale, are being allowed an afternoon a week to meditate on their contribution to the future of Japan. It might be more seemly to allow them that afternoon i every week to meditate on their own barbarism.'

The foul treatment of their prisoneis of war by the Japanese has been explained as being in accordance with their code of military honour which prefers death to surrender. Certainly the valour of the Japanese.in the field is of the highest. Yet under bombing from the air they could behave like cowards. In the Andaman and Nicobar Islands officers of the Imperial Nipponese Navy and Army ran about screaming in panic when RAF planes came over and after the raid they assuaged. their fright by inflicting upon the inhabitants tortures too bestial to describe on this page.

In March, 1947, at Singapore I heard part of the trial of a Japanese general for being guilty with six others of the massacre of 25,000 Chinese after the surrender. The massacre was admitted, but military necessity was pleaded on behalf of the accused by counsel for the defence, one a Chinese lawyer, one a Japanese lawyer, and the third a British officer.

I wrote that night in my diary: ' Surely military necessity is not a plea that any British officer should make for an indiscrithinate massacre. It allows the Japanese to suppose that some Britons consider their behaviour excusable. . . . The Japanese defending counsel congratulated the Chinese defending counsel on his presence as a sign of the fundamental understanding between the two Oriental races. I find it all a nauseating prostitution of fundamental morality to conventional justice. and was captured by the enemy at the Sittang bridge after that desperate retreat from Moulmein. Brigadier J. G. Smyth, VC, MP, who commanded the 17th Indian Division writes in a foreword: ' After the war I endeavoured to obtain for our ex-prisoners of war some compensation for their years of suffering. The compensation actually obtained from the Japanese in the Peace Treaty was pitifully inadequate, but we did at least establish the principle that never again must the civilised world permit helpless prisoners of war to be treated as were our men in Japanese hands.' I wish I could share Brigadier Smyth's optimism. After reading Operation Rangoon Jail I have no doubt whatever that the Japanese would behave again as they behaved before, and.a practical admission of their barbaric attitude should have been wrung from them before the Peace Treaty was signed. Colonel MacKenzie, who served in the RAMC through the First World War, was a man of over fifty when the Second World War began and his book, written with the sobriety of middle age,•will assure any reader that not a single incident has been exaggerated. He says: ` The atrocities of the Japanese nation are coming to be regarded as mild misdemeanours, that can be conveniently ignored to meet the exigencies of an admittedly difficult inter- national political situation. Those of us who were held prisoner by the Japanese can never look upon the position in this light. We understand the nature of the beast too well. . . . It was difficult enough to convince people who wanted to believe otherwise, that in the years before 1939 the German Nazis . . . constituted a menace to our way of life. Today it seems to me equally difficult to bring home to a peacploving folk that those of us who lived at the mercy of the Japanese for years found them ruthless, wicked and cruel and that their minds were possessed with dreams of ultimate world domination.'

My own belief, in spite of trying to rid myself of it, has always been that we shall pay bitterly for that peace treaty rushed through in the optimistic sunshine of California, and if I were a member of the Labour Party I should feel guilty about that treaty, though it must be added that it was a Conservative government which perpetrated that cynical alliance with Japan once upon a time. Let us leave high politics out of it. What ex-prisoners of war of the Japanese are entitled to resent is their treatment by their own countrymen. If the latter are too much frightened of international complications to demand compensation from the Japanese they should assume the responsibility themselves for what those prisoners of war suffered. When Colonel MacKenzie was captured in February; 1942, his wife was notified in a telegram from the War Office pushed into the 'letter-box of her home with a bundle of other letters. From that moment all pay and allowances to Colonel MacKenzie's family ceased. Mrs. MacKenzie was told that she was not eligible for a pension because her, husband's death had not been proved, and she,was not even allowed to draw upon his accumulated pay because he could not sign the necessary form. The old game of passing the buck then started. The War Office passed it to the Colonial Office because Colonel MacKenzie had been posted missing in Burma whereupon the Colonial Office at once passed it on to the India Office be,: luso he had been serving with an Indian Division. In the end his family had to give up their house and remain homeless for the rest of the war. We can argue that this is one of those cat's-cradles of red tape and disclaim responsibility: we cannot disclaim responsibility for the way we have let down thousands of Japanese prisoners of war, and it will be a tough conscience that is proof against this coldly objective book.