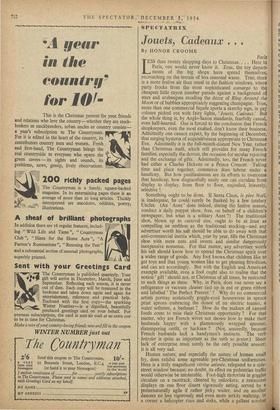 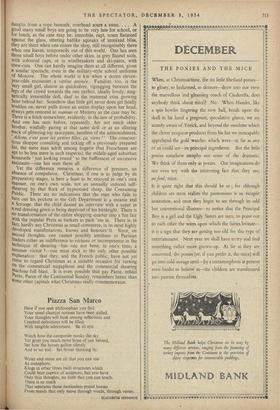 By HONOR CROOME Paris LESS than twenty shopping days to Christmas. . .. Here in Paris, one would never know it. .True, the toy depart- ments of the big shops have spread themselves, encroaching on the terrain of less seasonal wares. True, ther0 is a more festive air than usual in the fashion windows, where party frocks from the most sophisticated camargo to thq cheapest little rayon number parade against a background o stars and arabesques recalling the decor of Rtng Around the Moon or of bubbles appropriately suggesting champagne. True, more than one commercial fagade sports a sketchy sign, in gay colours picked out with fairy lights, ' Jouets, Cadeaux.' But the whole thing is, by Anglo-Saxon standards, fearfully casual, even half-hearted. One is forced to the conclusion that French shopkeepers, even the most exalted, don't know their business. Admittedly one cannot expect, by the beginning of December, that surging hysteria of acquisitiveness appropriate to Christmas Eve. Admittedly it is the full-month-distant New Year, rather than Christmas itself, which still provides for many French families, especially the devout, the occasion for secular rejoicing and the exchange of gifts. Admittedly, too, the French never had either a Charles Dickens or a Prince Consort. Taking time and place together, commerce does labour under a handicap. But how pusillanimous are its efforts to overcome that handicap, how disgracefully easily one can circulate from display to display, from floor to floor, unjostled, leisurely, selective ! Something ought to be done. If Santa Claus, le pere Noel, is inadequate, he could surely be flanked by a few tutelary Uncles. (An ' Aunt' does indeed, during the festive season, conduct a daily puppet show, free, on behalf of a children's newspaper; but what is a solitary Aunt ?) The traditional shoe, blown up to carnival size, ought to be at least as compelling an emblem as the traditional stocking—and any advertiser worth his salt should be able to do away with that anti-commercial inertia which, year by year, fills the Christmas shoe with mere nuts and sweets and similar dangerously inexpensive nonsense. For that matter, any advertiser worth his salt should know how to spread the Christmas spirit over a wider range of goods. Any fool knows_ that children like to get toys and that young women like to get pleasing frivolities, and can act accordingly. But with the English and American example available, even a fool ought also to realise that the notion ' gift' should not, at Christmas of all times, be restricted to such things as these. Why, in Paris, does one never see a refrigerator or vacuum cleaner tied up in red or green ribbon and labelled ' The Perfect Present' ? Why do no commercial artists portray ecstatically goggle-eyed housewives in spruce print aprons embracing the donor of an electric toaster, a water softener, a bathmat ? How do the makers of canned foods come to miss their Christmas opportunity ? For that matter, why are French wives not shown how to make their husbands happy with a glamorously wrapped spanner, distempering outfit, or hacksaw ? (Not, assuredly, because French husbands lack a handyman's instincts. The verb ' bricoler is quite as important as the verb to potter.) Sheer lack of enterprise must surely be the only possible answer; it is all very sad. Human nature, and especially the nature of human small fry, does exhibit some agreeable pre-Christmas uniformities. Here is a truly magnificent vitrine wthnee, relegated to a side- street window because, no doubt, its effect on pedestrian traffic would otherwise be intolerable. Foot-high motorists in goggles circulate on a racetrack, cheered by onlookers; a restaurant displays on one floor diners vigorously eating, served by a preternaturally agile if rather jerky waiter, and on another dancers no less vigorously and even more jerkily waltzing: in a corner a helicopter rises and sinks, while a gallant acrobat dangles from a rope beneath; overhead soars a swan. . . . A good many small boys are going to be very late for school, or for lunch, as the case may be; immobile, rapt, noses flattened against the glass, uttering batlike squeaks of unmixed bliss, they are there when one enters the shop, still recognisably there When one leaves, temporarily out of this world. One has seen those small boys before under other skies, in grey flannel suits, with coloured caps, or in windbreakers and ski-pants, with crew-cuts. One can hardly imagine them at all different, given a similar spectacle, even in the military-style school uniforms of Moscow. The whole world is kin when a dozen eleven- year-olds encounter a vitrine animee. Familiar, too, is the very small girl, elusive as quicksilver, zigzagging between the legs of the crowd towards the one perfect, ideally lovely, mag- netically irresistible doll, deaf to the maternal cries growing faint behind her. Somehow that little girl never does get fatally trodden on, 'never pulls down an entire display upon her head, always gets restored to Inman or Mummy as the case may be. There is a hitch somewhere, evidently, in the law of probability. And one has seen before, repeatedly, her not much older brother, wistfully gazing at that same doll or at an alluring stack of glittering toy saucepans, heedless of the admonishment, Allons, c'est pour les petites filles, ca, viens ! ' The conscien- tious shopper consulting and ticking off a previously prepared list, the mere man adrift among lingerie (but Frenchmen are apt to be less mere in such respects), the middle-aged suburban housewife ' just looking round ' to the bafflement of successive assistants—one has seen them all.

Yet the difference remains, a difference of pressure, an absence of compulsion. Christmas, if one is to judge by its preparatory stages, is here a feast to be enjoyed in one's own manner, on one's own scale, not an annually induced self- shearing by that flock of hypnotised sheep. the Consuming Public. There are no indications that the man who fails to turn out his pockets in the Gift Department is a meanie and a Scrooge, that the child denied an interview with a super in a red dressing gown is being deprived of his birthright. There is no transformation of the entire shopping quarter into a fun fair with the popular Press as barkers to pack 'em in. There is, in fact, hardly any Christmas as retail commerce, in its most highly developed manifestations, knows and honours' it. Since, on second thoughts, one cannot possibly attribute to Parisian traders either an indifference to reclame or incompetence in the technique of shearing—has one not been, in one's time, a summer visitor ?—one must stick to the only other possible explanation : that they, and the French public, have not yet come to regard Christmas as a suitable occasion for turning on the commercial megaphone and the commercial shearing machine full blast. It is even possible that gay Paree, infidel Parte, Paree of the Continental Sunday. remembers better than Rome other capitals what Christmas really commemorates.