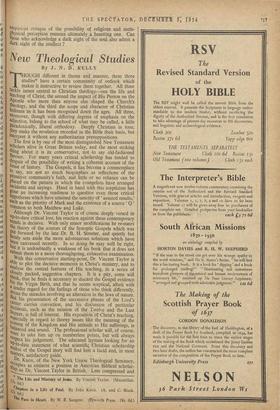 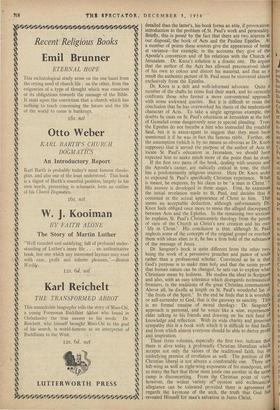 in theme and manner, these three studies* have a certain community of outlook which makes it instructive to review them together. All three tackle issues central to Christian theology—one the life and teaching of Christ, the second the impact of His Person on the Apostle who more than anyone else shaped the Church's theology, and the third the scope and character of Christian holiness as it has been recognised down the ages. All three, moreover, though with differing degrees of emphasis on the adjective, belong to the school of what may be called, a little Paradoxically, liberal orthodoxy. Deeply Christian in tone, they make the revelation recorded in the Bible their basis, but interpret it without any authoritarian presuppositions. The first is by one of the most distinguished. New Testament scholars alive in Great Britain today, and the most striking thing about it is its conservative, not to say old-fashioned flavour. For many years critical scholarship has tended to despair of the possibility of writing a coherent account of the Jesus of history. The Gospels, it has become a commonplace to say, are not so much biographies as reflections of the Primitive community's faith, and little or no reliance can be Placed on the pattern in which the evangelists have arranged incidents and sayings. Hand in hand with this scepticism has gone an increasing readiness to question even those critical hYpotheses which have attained the sanctity of ' assured results,' such as the priority of Mark and the existence of a source ' Q ' Common to both Matthew and Luke.

Although Dr. Vincent Taylor is of course deeply versed in 11P-to-date critical lore, his reaction against these contemporary trends is decisive. With only minor modifications he re-states the theory of the sources of the Synoptic Gospels which was Put forward by the late Dr. B. H. Streeter, and quietly but firmly sets aside the more adventurous solutions which have but canvassed recently. In so doing he may well be right, °lit it is undoubtedly a weakness of his book that it does not submit them to a more thoroughgoing, exhaustive examination. , With this conservative starting-point, Dr. Vincent Taylor is able to plot the decisive moments in Christ's ministry, and to analyse the central features of His teaching, in a series of 0sely packed, suggestive chapters. It is a pity, some will !Milk, that he finds it necessary to discard the Gospel evidence tot the Virgin Birth, and that he seems sceptical, albeit with a tender regard for the feelings of those who think differently, about the miracles involving an alteration in the laws of nature. ut his presentation of the successive phases of the Lord's Falter carries conviction, and his discussion of particular incidents, such as the mission of the Twelve and the Last .Supper, is full of interest. His exposition of Christ's teaching, especially in regard to thorny issues like the meaning of the 3tlining of the Kingdom and His attitude to His sufferings, is ,,,lanced and sound. The professional scholar will, of course, want to take him up on numberless points, but will always !,e-s Peet his judgement. The educated layman looking for an up-to-date statement of what scientific Christian scholarship makes of the Gospel story will find him a lucid and, in most Matters, satisfactory guide. Dr. Knox, of the New York Union Theological Seminary, t)c • eumeminent%Ils as eminent a position in American Biblical scholar- as Dr. Vincent Taylor in British. Less compressed and 1.,* The Life and Ministry of Jesus. By Vincent Taylor. (Macmillan. `8. 60

1,ters in a Life of Paul. By John Knox. (A. and C. Black. s. 6d.) detailed than the latter's, his book forms an able, if provocative, introduction to the problem of St. Paul's work and personality. Briefly, this is posed by the fact that there are two sources at our disposal, the book of Acts and the Pauline Epistles. At a number of points these sources give the appearance of being at variance-for example, in the accounts they give of the Apostle's conversion and of his relations with the Church at Jerusalem. Dr. Knox's solution is a drastic one. He argues that the author of the Acts has allowed preconceived ideas of his own to colour and distort his material, and that as a result the authentic picture of St. Paul must be recovered almost exclusively from the Epistles.

Dr. Knox is a deft and well-informed advocate. Quite a number of the shafts he trims find their mark, and he certainly confronts those who favour a more conventional approach with some awkward queries. But it is difficult to resist the conclusion that he has overworked his thesis of the tendentious character of Acts. To take a single egregious example, the doubts he casts on St. Paul's education at Jerusalem at the feet of Gamaliel come dangerously near to special pleading. True, the Epistles do not breathe a hint who instructed the youthful Saul, but it is extravagant to suggest that they must have mentioned it if he was in fact the famous rabbi. Further, on the assumption (which is by no means so..obvious as Dr. Knox supposes) that it served the purpose of the author of Acts to locate St. Paul's education in Jerusalem, we should have expected him to make much more of the point than he does. If the first two parts of the book, dealing with sources and the Apostle's career, are radically critical in tone, the third has a predominantly religious interest. Here Dr. Knox seeks to expound St. Paul's specifically Christian experience. What is meant, he enquires, by his claim to be ' a man in Christ' ? His answer is developed in three stages. First, he examines the initial revelation made to St. Paul, and decides that it consisted in the actual appearance of Christ to him. This seems an acceptable deduction, although unfortunately Dr. Knox feels obliged once more to stress the alleged discrepancy between Acts and the Epistles. In the remaining two sections he explains St. Paul's Christocentric theology from the points of view of the Church as Christ's new creation and his own ' life in Christ.' His conclusion is that, although St. Paul neglects some of the concepts of the original gospel or overlays them with ideas alien to it, he has a firm hold of the substance of the message of Jesus.

Dr. Sangster's book is quite different from the other two' being the work of a persuasive preacher and pastor of souls rather than a professional scholar. Convinced as he is that God's purpose is to make man holy and that the saints prove that human nature can be changed, he sets out to explore what Christians mean by holiness. He studies the ideal in Scripture and also, with an easy tolerance which disregards ecclesiastical frontiers, in the traditions of the great Christian communions. Above all, he dwells at length on St. Paul's wonderful list of ' the fruits of the Spirit.' In the end he finds that it is worship, or self-surrender to God, that is the gateway to sanctity. This is no formal treatise of moral theology : Dr. Sangster's approach is personal, and he writes' like a wise, experienced elder talking to his friends and drawing on his rich fund of knowledge and reflection. With its wide charity and generous sympathy this is a book with which it is difficult to find fault, and from which almost everyone should be able to derive profit and inspiration.

These three volumes, especially the first two, indicate that there is alive today a profoundly Christian liberalism which accepts not only the values of the traditional faith, but its underlying premiss of revelation as well. -The position of the Christian liberal is not always a comfortable one. There are left-wing as well as right-wing exponents of his standpoint, and to many the fact that these must jostle one another in the same camp is disconcerting. From the Christian point of view, however, the widest variety of* opinion and ecclesiastical allegiance can be tolerated provided there is agreement as regards, the keystone of the arch, the truth that God has revealed Himself for man's salvation in Jesus Christ.