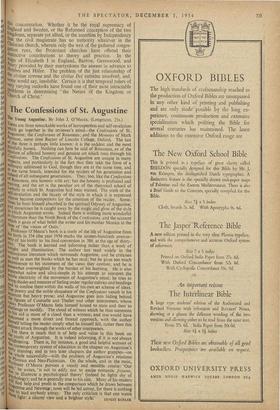 The Confessions of St. Augustine

lite Young Augustine. By John J. O'Meara. (Longmans. 21s.) 'NNE are three remarkable works of introspection and self-revelation which go together in the reviewer's mind—the Confessions of St. ,,gustinc; the Confessions of Rousseau; and the Memoirs of Mark r,,attison, some time Rector of Lincoln College, Oxford. The last el the three is perhaps little known: it is the saddest and the most Painfully honest. Nothing can here be said of Rousseau, or of the mixture of affected honesty and genuine art which runs through his ,.ewifessions. The Confessions of St. Augustine are unique in many '05DeCts, and particularly in the fact that they take the form of a Soliloquy addressed to God, though they are at the same time, and ;f1 the same breath, intended for the readers of his generation and Need of all subsequent generations. They, too, like the Confessions °t Rousseau, mix honesty with art; but the honesty is profound and 1110ving, and the art is the peculiar art of the rhetorical school of `-atinity in which St. Augustine had been trained. The truth of the sett-revelation and the beauty of the style in which it is expressed almost become competitors for the attention of the reader. Some- flies he finds himself absorbed in the spiritual Odyssdy of Augustine, and sometimes he is caught away by the magic and glow of the style 1.11 which Augustine wrote. Indeed there is nothing more wonderful to literature than the Ninth Book of the Confessions, and the account which it gives of what befell the writer and his mother Monica at the roue of 'the vision of Ostia.' , Professor O'Meara's book is a study of the life of Augustine from I. birth in 354 (the year 1954 marks the sixteen-hundreth anniver- of his birth) to his final conversion in 386, at the age of thirty- :kV°. The book is learned and informing rather than a work of :nsight and illumination. The author has read widely in the 'elurninous literature which surrounds Augustine, and he criticises ..as well as uses the books which he has read; but he gives too much Prominence to his statement of the views they contain, and he is somewhat overweighted by the burden of his learning. He is also 6etnewhat naïve and ultra-simple in his attempt to interpret the , fie electricity of the movement of Augustine's mind; he tries to bring shades and nuances of feeling under regular rubrics and headings .rr,l,f1 to confine them within the walls of his own set scheme of ideas. The Poetry and the noble eloquence of the Confessions vanish in his qticleurate but heavy prose; and Augustine goes into hiding behind v;c figures of Courcelle and Theiler and other interpreters, whose „'N's Professor O'Meara feels himself bound to state and then to i'tallenge or modify. The cloud of witness which he thus summons we his aid is more of a cloud than a witness; and one would have we a more direct and frontal approach, with the author fillself telling the reader simply what he himself felt, rather than this indirect attack through the works of other interpreters.

th Yet there is much that is of help and value in this book on tRe, Youth of Augustine. It is indeed informing, if it is not always till'ightening. There is, for instance, at good and helpful account of earlye Contemporary system of education in the chapter on Augustine's training; and in two later chapters the author grapples—on 1,,e whole successfully—with the problem of Augustine's relations i'lotinus and Neo-Platonism. On the whole, and in the main, aim' O'Meara pursues a steady and sensible course: 'Our Tlorn,' he writes, 'is not to edify, nor to excite romantic frissons, Dor to illustrate a psychological theory' (indeed he fights shy of w'iehology); and he is generally true to his aim. Many of his readers re light: a clearer view and a brighter style. ERNEST BARKER