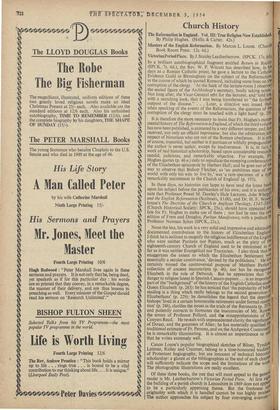 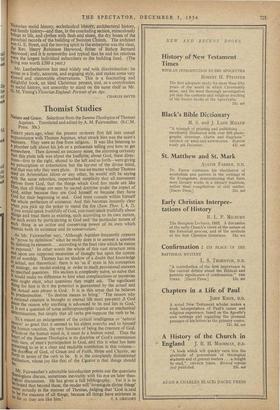 IN a brilliant autobiographical fragment entitled Return to fiealii! (SPCK, 7s. 6d.), the Rev. W. P. Witcutt has described how, in 1111 days as a Roman Catholic priest, he gave a lecture to the Ca holin Evidence Guild in Birmingham on the subject of the Reformation in the course of which he quoted Ronsard, including some lines on the corruption of the clergy. At the back of the lecture-room I observed the seated figure of the Archbishop's secretary, busily taking notes Not long after, the Vicar-General seht for the lecturer, and told mei with a searching look, that I was being transferred to "the farthest outpost of the diocese." . . . Later, a directive was issued that when speaking of the events of the Reformation, the question of the corruption of the clergy must be touched with a light hand' (p. 29) It is therefore the more necessary to insist that Fr. Hughes's mono' mental history of The Reformation in England, of which the third voluine has now been published, is animated by a very different temper, and hat received, not only an official imprimatur, but also the admiration all° respect of historians who are not of the Roman obedience. It is not• of course, impartial, but neither is it partisan or wilfully propagandist: the author is never unfair, except by inadvertence. It is, in fact, e work of real historical scholarship, based upon considerable research, candid, judicious, and remarkably objective. For example, fr. Hughes quotes (p. 46 n.) only to repudiate the sweeping condemna t of the Elizabethan episcopate by Herbert Hall; and he goes out of 10 way to observe that Bishop Fletcher, as 'an ambitious man of 114 world with only his wits to live by,' was 'a rare specimen of a type remarkably uncommon in the Church of England' (p. 193).

In these days, no historian can hope to have read the latest bool( upon his subject before the publication of his own; and it is unfortn,' nate that Professor Powel M. Dawley's Hale Lectures, John Whitgill and the English Reformation (Scribners, $3.00), and Dr. H. F. Wood' house's The Doctrine of the Church in Anglican Theology, 1547-160J (Church Historical Society: SPCK, 25s.), should have appeared too late for Fr. Hughes to make use of them ; nor had he seen the rien' edition of Frere and Douglas, Puritan Manifestoes, with a preface Professor Norman Sykes (SPCK,-21s.).

None the less, his work is a very solid and impressive and ado irabli documented contribution to the history of Elizabethan England. I think he is inclined to magnify the religious indifference of the English who were neither Puritans nor Papists, much as the piety of the eighteenth-century Church of England used to be minimised in so far as it was neither Evangelical nor Tractarian. I also think that Ill exaggerates the extent to which the Elizabethan Settlement wilt essentially a secular contrivance, 'devised by the politicians.' He Wet certainly missed the controversial purpose' of Matthew Pe rkell collection of ancient manuscripts (p. 46), nor has he recognise' Elizabeth in the role of Deborah. But he appreciates that `111° danger to religion latent in Spanish Cresaro-papism ... is an important part of the "background" of the history of the English Catholics unde Queen Elizabeth' (p. 243): he has noticed that the popularity of bible' reading is a thing which really belongs to the second generat on '4 Elizabethans' (p. 229): he demolishes the legend that the depriv,0 bishops lived in a certain honourable retirement under formal rest r1c tion' (p. 246), clarifies the issues in the trials of the Recusants (p and patiently corrects in footnotes the inaccuracies of Mr. 11 ovisei the errors of Professor Pollard, and the misapprehensions of Pr' Conyers Read. He reveals with unprecedented clarity the signil cal° of Douay, and the greatness of Allen; he has materially qualified it° traditional estimate of Fr. Persons, and on, the Archpriest Controve0 he is remarkably illuminating. It is almost an impertinence to add that he writes extremely well.

ndalh' Latimer, Ridley and Cranmer, belong to a time-honoured traditidll of Protestant hagiography, but are innocent of technical history"/ scholarship: a glance at the bibliographies at The end of each e] aPle will sufficiently indicate the scope and the limitations of the

The photographic illustrations are really excellent.

Of these three books, the one that will most appeal to the g reader is Mr. Leatherbarrow's Victorian Period Piece. At firs the building of a parish church in Lancashire in 1869 does not to be a particularly appetising theme. But the freshnes originality with which it is handled cannot be too highly pi The author approaches his subject by four converging aver

Ictorian social history, ecclesiastical history, architectural history, and family history—and then, in the concluding section, miraculously brings to life, and clothes with flesh and sinew, the dry bones of the Parochial records of the building of Swinton Church. The architect Was G. E. Street, and the moving spirit in the enterprise was the vicar, the Rev. Henry Robinson Heywood, father of' Bishop Bernard tal HeYwood; and it is noteworthy and typical that he and his relatives were the largest individual subscribers to the building fund. (The ief living was worth £200 a year.) Mr. Leatherbarrow has read widely and with discrimination: he Writes in a lively, accurate, and engaging style, and makes some very shrewd and memorable observations. This is a fascinating and delightful book, an ideal Christmas present, and, as a contribution to social history, not unworthy to stand on the same shelf as Mr. G. M. Young's Victorian England: Portrait of an Age.