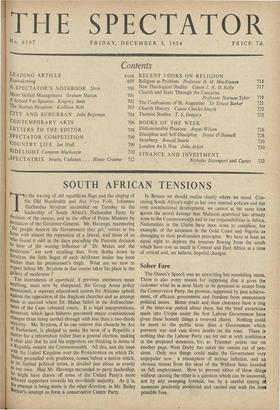 The Queen's Speech was an unexciting but nourishing menu. There is also every reason for supposing that it gives the customer what he is most likely to be prepared to accept from the Conservative Party, the promise, supported by past achieve- ment, of efficient government and freedom from unnecessary political issues. Better roads and slum clearance have a ring of the inter-war period about them, but the brief excursions made into Utopia under the first Labour Government have given these homely things a renewed charm. Nothing could be more to the public taste than a Government which prevents war and cuts down deaths on the road. There is nothing that the Labour Party can hit out at with confidence in the proposed measures, for, as Trimmer points out on another page, West Derby has taken the venom out of pen- sions. Only two things could make the Government very unpopular now a resumption of serious inflation, and an obvious retreat from the ideal of the Welfare State founded on full employment. How to prevent either of these things without causing the other is a question which can be answered, not by any sweeping formula, but by a careful timing oe measures prudently conceived and carried out with the least possible fuss.