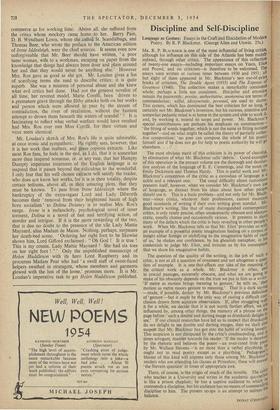 Language as Gesture: Essays in the Craffand Elucidation of Modern Poetry. By R. P. Blackmur. (George Allen and Unwin. 25s.)

MR. R. P. BLACKMUR is one of the most influential of living critics, although his influence on this side of the Atlantic has been mainlY indirect, through other critics. The appearance of this collection of twenty-one essays—including important essays on Yeats, Eliot and Pound, and on criticism—is therefore to be welcomed. The essays were written at various times between 1930 and 1951; all but eight of them appeared in Mr. Blackmur's two out-of-print books of criticism, The Double Agent (1935) and The Expense Of Greatness (1940). The collection makes a remarkably consistent whole; perhaps a little too consistent. Discipline and attention remain the passwords; precise, authoritative, anonymous are terms of commendation; wilful, idiosyncratic, personal, are used to damn. This system, which has dominated the best criticism for so long, is, certainly not Mr. Blackmur's invention, but his curious, attentive and somewhat pedantic mind is at home in the system and able to work it. and, by working it, extend its scope and power. Mr. Blackmur's special contributions are perhaps his emphasis on construction— 'the fitting of words together, which is not the same as fitting notions together'—and on what might be called the theory of partially collec- tive composition: `no poet can compose the whole of his poetry himself and if he does not go for help to poetic authority he will go elsewhere. . .

The most obvious merit of this criticism is its power of cleaning, by elimination of what Mr. Blackmur calls' debris.' Good examples of this operation in the present volume are the thorough and destruc- tive analysis of the language of E. E. Cummings, and the notes on Emily Dickinson and Thomas Hardy. This is useful work and Mr. Blackmur's conception of the critic as a custodian of language is 3 noble and a relevant one. The usual difficulty about custodians presents itself, however, when we consider Mr. Blackmur's own use of language, as distinct from his ideas about how other people should use it. This is a basic problem—and not only for Mr. Black• mur—since critics, whatever their professions, cannot maintain good standards of writing if their own writing gives scandal. Mr. Blackmur's writing, like that of many distinguished contemporary critics, is only rarely precise, often unnecessarily obscure and idiosyn' cratic, usually clumsy and occasionally vicious. It presents in short many of the defects which the critic is busy revealing in other peonle's work. When Mr. Blackmur tells us that Mr. Eliot 'provides us with an example of a powerful poetic imagination feeding on a corpus of insight either foreign or stultifying to the imaginative habit of most of us,' he shakes our confidence, by his ghoulish metaphor, in his credentials to judge Mr. Eliot, and irritates us by. his assumptio° that we share his imaginative habits.

The question of the quality of the writing, in the job of such 3 critic, is not at all a question of ornament and not altogether a ques; tion of example. It is one that affects our idea of the meaning the critical work as a whole. Mr. Blackmur is often, and in crucial passages, extremely obscure, and what we are going 10 make of his obscurity depends on the trust we put in him as a writer. 'If metre as motion brings meaning to gesture,' he tells us, 'then motion as metre moors gesture to meaning.' That is a dark saying —made, if possible, darker by Mr. Blackmur's previous definition of gesture'—but it might be the only way of stating a difficult con' elusion drawn from accurate observation. lf, after struggling with it for a while, we decide that it is not worth further effort, we are influenced by, among other things, the memory of a phrase on the page before: 'such a double and darting image as drunkards delight t° see.' If our clinical researches have led us to suspect that drunkards do not delight to 'see double and darting images, then we shall also suspeot that Mr. Blackmur has got into the habit of writing loosely' i This suspicion is not dissipated by the critic's condescending, and at times arrogant, manner towards his reader: If the reader is deceived by the rhetoric and believes the poem'—an over-rated little pig by Mr. Wallace Stevens—'is no more than a verbal plaything, 11 ought not to read poetry except as a plaything.' Pedagogue', bluster of this kind will impress only those among Mr. Blackmur readers who are attending his classes at Princeton; these will answe' 'the Stevens question' in tones of appropriate awe. There, of course, is the origin of much of the trouble. The critic who teaches in a University and writes in the academic quartert, is like a prison chaplain; he has a captive audience to which '1„" commends a discipline, but his audience has no means of commending discipline to him. The present review is an attempt to redress the balance.