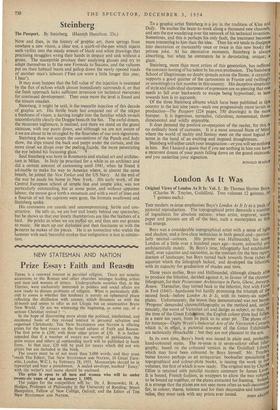 The Passport. By Steinberg. (Hamish Hamilton. 25s.) Now and then, in the history of graphic art, there springs from nowhere a new vision, a clear eye, a quirk-of-the-pen which injects such virility into the steady stream of black and white drawings that practising strugglers wring their hands in despair and sink without a groan. The susceptible produce their analysing glasses and try to adapt themselves to fit the new Formula to Success, and the vultures put on their hobnail boots and gallop down the newly opened roads of another man's labours (`Feet are worn a little longer this year, I hear').

It may even happen that the full value of the injection is swamped by the flux of echoes which almost immediately surrounds it, or that the fresh approach lacks sufficient invention (or technical resources) for continued development. Then once more the level is found and the stream steadies.

Steinberg, it might be said, is the mescalin injection of this decade of graphic art. His fertile brain has conjured out of the inkpot a freshness of vision, a darting insight into the familiar which reveals uncomfortably clearly the Doggie beneath the Sin. The awful dream, the recurrent nightmare, is realised, and there we stand on the grand staircase, with our pants down, and although we are not aware of it we are about to be strangled by the flourishes of our own signatures.

Steinberg does not accept the conventions of the Punch and Judy show, the slips round the back and peeps under the curtain, and the more tinsel we drape over the peeling facade, the more penetrating the eye behind his focussing glass. I

Saul Steinberg was born in Roumania and studied art and architec- ture in Milan. In Italy he practised for a while as an architect and did a certain amount of cartooning until 1941, when he found it advisable to make his way to America where, in almost the same breath, he joined the New Yorker and the US Navy. At the end of the war he .made his home in New York. His early work, of the Central European school of simple line and simple joke, was not particularly outstanding, but at some point, and without apparent labour, the mouse gave forth a mountain and with a swirl of lines and a flourish of wit the captions were gone, the formula swallowed and Steinberg spoke.

His comments are caustic and uncompromising, fertile and con- structive. He tells us, we are lost and lonely behind our spectacles; but he shows us that our lonely thumbprints are like the feathers of a bird. He pricks us when we are puffed up, and then sets our groans to music. He tears up our diplomas and then fascinates us with the Ntterns he makes of the pieces. He is an iconoclast who wields the hammer with such beautiful strokes that indignation is lost in admira- tion. To a graphic artist Steinberg is a joy in the tradition of Klee and Dufy. He excites the brain to work along a thousand new channels, and sets the eye wandering over the network of his technical invention. Sometimes, and this is perhaps his only fault, the treatment becomes more interesting to him than the idea. Then his wit tends to dissipate into decoration or (noticeably once or twice in this new book) the private joke. At his decorative moments, Steinberg is always absorbing, but when he comments he is devastating, unique; a giant. Steinberg, more than most artists of this generation, has suffered the constant looting of his talent by his own profession. The Steinberg School of Illegitimates no doubt spreads across the States; it certainlY supports a good quarter of the cartoonists in France and (willinglY or unwittingly) a fair number in this country. His deceptive simplicity of style and individual sharpness of expression are so piercing that one needs to fall over backwards to escape being hypnotised; to lean towards him is to succumb.

Of the three Steinberg albums which have been published in this country in the last nine years each one progressively more lavish in production—The Passport (224 pages, 350 drawings) is the most bumper. It is ingenious, surrealist, ridiculous, nonsensical, three- dimensional and wildly enjoyable. It does 5temand the positive co-operation of the reader, for this 15 no ordinary book of cartoons. It is a most unusual State of Mind where the world of reality and fantasy meet on the most logical of terms in the hand of an exciting and inspired draughtsman. Steinberg will either catch your imagination—or you will see nothing in him. But I hazard a guess that if you see nothing in him you have a recurrent dream of your pants falling down on the grand staircase, and you underline your signature.