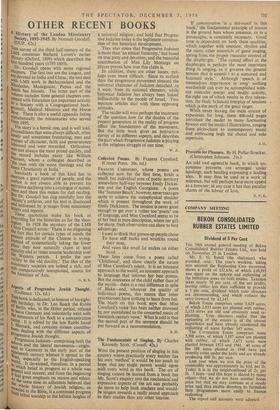 Tills book is dedicated, in honour of his eight- 'v,,th

PBerlin who, in the Hitler period, refused .,' leave Germany and voluntarily went with the remnants of his flock to a concentration 11). It is edited by the late Israel attuck, and contains sixteens contribu- :ons dealing with the different aspects of progressive Jewish thought. Progressive Judaism—comprising both the at„,1°Fm and the liberal movements—origin- in Germany in the early part of the woJteteenth century whence it spread to the Zest, especially to the English-speaking nt, especially It developed, therefore, in a period >n which belief in progress as a whole was r_eral and sincere; and from the beginning „, great emphasis on reason and ethics. iZt the same time its adherents believed that Lie whole history of Jewish religion, as

a universal religion; and hold that Progres- sive Judaism today is the legitimate continua- tion of this historical development.

They also stress that Progressive Judaism is more than 'an ethical fraternity,' but based on true piety and devotion; and the beautiful contribution of Miss Lily Montagu on prayer proves how true this claim is.

In addition, there are other issues, per- haps even more difficult. Since its earliest days the progressive movement stressed the universal character of Judaism detached, as it were, from its national elements, while historical Judaism has always been linked indissolubly to the people of Israel. Two separate articles deal with these opposing attitudes.

The reader will miss perhaps the treatment of the question how far the doubts of the present generation in the reality of progress affect the foundations of the movement. But the little book gives an instructive survey of its different aspects, and describes the part which Progressive Judaism is playing in the religious struggle of our time.