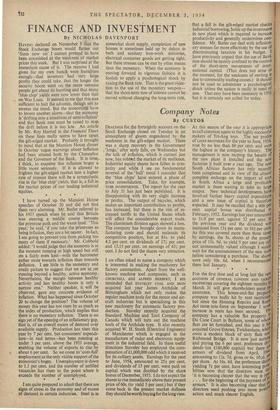 DEALINGS for the fortnightly account on the Stock Exchange closed on Tuesday in an atmosphere of gloom engendered by the weakness in the gilt-edged market. There was a sharp recovery in the Government 'longs,' after early falls, on Wednesday but the talk of inflation, which is current just now, has robbed the market of its resilience. Industrial equity shares have fallen in sym- pathy and while I see no fundamental reversal of the. 'bull' trend I consider that the blue chips' have entered a phase of price consolidation. Take, for example, TUBE INVESTMENTS. The report for the year to July 31 has just been published. It is disappointing with its very slight increase in profits. The output of bicycles, ,which makes an important contribution to profits, has increased, but there is the risk of in- creased tariffs in the United States which will affect the considerable export trade. The aluminium division again showed a loss. The company has brought down its manu- facturing costs and should maintain its competitive position, but at 81s. to yield 4.2 per cent. on dividends of 17i per cent. and 15.15 per cent. on earnings of 631 per cent. I do not find the shares very attractive.

I AM often asked to name a company which is interested in making the machinery for factory automation. Apart from the well- known machine tool companies, such as CHURCHILL and ALFRED HERBERT, I am reminded that STAVELEY COAL AND IRON acquired last year James Archdale of Birmingham which not only makes the regular machine tools for the motor and air- craft industries but is specialising in this new machinery for automatic factory pro- duction. Staveley recently acquired the Standard Machine and Tool Company of Canada which will turn out the machine tools of the Archdale type. It also recently acquired W. H. Smith (Electrical Engineers) of Manchester which is engaged in the manufacture of radar and electronic equip- merit in the industrial field. In these useful directions Staveley has employed the com- pensation of £1,000,000 odd which it received for its colliery assets. Earnings for the year to June, 1954, amounted to 251 per cent. and dividends of 15 per cent. were paid on capital which was .doubled by the share bonus of December, 1953. I do not expect the shares to rise immediately above their present price of 60s. (to yield 5 per cent.) but if they come back in the present market dullness they should be worth buying for the long view. Ar this season of the year it is appropriate to call attention again to the highly successful makers of Tri-Ang toys. The net profits of LINES BROTHERS for the year to June, 1954. rose by no less than 60 per cent. and were the highest in the company's history. Ths, management is now reaping the benefit 01 the new plant it installed and the new factories it built-over a year ago. The new South African factory has only recentlY been completed and in view of the almost complete embargo on the import of toYs in South Africa a large and profitable market is there waiting to take its largo output. New technical developments have involved further heavy capital expenditure and a new issue of capital is therefore expected. It may be recalled that a 400 per cent. capital bonus was distributed it; February, 1952. Earnings last year amounted to 51.0 per cent. against 32 per cent. in the previous year and the dividend \+'a' increased from 13i per cent. to 161 per cent. As this was covered more than three time' by earnings, the 5s. shares at the present price of 15s. 9d. to yield 5 per cent are still, not unreasonably valued although I would wait for the announcement of the new issd° before considering a. purchase. The shares, were only 10s. 6d. when 1 recommendo them last January.

FOR the first time and at long last the nc4 accounts of GENERAL LONDON AND URFAr4 PROPERTIES covering the eighteen months td March 31 will give shareholders some re', assurance. This house-and-flat propel company was badly hit by rent restricti00 but since the Housing Repairs and Read Act came into force on September 1 son4 increase in rents has been secured. 111.,,/ company has a valuable flat property t" Du Cane Court in Balham, some of whos° flats are let furnished, and this year it list" acquired Grove Estates, Twickenham, whic,11 owns a modem block of sixty flats ne`y, Richmond Bridge. It is now just earnill and paying the 6 per cent. preference divr dends (on £180,000 capital) but there drd, arrears of dividend from April, 19 amounting to 12s. 7d. gross or 6s. 103d. d,; per share. At 16s. 6d. the preference shilirt, yielding 71 per cent. have interesting p0550 bilities now that the directors state tl,i 'it is becoming clearer that the way is orfg . . . for.the beginning of the payment of thPg arrears.' It is also becoming clear that t."0 directors need pushing into more posit' action and much clearer English.