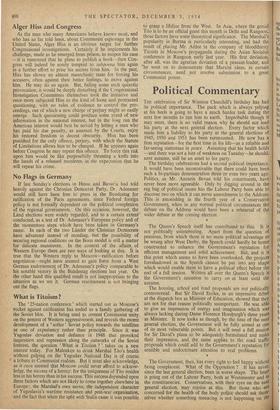 As the man who many Americans believe knows most, and who has so far told least, about Communist espionage in the United States, Alger Hiss is an obvious target for further Congressional investigations. Certainly if he implements his challenge, made as he emerged from prison, to reopen his case —it is rumoured that he plans to publish a book -then Con- gress will indeed be sorely tempted to subpoena him again in a further effort to prise his secrets from him. In the past, Hiss has shown an almost masochistic taste for forcing his accusers, often against their better feelings, to move against him. He may do so again. But, failing some such quixotic provocation, it would be,deeply disturbing if the Congressional Investigation Committees themselves took the initiative and once more subjected Hiss to the kind of loose and protracted questioning, with no rules of evidence to control the pro ceedings, out of which a new charge of 'perjury might so easily emerge. Such questioning could produce some shred of new information in the national interest, but in the long run the American interest would best be served by letting a man who has paid his due penalty, as assessed by the Courts, enjoy his restored freedom in decent obscurity. Hiss has been punished for the only offence, perjury, with which the Statute of Limitations allows him to be charged. If he appears again before Congress he may repeat this offence. To force this risk upon him would be like purposefully thrusting a knife into the hands of a released murderer, in the expectation that he will repeat his crime.