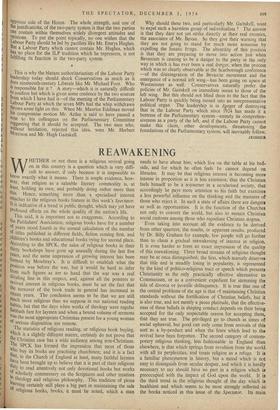 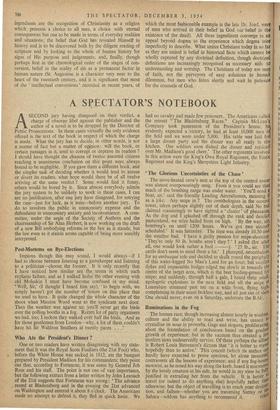 HETHER or not there is a religious revival going on in this country is a question which is very diffi- cult to answer, if only because it is impossible to, know exactly what it means. There is ample evidence, how- ever, that religion as a saleable literary commodity is, at least, holding its own, and probably doing rather more than this. Hence, something more than a specialised interest attaches to the religious books feature in this week's Spectator. It is indicative of a trend in public thought, which may yet have Profound effects on the whole quality of the nation's life. This said, it is important not to exaggerate. According to the Publishers' Association, religious books have for a number Of years stood fourth in the annual calculation of the number of titles published in different fields, fiction coming first, and children's books and educational books vying for second place. According to the SPCK, the sales of religious books in their thirty bookshops have gone up annually during the last five Years, and the same impression of growing interest has been formed by Mowbray's. It is difficult to establish what the Position was before the war, but it would be hard to. infer frorn such figures as are to hand that the war was a real dividing line in this respect, and, against all the pointers to revived interest in religious books, must be set the fact that the turnover of the book trade in general has increased in recent years. The conclusion seems to be that we are still much more religious than we suppose in our national reading habits, but that the days when works of theology were regular Sabbath fare for laymen and when a bound volume of sermons Was the most appropriate Christmas present for a young woman of serious disposition are remote. The statistics of religious reading, or religious book buying, Which is a slightly different matter, certainly do not prove that the Christian case has a wide audience among non-Christians. The SPCK has formed the impression that most of those Who buy its books are practising churchmen; and it is a fact that, in the Church of England at least, many faithful laymen have been brought up to believe that it is part of their religious duty to read attentively not only devotional books but works of scholarly commentary on the Scriptures and other treatises in theology and religious philosophy. This tradition of pious learning certainly still plays a big part in maintaining the sale Of religious books, books, it must be noted, which a man needs to have about him, which live on the table at his bed- side, and for which he often feels he cannot depend on libraries. It may be that religious interest is becoming more intense in proportion as it is less extensive; 'that the Christian feels himself to be a sojourner in a secularised society, that accordingly he pays more attention to his faith but exercises a less powerful influence on the thinking and the manners of those who reject it. In such a state of affairs there are dangers as well as opportunities. It is the function of the Churches not only to convert the world, but also to sustain Christian social customs among those who repudiate Christian dogma.

Even taking into account all the evidence to be derived from other quarters, the results, or apparent results, produced by Dr. Billy Graham for example, few people will go further than to claim a gradual reawakening of interest in religion. It is even harder to form an exact impression of the quality of this reawakening. Three broad streams of religious thought may be at once distinguished; the first, which scarcely deserves that title and is steadily losing in popularity, is represented by the kind of politico-religious tract or speech which presents Christianity as the only practically effective alternative to Communism, or as a convenient expedient for stemming the tide of divorce or juvenile delinquency. It is true that one of the central problems of the age is that of maintaining Christian standards without the fortification of Christian beliefs, but it is also true, and not merely a pious platitude, that the effective- ness of these beliefs in shaping conduct depends on their being accepted for the only respectable reason for accepting them, that they are true. The privileged go to church in times of social upheaval, but good can only come from revivals of this sort as a by-product and when the fears which lead to the revival have been forgotten. The second category of contem- porary religious thinking, less fashionable in England than elsewhere, is that which springs from revulsion from the world with all its perplexities, and treats religion as a refuge. It is a familiar phenomenon in history, but a mood which is not easy to distinguish from secular despair, and which it is hardly necessary to say should have no part in a religion which is preoccupied with the impact of God upon the world. It is the third trend in the religious thought of the day which is healthiest and which seems to be most strongly reflected in, the books noticed in this issue of the Spectator. Its main ingredients are the recognition of Christianity as a religion which presents a choice to all men, a choice with eternal consequences but one to be made in terms of everyday realities and situations; the belief that God has revealed Hiinself in history and is to be discovered both by the diligent reading of scripture and by looking to the whole of human history for signs of His purpose and judgements; and, finally, though perhaps first in the chronological order of the stages of con- version, belief in the reality of sin as a permanent factor in human nature (St. Augustine is a character very near to the heart of the twentieth century, and it is significant that most of the intellectual conversions' recorded in recent years. of which the most fashionable example is the late Dr. Joad, werl of men who arrived at their belief In God via belief in th4 existence of the devil). All these ingredients converge in ail appeal beyond dogma to the experience which dogma triet imperfectly to describe. What unites Christians today in so far as they are united is belief in historical facts which cannot be wholly captured by any doctrinal definition, though doctrinal definitions are increasingly recognised as necessary aids understanding and worship. The Christians of today are met) of faith, not the purveyors of easy solutions to humatt dilemmas, but men who listen alertly and wait in paticncd for the counsels of God.