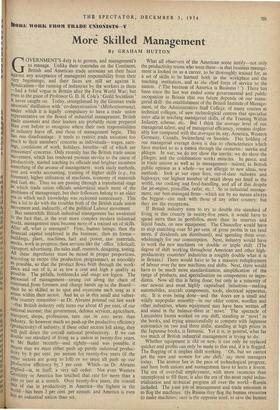 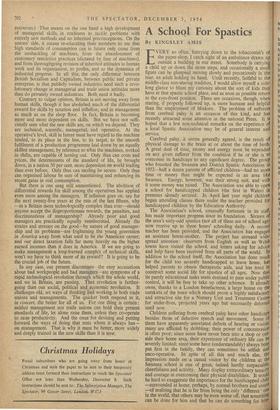 By GRAHAM HUTTON GOVERNMENT'S duty is to govern, and management's to manage. Unlike their comrades on the Continent, British and American trade unionists set their faces against any acceptance of managerial responsibility from their very beginnings; and their faces are still set against it. Syndicalism—the running of industries by the workers in them --had a brief vogue in Britain after the First World War; but even in the guise of Professor G. D. H. Cole's ' Guild Socialism' it never caught on. Today, strengthened by the German trade unionists' disillusion with ' co-determination' (Mitbestimtnung), tinder which it is legally compulsory to have a trade union representative on the Board of industrial management, British trade unionists and their leaders are probably more prepared than ever before to recognise where their own responsibilities in industry leave off, and those of management begin. This has one disadvantage : it tends to restrict trade unionists too Much to their members' concerns as individuals—wages, earn- ings, conditions of work, holidays, benefits—all of which are consumers' concerns. Only recently has the British trade union Movement, which has rendered yeoman service to the cause of Productivity, started teaching its officials and brighter members something of the arcana of management : work study methods, cost and works accounting, training of higher skills (e.g., for foremen), higher utilisation of machines, economy of materials and fuel, etc. Thus we are passing through a transitional stage in which trade union officials understand much more of the Problems of management, but their followers belong to an older era in which such knowledge was reckoned unnecessary. This has a lot to do with the troubles both of the British trade union Movement and, indirectly, of the political Labour movement. But meanwhile British industrial management has awakened to the fact that, in the ever more complex modern industrial World, management must become more of a trained set of skills. After all, what is managed? First, human beings; then the financial capital employed in the business; then its forms— buildings, plant, machines, fuel and power, raw materials, stocks, work in progress; then services like the ' office ' (clerical), transport, advertising, the sales staff, research, designing, testing. All these ingredients must be mixed in proper proportions, according to recipe (the production programme), as smoothly as possible, so that the product flows both through the work- Place and out of it, at as low a cost and high a quality as Possible. The pitfalls, bottlenecks and snags are legion. The Personnel of management—strung out along the chain of Command from foremen and charge hands up to the Board— must be so skilled as to spot and overcome each snag as it arises within their sector. And let us in this small and vulner- able country remember—as Dr. Abrams pointed out last week that British industry only turns out about 45 per cent. of our national income; that government, defence services, agriculture, transport, shops, professions, turn out in toto more than industry. So however much we push up the productive efficiency (Productivity) of industry, if these other sectors loll along, they W, ill pull down the overall national productivity. If -we can double our standard of living as a nation in twenty-five years, as Mr. Butler recently--and rightly—said was possible, it Means that we must either push up purely industrial produc- tivity by 6 per cent. per annum for twenty-five years (if the other sectors are going to loll) or we must all push up our Productive efficiency by. 3 per cent. Which—as Dr. Abrams implied—is, in itself, a very tall order. Not even Western Germany or America has touched that rate for more than a Year or two at a stretch. Over twenty-five years, the overall rate of rise in productivity in America—the highest in the World—has been 3 per cent. per annum; and America is even less an industrial nation than we. . What all observers of the American scene testify—not only the productivity teams who went there—is that business manage- ment is looked on as a career, to be thoroughly trained for, as a set of skills to be learned both in the workplace and the teaching institution, and as the chief form of service to the nation. (` The business of America is Business ! ') There has been since the last war ended some governmental and public recognition in Britain that our future depends on our mana- gerial skill : the establishment of the British Institute of Manage- ment, of the Administrative Staff College, of many courses at technical colleges, of new technological centres that specialise inter alia in teaching managerial skills, of the Training Within Industry scheme, etc. But I think the average level of our managerial talent, and of managerial efficiency, remains deplor- ably low compared with the averages in, say, America, Western Germany, Canada, Switzerland or Sweden. This holding of our managerial average down is due to characteristics which have marked us as a nation through the centuries : inertia and phlegm. In war, we, do not show the inertia; we do show the phlegm; and the combination works miracles. In peace, and in trade unions as well as in management—indeed, in British public opinion as a whole—we are allergic to new ideas, new methods : look at our open fires, out-of-date railways and highways, our highest number of retail shops per head in the world, our cooking and food-handling, and all of this despite the jet-engine, penicillin, radar, etc.! So in industrial manage- ment, our best-managed firms—which are by no means always the biggest—can rank with those of any other country; but they are the exceptions.

If British industry were to try to double the standard of living in this country in twenty-five years, it would have to spend more than its portfolios, more than its reserves and liquid funds, on new equipment. The Chancellor would have to stop snatching over 50 per cent. of gross profits in tax (and more, if dividends are distributed), and spending them over- whelmingly for our consumption. Next, industry would have to work the new machines on double or triple shift. (The degree of shift working throughout American and other high- productivity countries' industries is roughly double what it is in Britain.) There would have to be a massive redeployment of labour over the new machines and shifts. Next, there would have to be much more standardisation, simplification of the range of products, and specialisation on components or ingre- dients. Now all this is being done; but only in a minority of our newest and most highly capitalised industries—making automobiles, aircraft components, tools, electrical apparatus, etc. It is even being done—and the doers are a small and wildly unpopular minority—in our older cotton, woollen and other industries, where equipment may have been written off and stand in the balance-sheet at nowt.' The spectacle of Lancashire looms worked on one shift, standing at nowt' in the books, and trying unsuccessfully to compete with Japanese automatics on two and three shifts, standing at high prices in the Japanese books, is fantastic. Yet it is, in general, what far too much of British industrial management is trying to do..

Whether equipment is old or new, it can only be replaced quicker and profits can only be made to that end, if it is flogged. The flogging of it implies shift working. ' Oh, but we cannot get the men and women for one shift,' say most managers today. The answer lies in the pace of technological progress; and here both unions and management have to learn a lesson.

The era of over-full employment, with more vacancies than unemployed to fill them, is also the era of the most rapid indus- trialisation and technical progress all over the world—Russia included. The joint job of management and trade unionism is to flog the machines. (En Russia they flog the human resources to make machines; ours is the opposite need, to save the human resources.) That means on the one hand a high development of managerial skills, in readiness to tackle problems with entirely new methods and no inherited preconceptions. On the unions' side, it means re-educating their members to see that high standards of consumption can in future only come from the unshackling of machines, from the abandonment of customary restrictive practices (dictated by fear of machines), and from thoroughgoing revision of inherited attitudes to human work and its organisation, to profits, and to the dynamics of industrial progress. In all this, the only difference between British Socialism and Capitalism, between public and private enterprise, is that publicly owned industries need such a revo- lutionary change in managerial and trade union attitudes more than do privately owned industries. Both need it badly. Contrary to vulgar opinion, Britain is not moving away from human skills, though it has abolished much of the differential reward for skills by taxation and inflation; and in management as much as on the shop floor. In fact, Britain is becoming more and more dependent on skills. But we have not suffi- ciently seen what the new skills are, on which we depend. They are technical, scientific, managerial, and operative. At the operative's level, skill in future must have regard to the machine tended, to its place in the line, to its target, to the smooth fulfilment of a production programme laid down by an equally skilled management, by reference to what the machines, worked in shifts, are capable of turning out. Only thus can costs and prices, the determinants of the standard of life, be brought down, in a nation 50 per cent. more dependent on world trading than ever before. Only thus can sterling be secure. Only thus can organised labour be sure of maintaining and enhancing its recent gains in real consumption. But there is one snag still unmentioned. The abolition of differential rewards for skill among the operatives has applied even more among the managers. If inflation goes on, say for the next twenty-five years at the rate of the last fifteen, why —in a Britain more technologically complex than ever—should anyone accept the disproportionate rewards, the penalties, and discriminations of managership? Already poor and good managers arc practically equally remtinerated. Already the strains and stresses on the good—by nature of good manager- ship and its problems—are frightening the young generation in America away from what used to be the American career; and our direct taxation falls far more heavily on the higher earned incomes than it does in America. If we are going to make management a long-learned complex of technical skills, won't we have to think more of its reward'? It is going to be the crucial job of the future. . In any case, our present discontents—the easy accusations about bad workpeople and bad managers—are symptoms of a rapid technological revolution through which the whole world, and we in Britain, are passing. That revolution is farther- going than our social, political and economic revolution. It challenges old, set ways of thinking and working.in both trade unions and managements. The quicker both respond to it, in concert, the better for all of us. For one thing is certain: neither management nor trade unions can hold their present standards of life, let alone raise them, unless they co-operate to raise productivity. And the onus for devising and putting forward the ways of doing that rests where it always has— on management. That is why it must be better, more widely and deeply trained in the new skills than it is now.