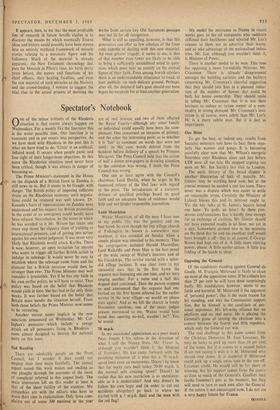 In my occasional appearances as a poor man's Peter Simple I fire salvos in the direction of what I call the Nanny State. Mr. Fraser is, although you wouldn't think it, the Minister of Transport. He has come forward with the perishing nonsense of a plan for a 70 m.p.h. speed limit even on motorways. Doesn't he know that for many cars built today 70-80 m.p.h. is the normal safe cruising speed? Doesn't he realise that his new restriction is as unenforce- able as it is undesirable? And why doesn't he follow his own logic and (in order to cut out accidents altogether) go back to where we started with a 5 m.p.h. limit and the man with the red flag?

My medal for resistance to Nanny in recent weeks goes to the oil companies who suddenly stiffened their backbones and rejected Mr. Lee's request to them not to advertise their wares, and so take advantage of the nationalised indus- tries. Mr. Lee, although you wouldn't think it, is Minister of Power.

There is another medal to be won. This time for opposing a more formidable Minister, Mr. Crossman. There is already disagreement amongst the building societies and the builders concerning Mr. Crossman's cheerful suggestion that they should join him in a planned reduc- tion of the number of houses that could be built for home ownership. They should unite in telling Mr. Crossman that it is not their business to reduce or ration output of a com- modity in strong demand. Mr. Crossman's invi- tation is, of course, more subtle than Mr. Lee's. He is a more subtle man. But it is just as impertinent.