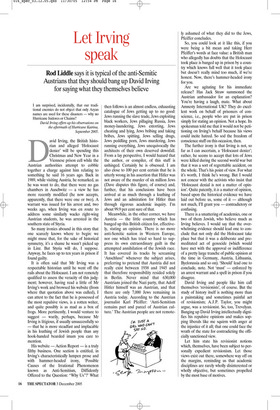 I am surprised, incidentally, that our traditional enemies do not object that only Aryan names are used for these disasters — why no Hurricane Isidores or Chaims?

David Irving offers up his observations on the aftermath of Hurricane Katrina,

David Irving, the British historian and alleged ‘Holocaust denier’ will be spending this Christmas and New Year in a Viennese prison cell while the Austrian authorities attempt to cobble together a charge against him relating to something he said 16 years ago. Back in 1989, while visiting Austria, he remarked, as he was wont to do, that there were no gas chambers in Auschwitz — a view he has more recently modified (he now accepts, apparently, that there were one or two). A warrant was issued for his arrest and, two weeks ago, when Irving was en route to address some similarly wacko right-wing Austrian students, he was arrested in the southern state of Styria.

So many ironies abound in this story that one scarcely knows where to begin: we might muse that, for the sake of historical symmetry, it’s a shame he wasn’t picked up in Linz. But Styria will do, I suppose. Anyway, he faces up to ten years in prison if found guilty.

It is often said that Mr Irving was a respectable historian until he went off the rails about the Holocaust. I am not remotely qualified to assess the veracity of this judgment; however, having read a little of Mr Irving’s work and browsed his website (from where that quotation above was culled), I can attest to the fact that he is possessed of the most repulsive views, is a rotten writer, and quite possibly is as mad as a box of frogs. More pertinently, I would venture to suggest — warily, perhaps, because Mr Irving is litigious, if usually unsuccessfully so — that he is more steadfast and implacable in his loathing of Jewish people than any hook-handed bearded imam you care to mention.

His website — Action Report — is a truly filthy business. One section is entitled, in Irving’s characteristically lumpen prose and with hammer-headed irony, ‘Possible Causes of the Irrational Phenomenon known as Anti-Semitism, Diffidently Offered to the Question: “Why Us”?’ What then follows is an almost endless, exhausting catalogue of Jews getting up to no good: Jews running the slave trade, Jews exploiting black workers, Jews pillaging Russia, Jews money-laundering, Jews extorting, Jews cheating and lying, Jews bribing and taking bribes, Jews spitting, Jews selling drugs, Jews peddling porn, Jews murdering, Jews running everything, Jews unequivocally the architects of their own deserved downfall. From a lay perspective, I would hazard that the author, or compiler, of this stuff is unhinged. Certainly he is obsessed. I am also close to 100 per cent certain that he is utterly wrong in his assertion that Hitler was not aware of the murder of six million Jews (Dave disputes this figure, of course) and, further, that his conclusions have been arrived at as much through a loathing of Jews and an admiration for Hitler than through rigorous academic inquiry. I’m about 99.9 per cent sure of that.

Meanwhile, in the other corner, we have Austria — the little country which has banged up this British citizen for, effectively, stating an opinion. There is no more anti-Semitic nation in Western Europe, nor one which has tried so hard to suppress its own extraordinary guilt in the attempted annihilation of the Jewish race. It has covered its tracks by screaming ‘Anschluss!’ whenever the subject arises, preferring to pretend that Austria did not really exist between 1938 and 1945 and that therefore responsibility resided solely in Berlin. Never mind that 630,000 Austrians joined the Nazi party, that Adolf Hitler himself was an Austrian, and that there are only 7,000 Jews remaining in Austria today. According to the Austrian journalist Karl Pfeiffer: ‘Anti-Semitism remains part and parcel of Austrian culture.’ The Austrian people are not remote ly ashamed of what they did to the Jews, Pfeiffer concludes.

So, you could look at it like this, if you were being a bit mean and taking Herr Pfeiffer’s words at face value: a British man who allegedly has doubts that the Holocaust took place is banged up in prison by a country which knows full well that it took place but doesn’t really mind too much, if we’re honest. Now, there’s hammer-headed irony for you.

Are we agitating for his immediate release? Has Jack Straw summoned the Austrian ambassador for an explanation? You’re having a laugh, mate. What about Amnesty International UK? They do excellent work on behalf of prisoners of conscience, i.e., people who are put in prison simply for stating an opinion. Not a hope. Its spokesman told me that it would not be petitioning on Irving’s behalf because his views could incite hatred. So sod the freedom of conscience stuff on this occasion, then.

The further irony is that Irving is not, so far as I can ascertain, a ‘Holocaust denier’; rather, he seems to accept that lots of Jews were killed during the second world war but that it was a sort of regrettable accident, on the whole. That’s his point of view. For what it’s worth, I think he’s wrong. But I would not concur with the activists who insist that ‘Holocaust denial is not a matter of opinion’. Quite patently, it is a matter of opinion, based upon the historical evidence we have laid out before us, some of it — although not much, I’ll grant you — contradictory or confusing.

There is a smattering of academics, one or two of them Jewish, who believe much as Irving believes. I would say that the overwhelming evidence should lead one to conclude that not only did the Holocaust take place but that it was a deliberate and premeditated act of genocide (which would have met with the approval or indifference of a pretty large tranche of public opinion at the time in Germany, Austria, Lithuania, Byelorussia and so on). ‘Should’ lead one to conclude, note. Not ‘must’ — enforced by an arrest warrant and a spell in prison if you disagree.

David Irving and people like him call themselves ‘revisionists’, of course. But the study of history itself is nothing more than a painstaking and sometimes painful act of revisionism; A.J.P. Taylor, you might argue, was a revisionist. So, too, Trevelyan. Banging up David Irving intellectually dignifies his repulsive opinions and makes sopping liberals like me squirm with anger at the injustice of it all; that one could face the wrath of the state for contradicting the officially sanctioned view.

Let him state his revisionist notions which, themselves, have been subject to personally expedient revisionism. Let those views exist out there, somewhere way off on the margins, reminding us that academic disciplines are rarely wholly disinterested or wholly objective, but sometimes propelled by the most base of motives.