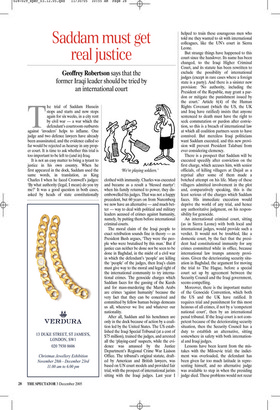 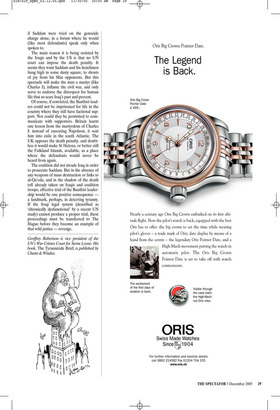 Saddam must get real justice

Geoffrey Robertson says that the former Iraqi leader should be tried by an international court The trial of Saddam Hussein stops and starts and now stops again for six weeks, in a city rent by civil war — a war which the defendant’s courtroom outbursts against ‘invaders’ helps to inflame. One judge and two defence lawyers have already been assassinated, and the evidence called so far would be rejected as hearsay in any proper court. It is time to ask whether this trial is too important to be left to (and in) Iraq.

It is not an easy matter to bring a tyrant to justice in his own country. When he first appeared in the dock, Saddam used the same words, in translation, as King Charles I when he faced Cromwell’s judges: ‘By what authority (legal, I mean) do you try me?’ It was a good question in both cases, asked by heads of state constitutionally clothed with immunity. Charles was executed and became as a result a ‘blessed martyr’: when his family returned to power, they disembowelled his judges. That was not a happy precedent, but 60 years on from Nuremberg we now have an alternative — and much better — way to deal with political and military leaders accused of crimes against humanity, namely, by putting them before international criminal courts.

The moral claim of the Iraqi people to exact retribution sounds fine in theory — as President Bush argues, ‘They were the people who were brutalised by this man.’ But if justice can neither be done nor be seen to be done in Baghdad, in the midst of a civil war in which the defendant’s ‘people’ are killing the ‘people’ of the judges, then Iraq’s claim must give way to the moral and legal right of the international community to try international crimes. The genocide charges which Saddam faces for the gassing of the Kurds and for mass-murdering the Marsh Arabs are crimes ‘against humanity’ because the very fact that they can be conceived and committed by fellow human beings demeans us all, wherever we live and whatever our nationality.

After all, Saddam and his henchmen are only in the dock because of action by a coalition led by the United States. The US established the Iraqi Special Tribunal (at a cost of $75 million), trained the judges, and arrested all the ‘playing-card’ suspects, while the evidence was amassed by the Justice Department’s Regional Crime War Liaison Office. The tribunal’s original statute, drafted by American and British lawyers, was based on UN court models and provided fair trial, with the prospect of international jurists sitting with the Iraqi judges. Last year I helped to train these courageous men who told me they wanted to sit with international colleagues, like the UN’s court in Sierra Leone.

But strange things have happened to this court since the handover. Its name has been changed, to the Iraqi Higher Criminal Court, and its statute has been rewritten to exclude the possibility of international judges (except in rare cases where a foreign state is a party). And there is a sinister new provision: ‘No authority, including the President of the Republic, may grant a pardon or mitigate the punishment issued by the court.’ Article 6(4) of the Human Rights Covenant (which the US, the UK and Iraq have ratified) insists that anyone sentenced to death must have the right to seek commutation or pardon after conviction, so this is a breach of international law at which all coalition partners seem to have connived. But merciless Iraqi politicians want Saddam executed, and this new provision will prevent President Talabani from ever considering clemency.

There is a prospect that Saddam will be executed speedily after conviction on the first charge, which accuses him, with senior officials, of killing villagers at Dujail as a reprisal after some of them made a botched attempt on his life. Many of these villagers admitted involvement in the plot and, comparatively speaking, this is the least serious of the charges which Saddam faces. His immediate execution would deprive the world of any trial, and hence any authoritative judgment, on his responsibility for genocide.

An international criminal court, sitting (as in Sierra Leone) with both local and international judges, would provide such a verdict. It would not be troubled, like a domestic court, by the fact that the president had constitutional immunity for any crimes committed while in office, because international law trumps amnesty provisions. Given the deteriorating security situation in Baghdad, the argument for moving the trial to The Hague, before a special court set up by agreement between the Security Council and the Iraqi government, seems compelling.

Moreover, there is the important matter of the Genocide Convention, which both the US and the UK have ratified. It requires trial and punishment for this most heinous of all crimes, if not by a ‘competent national court’, then by an international penal tribunal. If the Iraqi court is not competent because of the deteriorating security situation, then the Security Council has a duty to establish an alternative, sitting somewhere in safety with both international and Iraqi judges.

Lessons have been learnt from the mistakes with the Milosevic trial: the indictment was overloaded, the defendant has been given far too much latitude in representing himself, and no alternative judge was available to step in when the presiding judge died. These problems would not recur if Saddam were tried on the genocide charge alone, in a forum where he would (like most defendants) speak only when spoken to.

The main reason it is being resisted by the Iraqis and by the US is that no UN court can impose the death penalty. It seems they want Saddam and his henchmen hung high in some dusty square, to shouts of joy from his Shia opponents. But this spectacle will make the man a martyr (like Charles I), inflame the civil war, and only serve to endorse the disrespect for human life that so scars Iraq’s past and present.

Of course, if convicted, the Baathist leaders could not be imprisoned for life in the country where they still have factional support. Nor could they be permitted to communicate with supporters. Britain learnt one lesson from the martyrdom of Charles I: instead of executing Napoleon, it sent him into exile in the south Atlantic. The UK opposes the death penalty, and doubtless it would make St Helena, or better still the Falkland Islands, available, as a place where the defendants would never be heard from again.

The coalition did not invade Iraq in order to prosecute Saddam. But in the absence of any weapons of mass destruction or links to al-Qa’eda, and in the shadow of the death toll already taken on Iraqis and coalition troops, effective trial of the Baathist leadership would be one positive consequence a landmark, perhaps, in deterring tyranny. If the Iraqi legal system (described as ‘chronically dysfunctional’ by a recent UN study) cannot produce a proper trial, these proceedings must be transferred to The Hague before they become an example of that wild justice — revenge.

Geoffrey Robertson is vice president of the UN’s War Crimes Court for Sierra Leone. His book, The Tyrannicide Brief, is published by Chatto & Windus.

Nearly a century ago Oris Big Crown embarked on its first altitude flight. Now the pilot’s watch is back, equipped with the best Oris has to offer: the big crown to set the time while wearing pilot’s gloves – a trade mark of Oris; date display by means of a hand from the centre – the legendary Oris Pointer Date, and a High-Mech movement putting the watch in automatic pilot. The Oris Big Crown Pointer Date is set to take off with watch connoisseurs.