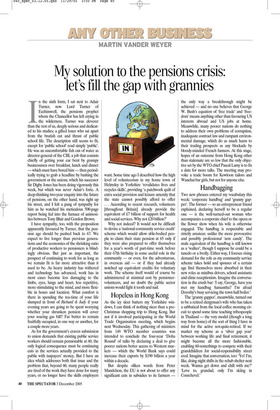 Page 27, 3 December 2005 — My solution to the pensions crisis: let’s fill the gap with grannies
Close

My solution to the pensions crisis: let’s fill the gap with grannies

In the sixth form, I sat next to Adair Turner, now Lord Turner of Ecchinswell, the pensions prophet whom the Chancellor has left crying in the wilderness. Turner was cleverer than the rest of us, deeply serious and dedicated to his studies; a gifted loner who sat apart from the brutish cut and thrust of public school life. The description still seems to fit, except for ‘public school’ read simply ‘public’. He was an uncomfortable fish out of water as director-general of the CBI, a job that consists chiefly of getting your ear bent by grumpy businessmen over breakfast, lunch and dinner — which must have bored him — then periodically trying to grab a headline by bashing the government or the unions, which his successor Sir Digby Jones has been doing vigorously this week, but which was never Adair’s forte. A deep-thinking two-year enquiry into the future of pensions, on the other hand, was right up his street, and I felt a pang of sympathy for him as he watched his meticulous 500-page report being fed into the furnace of animosities between Tony Blair and Gordon Brown.

I have sympathy, too, with the proposition apparently favoured by Turner, that the pension age should be pushed back to 67. We expect to live longer than previous generations and the economics of the shrinking ratio of productive workers to pensioners is blindingly obvious. But just as important, the prospect of continuing to work for as long as we remain fit is far more attractive than it used to be. As heavy industry has withered and technology has advanced, work has in most cases become less damaging to the limbs, eyes, lungs and heart, less repetitive, more stimulating to the mind, and more flexible in hours and location. What comfort is there in spending the tea-time of your life slumped in front of Richard & Judy if your evening years are going to be spent worrying whether your shrunken pension will cover your soaring gas bill? Far better to remain fruitfully occupied, in one way or another, for a couple more years.

As for the government’s craven submission to union demands that existing public service workers should remain pensionable at 60, the only logical consequence must be continuing cuts in the services actually provided to the public with taxpayers’ money. But I have an idea which addresses both that issue and the problem that, beyond 60, many people really are tired of the work they have done for many years, or no longer have the skills employers want. Some time ago I described how the high level of volunteerism in my home town of Helmsley in Yorkshire ‘revalidates lives and recycles skills’, providing ‘a patchwork quilt of extra social provision and leisure amenity that the state cannot possibly afford to offer ... According to recent research, volunteers [throughout Britain] already provide the equivalent of £7 billion of support for health and social services. Why not £20 billion?’ Why not indeed? It would not be difficult to devise a ‘national community service credit’ scheme which would allow able-bodied people to claim their state pension at 65 only if they were also prepared to offer themselves for a year’s worth of part-time work before their 67th birthday in some useful role in the community — or even, for the adventurous, in overseas aid — or if they had already notched up equivalent credits for voluntary work. The scheme itself would of course be administered at minimal cost by pensionervolunteers, and no doubt the public sector unions would fight it tooth and nail.

As the icy sleet batters my Yorkshire windows, I can think of nothing nicer than a preChristmas shopping trip to Hong Kong. But not if it involved participating in the World Trade Organisation meeting, which begins next Wednesday. This gathering of ministers from 149 WTO member countries was intended to conclude the four-year ‘Doha Round’ of talks by declaring a deal to give poorer nations better access to Western markets — which the World Bank says could increase their exports by $190 billion a year within a decade.

But despite silken words from Peter Mandelson, the EU is not about to offer any significant cuts in subsidies to its farmers — the only way a breakthrough might be achieved — and no one believes that George W. Bush’s equation of ‘free trade’ and ‘freedom’ means anything other than favouring US interests abroad and US jobs at home. Meanwhile, many poorer nations do nothing to address their own problems of corruption, inadequate contract law and rampant environmental damage, which do as much harm to their trading prospects as any blockade by bloody-minded French farmers. At this stage, hopes of an outcome from Hong Kong other than stalemate are so low that the only objective set by the WTO chief Pascal Lamy is to fix a date for more talks. The meeting may provoke a trade boom for Kowloon tailors and Wanchai bar girls, but not for anyone else.

Two new phrases entered my vocabulary this week: ‘corporate handbag’ and ‘granny gapper’. The former — so an entrepreneur friend explained, declaring herself to be a regular one — is the well-turned-out woman who accompanies a corporate chief to the opera or the flower show when his wife is otherwise engaged. The handbag is respectable and strictly amateur, unlike the more provocative and possibly professional ‘arm candy’. The male equivalent of the handbag is still known as a ‘walker’, though I suppose he could be a tuxedo or a brolly. Either way, I foresee rising demand for the role as my community service scheme takes hold and spouses of a certain age find themselves more absorbed in their new roles as minibus drivers, school assistants and clinic receptionists. Imagine the conversation in the crush bar: ‘I say, George, have you met my handbag Samantha? I’m afraid Dorothy’s busy servicing the town hall boiler.’ The ‘granny gapper’, meanwhile, turned out to be a retired clergyman’s wife who has taken a sabbatical from the local coffee morning circuit to spend some time teaching tribespeople in Thailand — the very model (though a long way from home) of the sort of thing I have in mind for the active not-quite-retired. If we market my scheme as a ‘silver gap year’ between working life and final retirement, it might become all the more fashionable, enabling 60-somethings to compete with their grandchildren for social-responsibility street cred. Imagine that conversation, too: ‘Yo! I’m, like, doing night shifts in the rehab shelter next week. Wanna get down and chill with me?’ ‘Love to, grandad, only I’m skiing in Courchevel.’