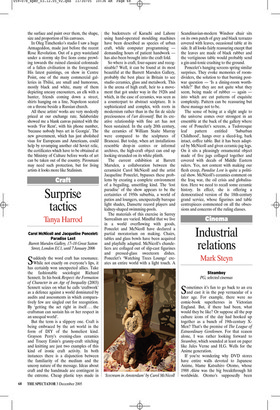 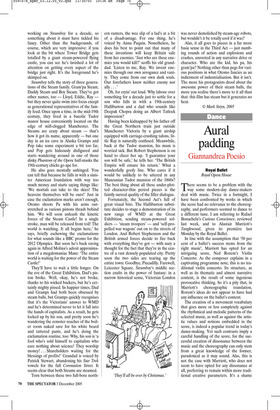 Sometimes it’s fun to go back to an era and cast it in the pop vernacular of a later age. For example, there were no comic-book superheroes in Victorian England. But, if there had been, what would they be like? Or suppose all the pop culture icons of the day had hooked up together as a bunch of 19th-century XMen? That’s the premise of The League of Extraordinary Gentlemen. For that reason alone, I was rather looking forward to Steamboy, which sounded at least on paper like Jules Verne and H.G. Wells for the Anime generation.

If you’re wondering why DVD stores have entire walls devoted to Japanese Anime, blame Katsuhiro Otomo, whose 1988 Akira was the big breakthrough hit worldwide. Otomo’s supposedly been working on Steamboy for a decade, so something about it must have tickled his fancy. Other than the backgrounds, of course, which are very impressive: if you look at the bit where Tower Bridge gets totalled by a giant steam-powered flying castle, you can see he’s lavished a lot of attention on getting every aspect of the bridge just right. It’s the foreground he’s skimped on.

Steamboy tells the story of three generations of the Steam family. Gram’pa Steam, Daddy Steam and Boy Steam. They’ve got other names, too — Lloyd, Eddie, Ray but they never quite swim into focus except as generational representatives of the family feud. Once upon a time, in the mid-19th century, they lived in a bucolic Tudor manor house conveniently located on the edge of mill-clogged Manchester. The Steams are crazy about steam — that’s how it got its name, apparently — but one day in an ice cave in Alaska Gramps and Pop take some experiment a bit too far, and Pop gets hideously disfigured and starts wandering around in one of those dinky Phantom of the Opera half-masks the 19th-century chicks go ape for.

He also goes mentally unhinged. You can tell that because he falls in with a sinister American foundation with way too much money and starts saying things like: ‘We mortals can take to the skies! The heavens themselves will be ours!’ Just in case the exclamation marks aren’t enough, Otomo shoots Pa with his arms outstretched as various pistons thrash behind him. ‘We will soon unleash the kinetic forces of the Steam Castle! In a single stroke, man will be released from toil! The world is watching. It all begins here,’ he says, briefly eschewing the exclamations for what sounds like a BBC promo for the 2012 Olympics. But soon he’s back raving again in Alfred Molina’s adroit approximation of a megalomaniac Manc: ‘The entire world is waiting for the power of the Steam Castle!’ They’ll have to wait a little longer. On the eve of the Great Exhibition, Dad’s piston broke. Well, okay, he’s not broke, thanks to his wicked backers, but he’s certainly mighty pissed. In happier times, Dad and Gramps had both been obsessed by steam balls, but Gramps quickly recognises that it’s the Victorians’ answer to WMD and he’s determined never to let it fall into the hands of capitalists. As a result, he gets locked up by his son, and pretty soon he’s wandering the remoter reaches of the boiler room naked save for his white beard and tattered pants, and he’s doing the exclamation routine, too: Why, his son is ‘a fool who’s sold himself to capitalists who care nothing about science! They worship money! ... Shareholders waiting for the blessings of profits!’ Grandad is voiced by Patrick Stewart, abandoning his Star Trek vowels for the full Coronation Street. It seems clear that both Steams are steamed.

Torn between these two full-bore north ern ranters, the wee slip of a lad’s at a bit of a disadvantage. For one thing, he’s voiced by Anna Paquin. Nonetheless, he does his best to point out that many of these inventions will keep Britain safe from her enemies. ‘Just who are these enemies you would kill?’ scoffs his old granddad. ‘Listen to me, Ray. We invent enemies through our own arrogance and vanity. They come from our own dark souls. Our forefathers knew neither enemy nor ally ... ’ Oh, for cryin’ out loud. Why labour over something for a decade just to settle for a son who falls in with a 19th-century Halliburton and a dad who sounds like Deepak Chopra doing an Albert Tatlock impression?

Having been kidnapped by his father off the Great Northern train just outside Manchester Victoria by a giant airship equipped with carriage-crushing talons, little Ray is naturally confused. Meanwhile, back at the Tudor mansion, his mum is worried sick. But Robert Stephenson is on hand to cheer her up. ‘I guarantee your son will be safe,’ he tells her. ‘The British Empire will ensure his return.’ What a wonderfully goofy line. Who cares if it would be unlikely to be uttered in any Mancunian Tudor mansion of the 1860s? The best thing about all these under-plotted character-thin period pieces is the faintly surreal quality of the filler dialogue.

Fortunately, the Second Act’s full of great visual brio. The Halliburton substitute decides to stage a demonstration of its new range of WMD at the Great Exhibition, sending steam-powered soldiers — ‘steam troopers’ — and ‘self-propelled war wagons’ out on to the streets of London. And Robert Stephenson and the British armed forces decide to fire back with everything they’ve got — with nary a thought for the fact that they’re in the centre of a vast densely populated city. Pretty soon the two sides are tearing up the entire town: Goodbye, Piccadilly. Farewell, Leicester Square. Steamboy’s middle section exults in the power of fantasy: in a narrow historical sense, Victorian London was never demolished by steam-age robots, but wouldn’t it be totally cool if it was?

Alas, it all goes to pieces in a far more basic sense in the Third Act — just numbing rounds of action and explosions and crashes, unrooted in any narrative drive or character. Who are the kid, his pa, his gram’pa? Nothing other than pegs for various positions in what Otomo fancies as an indictment of industrialisation. But it isn’t. The more his protagonists drool about the awesome power of their steam balls, the more you realise there’s more to it all than that: this film has steam but it generates no heat.