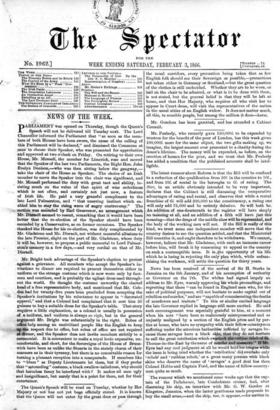 The Queen's Speech will be read on Tuesday, whether by

Her Majesty or not has not yet been officially stated. It is known that the Queen will not enter by the great door or pass through the usual corridors, every precaution being taken that as few English folk should see their Sovereign as possible,—precautions not taken either in Germany or Scotland,—but the great question of the clothes is still undecided. Whether they are to be worn, or laid on the chair to be admired, or what is to be done with them, is not stated, but the general belief is that they will be left at home, and that Her Majesty, who requires all who visit her to appear in Court dress, will visit the representatives of the nation in the usual attire of an English widow. It does not matter much, all this, to sensible people, but among the million it does—harm.