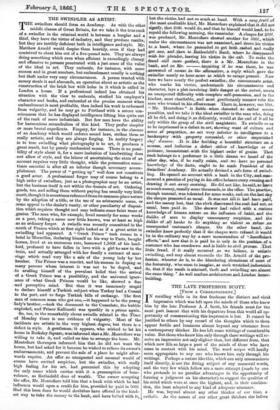 THE SWINDLER AS ARTIST.

THE swindlers should form an Academy. As with the other 1 middle classes of Great Britain, for we take it the true rank of a swindler in the criminal world is between a burglar and a thief, they have the virtue of industry, and they produce moults, but they are terribly deficient both in intelligence and style. Mr. Matthew Arnold would despise them heartily, even if they had contrived to cheat him out of a five-pound note. They are alwaya doing something which even when efficient is exceedingly clumsy and offensive to persons penetrated with a just sense of the value of the ideal in art. They embezzle, for instance, with some success and in great numbers, but embezzlement usually is nothing but theft under very easy circumstances. A person trusted with money steals it and absconds, an operation about as artistic as the construction of the brick box with holes in it which is called in London a house. If a professional indeed has obtained his situation with the view to embezzle, studied his employer'a *character and books, and embezzled at the precise .moment when embezzlement is most profitable, then indeed his work is redeemed from vulgarity, and he may go to Portland with a serene con- sciousness that helms displayed intelligence lifting him quite out of the rank of mere industrials. But few men have the ability for harmonious -scoundrelism of this kind. They prefer simpler or more brutal expedients. Forgery, for instance, in the absence -of an Academy which would enforce sound laws, strikes them as really artistic, and they are always forging. • In reality forgery is to true swindling what photography is to art, it produces a great result, but by purely mechanical means. There is no possi- bility of style about it, for a mere imitation of handwriting does not allow of style, and the labour of ascertaining the state of an account requires very little thought, while the personation some- times essential is after all an inferior though necessary accom- plishment. The power of "getting up" well does not constitute a good actor. A professional forger may of course belong to a high order of swindlers, just as a photographer may be an artist, but the business itself is not within the domain of art. Ordering goods, too, and selling them without paying has usually very-little merit, though it is sometimes redeemed from its common-place nature by the adoption of a title, or the use of an aristocratic name, or some appeal to the dealer's vanity, or other peculiarity of disposi- tion which requires thought and may indicate some faint trace of genius. The man who, for example, lived recently for some weeks as a peer, taking a name now little known, was at least as high as an ordinary forger. A swindle was recently committed in the south of France which at first sight looked as if a great artist in _swindling had appeared. A "Greek Prince" took rooms in a hotel in-Marseilles, declaring himself on his way to Paris, bought -horses, lived at an enormous rate, borrowed 1,500f. of his land- lord, professed to have fallen in love with a girl he saw in the train, and actually arranged with-her family a contract of mar- riage whith read very like a sale of the young lady -by' her -brother. The-Prince-was a convict, and his success in duping so many persons - whose interest it was not to be duped, -and in availing himself of • the prevalent belief that the arrival Of a Greek Prince was a possibility, and the universal ignor- ance of -what Greek Princes -would be like, showed a fine .and perceptive mind. But then it was immensely stupid to declare himself a Turkish subject-when Turkey -had a Consul in the port, and to forge Turkish bills of exchange. The first man of common sense who got one,—it happened to be the young lady's brother, —took the document to the Consulate, the bubble -exploded, and Prince Kallimaki was speedily in a prison again.

So, too, in the remarkably clever swindle related in the Times of Monday there is one evidence -of vulgarity. Most of the incidents are artistic in the very highest degree, but there is -a defect in style. A gentleman, it appears, who wished to let his house in Berkeley Square; was informed that a Mr. Montefiore was willing to take it, and called -on -him to arrange the lease. Mr. Montefiore thereupon informed him that he did not want the house, but had asked for it because he wished to relieve its owner's -embarrassments, and prevent the sale of a place he might after- wards require. An offer so unexpected and unusual would of course have excited suspicion, hut the swindler, with really high feeling for his art, had prevented this by adopting the only name which carries with it a presumption of bene- volence, as Rothschild does of wealth. The owner accepting the offer, Mr. Montefiore told him that a bank with which he had influence would open a credit for him, provided he paid in 500/. Had this been dope he would doubtless have offered in the kind- est way to take the money to the bank, and have bolted with it, but the victim had not so much at hand. With a sangfroid of the most creditable kind, Mr. Montefiore explained that it did not signify, that 2001. would do, and that he himself would lend, to he repaid the following morning, the remainder. A-cheque for 2001. was produced, Mr. Montefiore showed another for 3001., which under the circumstances was not examined, and drove his victim to -a bank, where he pretended to get both smashed and really got one, Rad ,.1..kien to Rothschild's Beak, where he diaappeared with his plunder, leaving his victim in the cab. To make the fraud still more perfect, there is a Mr. Moutefiore in the

shank, and on Mr. inquiring if he was there, he was answered of course :in the _affirmative, a reply -which gave the swindler nearly an hour more in which to escape pursuit. Now here we have nearly the perfect swindler, the consummate actor, who marks his victim, -understands MB circumstances and character, lays a plot involving little danger at the outset, meets an unexpected -difficulty with-complete self-possession, and in the kindest, most charitable, and most gentlemanly manner robs the man who trustedin his effusiveness. There* however, one blot. "Mr. Montefiore" -is liable when detected to 3:ether severe penalties, and we take it the ideal swindler is the man who, doing all he did, and doing it as delicately, would.at the end of it all be only within the grasp of the civil utagiateate. To swindle so as to be imprisoned -is a defect in art, showing -want of -culture and sense of proportion, an ,act -very inferior in intelligence to a. bankruptcy :with _property concealed, or other :unpunished chef dkeuvre. it is like -building a beautiful structure -on a morass, and indicates ,a defect either of , knowledge -or of patience, inconsistent-with the highest -order of genius. That rank belongs to a performer in a, little drama -we heard of the other flay, who, U he really exists, and -we have no personal knowledge of the :facts, ought to be made President of the Swindlers' Academy. He actually devised a safe form of swind- ling. He opened -an .account -with a bank in the City, -and oom- xnenced a practice of paying in his office balance every evening and drawing it out every -morning. He did not like, hemid., to leave so.much money, smelly some thousands, in the office. The practice, though unusual, -was tolerated for sonic -weeks, and -cm.the,last slay

the cheque presented aa usual. It was not had been paid, and the money lost, that the clerk discovered the cash had not, as usual, . been _paid .in. The drawer had relied with a curious knowledge of human nature on the influence , of habit, and the dislike of men to .display unnecessary suspicion, _and the dislike of _all banks to .do anything so vieleut as refine -an unsuspected " customer's _cheque. On the other band, the swindler knew perfectly- that if the cheque were refused it would be in the ordinary way by a mere memorandum of "Insufficient effects," and now that it is paid he is only in the position of a customer .who has overdrawn and is liable to civil process. What -little fraud, if it really occurred as we believe, is artistic swindling, and may almost reconcile the Mr. Arnold of the pro- fession, whoever lie is, to the blunderiug clumsiness of most of the fraternity, who seem to imagine, SA such wretched industrials do, that if the result is attained, theft and swiudlipg are almost the same thin. As. well confuse architecture and London house- building.