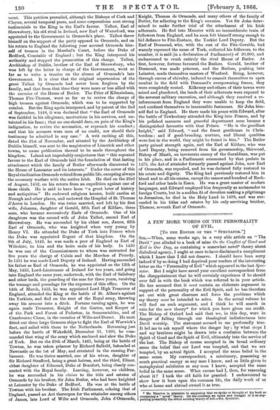 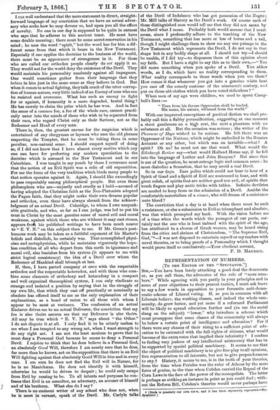 A FEW MORE WORDS ON THE PERSONALITY OF EVIL.

[To THE EDITOR OE' THE " SPECTATOE."1 Sra,—When, some weeks ago, in a very able article on "The Devil" you alluded to a book of mine On the Conflict of Good and Evil in Our Day, as containing a somewhat novel* theory about diabolical agency, I ought at once to have disclaimed a compliment which I knew that I did not deserve. I should have been sorry indeed if by so doing I had deprived your readers of the interesting letter on the "Personality of Evil" which appeared in the last Spec- tator. But I might have saved your excellent correspondent from the disappointment that he will certainly experience if he should ever fall in with the book which was referred to in your article. He has assumed that it must contain an elaborate argument in support of the personality of the Evil Spirit, and he has therefore set out with great clearness and force the problems which my theory must be intended to solve. In the actual volume he will find no such argument, and I think he will search in vain for the new theory* for which you have given me credit. The Bishop of Oxford had said that we, in this day, were in danger of falling through our theological indistinctness into Devil worship. The statement seemed to me profoundly true. It led me to ask myself where the danger lay ; by what steps I and my brethren might be drawn into a confusion between the Spirit of Good and the Spirit of Evil, ultimately into the service of the last. The Bishop of course accepted in its broad ordinary sense the belief that our Lord was tempted, and that we are tempted, by an actual Spirit. I accepted the same belief in the same sense. My correspondent, a missionary, possessing as much practical energy as any man I know, and as little given to metaphysical subtleties as any man I know, accepted the same belief in the same sense. What excuse had T, then, for reasoning about it? I took the old faith for granted. I endeavoured to show how it bore upon the common life, the daily work of us who at home and abroad owned it as true.

* Mr. Maurice is mistaken in supposing that we spoke or thought of his book as • containing a" novel" theory. On the contrary, we spoke and thought of it as sup. porting powerfully the oldest existing theory of evil—En. Spectator. I can well understand that the mere statement in direct, straight- forward language of my conviction that we have an actual adver- sary who seeks how he may devour us, had upon you all the effect of novelty. No one in our day is supposed to be quite in earnest who says that he adheres to this ancient tenet. He must have some double meaning; there must be some secret reservation in his mind ; he uses the word "spirit," but the word has for him a dif- ferent sense from that which it bears in the New Testament. Especially if one applies the doctrine to the business of the world, there must be an appearance of strangeness in it. For those who are called our orthodox people clearly do not apply it so. They would not for the world deny the existence of the Devil. They Would maintain his personality resolutely against all impugners. One would sometimes gather from their language that they believe in him just in the same sense as they believe in God. But when it comes to actual fighting, theytalk much of the utter corrup- tion of human nature, very little indeed of an Enemy of man who can be resisted and overcome. What has such an enemy to fight for or against, if humanity is a mere degraded, brutal thing? He has merely to claim the prize which he has won. And in fact the sense of a common foe, a foe of the whole race, cannot practi- cally enter into the minds of those who wish to be separated from their race, who regard Christ only as their Saviour, not as the Redeemer and Head of every man.

There is, then, the greatest excuse for the suspicion which is entertained of any clergyman or layman who uses the old phrases respecting the Tempter, that he must be taking them in some peculiar, non-natural sense. I should suspect myself of doing so, if I did not know that I have almost every motive which any one can have for preferring any modern speculation to the doctrine which is assumed in the New Testament and in our Catechism. I was taught in my youth by those I reverence most that the notion of an Evil Spirit was a relic of old superstition. For me the force of the very tradition which binds many people to that notion operates against it. Again, I should like exceedingly to pass respectably among philosophical people. But even those philosophers who are—unjustly and cruelly as I hold—accused of having adopted the Christian faith as the Neo-Platonists adopted the Pagan faith, that they might make their own dreams popular and orthodox, even these have always shrank from the acknow- ledgment of an actual Devil. Coleridge, to whom I owe unspeak- able gratitude, and who, so far as I can judge, was led to put his trust in Christ by the most genuine sense of moral evil and moral weakness, against which those who are without it may cast stones, appears frost his published writings to have been much nearer to "E. V. N." on this subject than to me. If Mr. Green's post- humous work may be taken as a faithful exponent of his Master's beliefs and disbeliefs, he certainly was. That accomplished physi- cian and metaphysician, while he maintains vigorously the hope- less condition of all who depart from this earth in ignorance and moral evil, also banishes from his system (it appears to me with strict logical consistency) the idea of a Devil over whom the Redeemer of Mankind shall triumph at last.

If, then, I have parted company at once with the respectable orthodox and the respectable heterodox, and with those who com- bine some elements of orthodoxy and heterodoxy in a compact and well organized theosophical system, I can only vindicate so strange and isolated a position by saying that in the struggle of my own life, that which they cast off practically or nominally as obsolete has offered itself to me as the only explanation of their explanations, as a bond of union to all those with whom I appear to be most at variance. The confession of an actual Enslaver drives me to an actual Deliverer, the conviction that my foe is also theirs assures me that my Deliverer is also theirs. All may be true which "E. V. N." says about "the Other." I do n'ot dispute it at all. I only find it to be utterly useless to me when I am tempted to any wrong act, when I want strength to do any right act. I am not the least anxious to prove that he must deny a Personal God because he seems to deny a Personal Devil. I rejoice to think that he does believe in a Personal God, an absolutely Good Will, therefore I am nearly sure that he does, far more than he knows, act on the supposition that there is an Evil Will fighting against that absolutely Good Will in him and in every man. I am sure he does not find the Evil will in Nature, for he is no Manichman. He does not identify it with himself, otherwise he would be driven to despair ; he could only escape from Evil by ceasing to be. To all intents and purposes he con- fesses that Evil is an aasaulter, an adversary, an accuser of himself and of his brethren. What else do I say?

There is no eminent writer of any school who does not, when he is most in earnest, speak of the Devil. Mr. Carlyle talks of the Devil of Indolence who has got possession of the Negro ; Mr. Mill talks of Slavery as the Devil's work. Of course each of these distinguished men would tell me that they did not mean by the Devil what I mean. Probably both would assume that I must mean, since I professedly adhere to the teaching of the New Testament, something that has more or less of horns and a tail, though I might challenge them to show me any one paisage in the New Testament which represents the Devil, I do not say in that shape but in any bodily shape at all. I should not try—I should be unable, if I did try—to dispossess them of this opinion about my faith. But I have a right to say this as to their own,—" You did mean something when you spoke of a Devil. You abhor words, as I do, which have no reality corresponding to them. What reality corresponds to those words when you use them? How comes it that whenever you get into a genuine white heat you cast off the comely costume of the nineteenth century, and put on those old clothes which you have voted ridiculous ? "

When men of my age were children, we used to spout Camp- bell's lines :—

"Then from his throne Oppression shall be hurled,

His name, his nature, withered from the world."

With our improved conceptions of poetical diction we shall pro- bably call this a flabby personification, suggesting at one moment a stout gentleman on a high seat, the next a phantom with no substance at all. But the occasion was serious ; the writer of the Pleasures of Rope wished to be serious. He felt there was an Oppressor of the Nations, which might be embodied in the Russian Autocrat or any other, but which was an invisible—what? A spirit? Oh no ! he must not use that word. What would the Edinburgh Review say—what would Holland House say, if he fell into the language of Luther and John Bunyan ? But since that is out of the question, he must outrage logic and common sense : he must diabolize a Sensation, that he may avoid a real Devil.

So in our days. Ears polite which could not bear to hear of a Spirit of Good and a Spirit of Evil are sentenced to hear, and with great relish, of spirits that are neither good nor evil, of spirits that touch fingers and play antic tricks with tables. Infinite devilries are needed to keep from us the admission of a Devil. Amidst the comfortable materialism of a séance, who will dream of a resistance unto blood?

The conviction that a day is at hand when there must be such a resistance, or else a submission to Evil as triumphant and absolute, was that which prompted my book. With the vision before me of a time when the words which the youngest of our poets, cer- tainly not the one who is least imbued with the spirit of the age, has attributed to a chorus of Greek women, may be heard rising from the cities and shrines of Christendom, "The Supreme Evil, God,"*—I was not disposed to entertain myself or my readers with novel theories, or to bring proofs of a Personality which I thought would prove itself so conclusively.—Your obedient servant, F. D. ALtuarcrs.