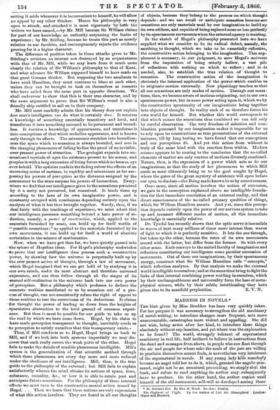 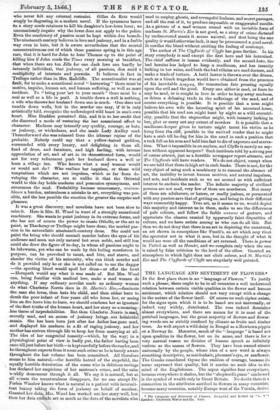 Tan hint given by Miss Braddon has been- very quickly taken. For her purpose it was necessary to strengthen the old machinery of novel-writing, to introduce changes -more frequent, acts more unaccountable, catastrophes more violent and appalling. She did not wish, being .artist after her:kind, to introduce these things absolutely without explanation, and yet where was the explanation to be found? The world, strangely tolerant of auperns.tural machinery in real life, half inclined to believe in instructions from the dead and messages from above, in people who can float through the air and people fer whose sake the souls of the just are willing to proclaim themselves arrant fools, is nevertheless very intolerant- of the supernatural in novels. . If any young lady kills tsomehoill because an angel told her to do it, -which, granted the angelic Gem- mend, might not be an unnatural proceeding, we simply shui, the book, and refuse to read anythiug its author may subsequently have to produce. On the other hand, the author cannot avail himself of the old histrumentraelf-will as developed areOng those • St. diartia's Eve. By Mrs, FL Wood. Lo.,d4n: Tinsley.

The Clyffards of Clyffe. By the Author of Lost Sir liassinobercf. London: Hurst and Blaokett. who never felt, any external restraint. Gilles de Betz would simply be disgusting in a modern novel. If the tyrannous baron in a story sends retainers to kill his daughter's low-born lover, we unconsciously. inquire why the lover does not apply to the police. Even the machinery,of , passion must be kept within due bounds. The nineteenth century believes in love and jealousy, and in a feeble way even in hate, but it is aware nevertheless that the mental -concentrativeness out of which these passions spring is in this age rare, that it is hard for John to hate Thomas up to the point of killing him if John reads the Times every morning at breakfast, that when there are ten Jills for one Jack love can hardly be intensely individual, that jealousy, of all passions, dies amid a multiplicity of interests and pursuits. It believes in fact in Trollope rather than in Mrs. Radcliffe. The sensationalist was.at fault, for to make a sensational novel " harrowing " there must be motive, impulse, human act, and human suffering, as well as mare incident. To "bring your 'art to your month" there must be a soul as well as a life in peril. A tumble down a well is nothing; A wife who throws her husband down one is much. One 'does not tumble down wells, but in the murder one may, if it is only artistically told, recognize the undeveloped wild beast in one's own heart. Miss Braden perceived this, and it is to her credit that she discerned a mode of Teetering the lost sensational effect to -character. Madness may intensify any quality, courage, or hate, or jealousy, or wickedness, aud she made Lady Audley mad. Thenceforward she was released from the irksome rigine of the probable. Nobody could say that a -yellow-haired goddess, surrounded with every luxury, and delighting in them all, fond of dress, and furniture, and high feeding, with intense appreciation of art, and of art in its -domesticated form, would not for very refinement push her husband down a well or burn a village inn. -Who knows what a mad woman would -or would not do? Who realizes her impulses, or those wild temptations which are not impulses, -which so far from de- veloping the character, are so unlike it that the Oriental world to this day holds madness and possession synonymous, and reverences the mad. Probability became unnecessary, vraisem- -blance a burden, naturalness a mistake in art, everything was pos- sible, and the less possible the emotion the greater the surprise and pleasure.

It was a great discovery, and novelists have not been slow to seize it. Here is Mrs. H. Wood in want of a strongly sensational machinery. She wants to paint jealousy in its extreme forms, and she has not of course the power to create Othello, or the art to paint, as Thackeray or Trollope might have done, the morbid pas- sion in its naturalistic nineteenth-century dress. She could not paint the being who should commit murder. before the eyes of his audience and seem not only natural • but even noble, and still less could she draw the figure of to-day, in whom all passions ought to be lukewarm, yet who can be made by this feeling murderous in purpose, can be provoked to taunt, and bite, And starve, and slander the victim -of his animosity, who can think murder and do it provided only he or she is not called on to use the dagger —the spurting blood mould spoil her dress—or offer the bowl —Herapath would say what it • was made of. But Mrs. Wood can, being familiar with medical lore, make A mad woman do anything. If any ordinary novelist made an ordinary woman do what Charlotte Norris does in St. Martin's Eve,—fascinate the man she loves, then hate his child, and then either burn to death the poor infant of four years old who loves her, or seeing him on fire leave him to burn, we should condemn her as ignorant of the first truths of the human heart, and her story as a meaning- less tissue of improbabilities. But then Charlotte Norris is mad.4 secretly mad, and an access of jealousy brings out hOinicidal mania. She has been born just after her father has gone mad, and displayed his madness in a flt of raging jealousy, and her mother has striven through life to keep her from marrying at all. The idea of her congenital insanity—which, by the way; in a physiological point of view is badly put, the father having been sane till just before her birth—is kept carefully before the reader,and he throughout expects from it some such crime as he is barely aware Oroughout the last volume has been committed. All therefore seems to him natural,—.the horrible hatred of the stepchild, the equally horrible detestation of the nurse who in delirious ravings has declared her suspicions of her mistress's crime, and the calm vorldly demeanour through it all. We say it is natural, but at all szTents the unnaturalness disappears, for no one except Dr. Forbes Winslow knows what is natural in a patient with intermit- tent lunacy taking the form of jealousy on behalf of another. Granted her data, Mr.,. Wood has worked out her story well, but then her data e,xiltyle art as much as the data of the novelists who used to employ ghosts, and revengeful Italian's and secret pasaages, and all the rest of it, to produce impossible or exaggerated results. As a picture of a mad woman cursed with an invisible Icaut cif _madness St. Martin's Eve is not good, as a story of _crime dictated by undiscovered mania it seems natural, And that being the one quality it would otherwise lack, it may be pronounced a good novel. It•eurdles the blood without exciting the feeling of contempt.

The author of The Clyffards of Clyffe has gone farther. In his story everybody is mad except the first hero and his .betrothed. The chief sufferer is insane evidently, and the second hero, the bad heroine has helped to keep .a :madhouse, and has insanity lurking in her veins, .andboth theand villains are mad doctors, and make a trade of torture. A lurid horror is thrown over the drama, such as a Greek tragedian would have obtained from the presence of his inevitable arayss, the remorseless fate pressing equally upon the-evil_and the good. Every one either is mad, or fears he may be mad, or is sought in love in order to.keep away madams, or drives a debasing trade in the sufferings of the mad, and of reourse everything is possible. It is possible that a man .might believe his own wife the haunting spirit of his ancestral home, .possible that his mad son might hunt by night as a wild eccentri- city, possible that the stepmother might, with insanity lurking in her, plot or carry out Any extent of murders It is possible that a .madhouse-keeper given to torture might taunt his victim as he hung from the cliff, possible to the excited reader that he might hate a crab till he dug for him in the sand in such a position that a rock fell on his arm and held him fast to die of exposure and starva- tion. IVhat is impossible man asylum, and Clyffe is merely an asy- lum without apparent keepers? Such incidents told by a strong pen of course attract, just as a horrible newspaper report attracts, and The Clyffards will have readers. We do not object, except when we are told that there ishigh art in such books. There is not, for the very object of using such a machinery is to -conceal the absence of art, the inability to invest human motives, and natural impulses, and acts, and incidents such as we see Around us with sufficient interest to enchain the reader. The infinite majority of civilized persons are not mad, very few of them are murderers. Not many of them are adulterers, or haters, or madly jealous, or permeated with any passion save thatof getting on, and being in their different ways reasonablyhappy. True art, as it seems to us, would depict this majority and interest us in them, make -us see the differences of pale colours, and follow the feeble nuances of gesture, and appreciate the, chasms created by apparently faint disparities of culture, and, we have artists among us who can do all this. But then we do not deny that there is an art in depicting the unnatural, an art shown in conceptions like • Fuseli's, an art which may rivet the spectator not in what it sees, but in the thought of what it would see were all the conditions of art reversed. There is power in Vathek as well as Hamlet, and we complain only when the one is raised by false criticism to the level of the other. Granted an atmosphere in which light does not elicit colour, and St. Martin's Eve and The Clyffards of Clyffe are singularly well painted.