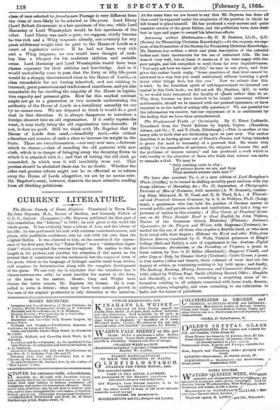 The Divine Comedy of Dante Alighieri. Translated in Tema Rima By John Dayman, M.A., Rector of Skelton, and formerly Fellow of C. C. C., Oxford. (Longman.)—Mr. Dayman published the first part of this translation, the "Inferno," in 1843; he now gives to the world the whole poem. It has evidently been a labour of love, and the labour of his life ; he has performed his task with extreme conscientiousness, and places, with justifiable confidence, side by side with his own lines the original Italian. It was objected to him, on the occasion of the appear- anew of his first part, that the-" Term Rims" was a "deleterious ingre- dient" which. corrupted the version throughout. He replies to this at length, in his preface, and justifies his retention of the metre on the ground that it constitutes not the mechanical, but the organical form of the poem, which in the language of Schlegel unfolds itself from within, and acquires its determination along with the complete development of the germ. We can only say in rejoinder that the translator has to choose between two evils; he must sacrifice the matter to the form, or the form to the matter. Messrs. Cary and Wright have chosen the latter course; Mr. Dayman the former. He is com- pelled to write in fetters ; what may have been natural growth in the case of the original production is only distortion in the imitation.

class of men selected to found a-new Peerage is very different from i At the same time we are bound ta say that Mr. Dayman has done all

that could be expected under the exigencies of the position in which he felt bound to place himself.' He has prodnced a very-correct and quite readable version of the great -Italian, and his publishers have done their best in type and paper to secontlhis laborious efforts.