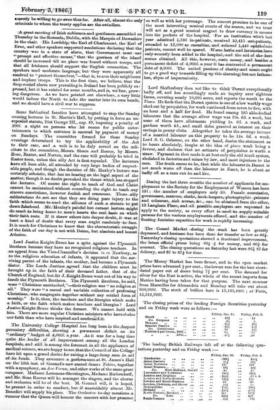 because they have no recognized religious- teachers. In WI appeal from the VicesChaucellor's :decision in re Newbury, As to the, religious education of infants, it Appeared that the sur- -viviug parent of the infants, the mother, had become a Plymouth -Sister. The -Lords Jostioes agreed that .the children must be brought up in the faith -of ,their deceased father, . that of, the -Church of Eugland, but Sir J. Knight Bruce went out of his way to insult the Plymouth Brethren. The Plymouth Brethren, he said, were " Christians unattached,",-their religion was" no religion at all." They were " a casual and variable collection of professing -Christians, who congregate'.together-without any settled form of worship." Is it, then, the-teachers :and the -liturgies which make .a faith, or the faith which makes teachers and liturgies ? Lord Justice-Knight Bruce thinks the former. We cannot hold with him. There are more regular Christian ministers who haveshaken -our-faith than who have inspired and confirrLdit.