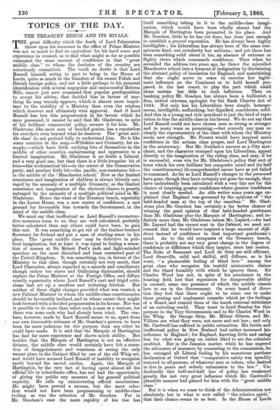 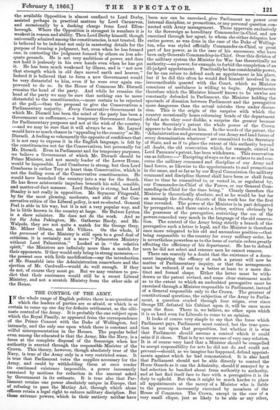 THE TREASURY BENCH AND ITS RIVALS.

THE great difficulty which the death of Lord Palmerston threw upon his successor in the office of Prime Minister was not so much to find an equivalent for his hard sense and experience in counsel, as to find what might as far as possible command the same amount of confidence in that "great middle class" to whom the destinies of the country are notoriously committed. The truth no doubt is that Lord Russell himself, owing in part to being in the House of Lords, quite as much to the blunders of his recent Polish and Danish foreign policy, and not a little perhaps to his personal identification with several unpopular and unsuccessful Reform Bills, cannot just now command that popular predisposition to accept his advice, that decided bias in favour of any- thing he may warmly approve, which is almost more impor- tant to the stability of a Ministry than even the wisdom which deserves and ultimately wins approval. And if Lord Russell has lost this prepossession in his favour which he once possessed, it cannot be said that Mr. Gladstone, in spite of his brilliant commercial policy, secures it for him. Mr. Gladstone, like most men of decided genius, has a reputation for crotchets even beyond what he deserves. The 'great mid- dle class' do not pretend fully to understand him. He is like some counties in the map,—Wiltshire and Cromarty, for ex- ample,—which have little outlying bits of themselves in the middle of other counties, embarrassing and oppressive to a limited imagination. Mr. Gladstone is no doubt a Liberal, and a very good one, but then there is a little irregular bit of him—the ecclesiastical bit—in the centre of the Conservative party, and another little bit—the pacific, non-resistance bit— in the middle of the Manchester school.' Now as the limited conscience and imagination of children is always bitterly out- raged by the anomaly of a multiple Cromarty, so the limited conscience and imagination of the electoral classes is greatly outraged by the anomaly of a multiple political mind in Mr. Gladstone. Hence the want of the Treasury bench, especially in the Lower House, was a new centre of confidence, a new ground for favourable bias towards the Government, in the mind of the middle class.

But it is when we come to think of the Administration not absolutely, but in what is now called "the relative spirit," that their chance seems to us best. In the House of Lords the available Opposition is almost confined to Lord Derby, assisted perhaps in practical matters by Lord Carnarvon, and occasionally by a dashing charge from Lord Ellen- borough. Where the Opposition is strongest in numbers it is weakest in reason and ability. Then Lord Derby himself, though universally admired among the constituencies, is not trusted. He is believed to be indolent not only in mastering details for the purpose of forming a judgment, but, even when he has formed one, in contesting the judgment formed by others on less ade- quate grounds. He is not very ambitious of power, and does not hold it jealously in his own hands even when he has got it. He has been much weakened by illness, and is "not now -that strength which in old days moved earth and heaven." Indeed it is believed that to form a new Government would be very distasteful to him, even if he were ever again em- powered to do so. In the House of Commons Mr. Disraeli remains the head of the party. And while he remains the bead of the party we may be sure that nothing can be more 'distasteful to the constituencies,—more certain to be rejected at the poll,—than the proposal to give the Conservatives a Parliamentary majority. Every Conservative Government in which Mr. Disraeli has been the mind of the party has been a Government on sufferance,—a temporary Government formed for Parliamentary purposes and not at the wish of the country, —and we may be sure that it will always be so. Mr. Layard would have as much chance in "appealing to the country" as Mr. Disraeli. A feeling so vehemently the opposite of confidence that it is not easy to express it in the English language, is felt by the constituencies not for the Conservatives, but personally for Mr. Disraeli. Even in Parliament and for temporary purposes, we believe a Government of which Mr. Disraeli should be Prime Minister, and not merely leader of the Lower House, would be impossible. Lord Cranborne is strong, but then Lord Cranborne is rather Tory at heart than Conservative, which is mot the feeling even of the Conservative constituencies. He would have launched the country into a war for the South. He has fierce aristocratic impulses beneath his solid, sensible, and matter-of-fact manner. Lord Stanley is strong, but Lord Stanley is not really in opposition. Mr. Seymour Fitzgerald, by far the most pleasing, moderate, and able of the Con- servative critics of the Liberal policy, is not re-elected. General Peel is able in his way, but it is not a very popular way, and he is little known in the country at large. Sir Bulwer Lytton is a show minister. He does not do the work. And as for Sir John Pakington, Mr. Gathorue Hardy, and Mr. Walpole, they are not quite a match for Sir George Grey, Mr. Milner Gibson, and Mr. Villiers. On the whole, if the personnel of the Ministry is still open to a good deal of criticism, it is certainly not a mere "Palmerston Ministry without Lord Palmerston." Looked at in "the relative spirit," the Ministers are infinitely more than a match for their opponents. If they would only bring in strong measures,— the present men with little modification—say the introduction of Mr. Stansfeld into the Administration somewhere and the ejection of Mr. Cardwell—would do well enough. If they do not, of course they must go. But we may venture to pre- dict that their successors would still be a recast Liberal Ministry, and not a scratch Ministry from the other side of the House.