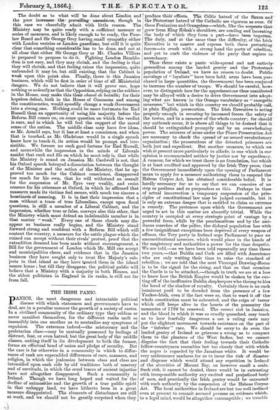 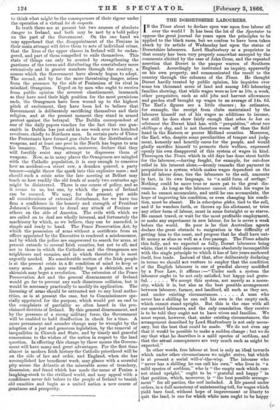 DANICS, the most dangerous and intractable political

disease with which statesmen and governments have to deal, are in s peculiar manner the growth of a society of castes. In a civilized community of the ordinary type they seldom or never manifest themselves, for the different ranks melt so insensibly into one another as. to neutralize any symptoms of repulsion. The extremes indeed—the aristocracy and the proletarian class—may be mutually possessed by feelings of distrust, fear, or even hatred; but the great body of the middle classes, uniting itself in its development to both the former, forms an effectual bond of union and pledge of secluity. But the case is far otherwise in a community in which to-differ- ences of rank are superadded differences of race, manners, and religion* in which the jealousies between class and class are intensified upon each side by old traditions both of mastery and of servitude, in which -the cruel traces of ancient injustice have not altogether disappeared. Such a community is Ireland. Though we have long hoped and waited for the decline of animosities and the growth of a true public spirit in that unhappy land, we have hitherto been in a. great measure disappointed. The elements of disturbance are still at work, and we should not be greatly surprised when they, produce their effEcts. The Celtic hatred of the Saxon and the Protestant hatred of the Catholic are vigorous as ever. Of these Fenianism and Orangeisra—which, like. the serpents that grew' from Ring ZOhak's shoulders, are rending and lacerating the body of which they form a part—have been. begotten. The duty, and at the- same time the difficulty, of the Irish Executive is to master and repress both these perturbing forces—to crush with a strong hand the party. of rebellion, and yet to curb the violence of the party that aspires to ascendancy.

Mato there exists a panic wide-spread and not entirely, groundless among the landed gentry and the Protestant population of Ireland,. we have no reason to, doubt. Public meetings of "loyalists" have been held, arms have been par- chased-in large, quantities; the Government has been conjured to increase the number of 'troops. We-should 'be-careful, how-

ever, to distinguish how fir the apprehensions 'thus manifested may be alloyed 'with a desire to drive Government into adopt- ing what are known in the' Orange vocabulary as " energetic

measures," but which in this country we-should probably-call, in plain Thiglish, persecution. The Irish Executive is acting properly enough in securing by increased forces the safety of the towns, and 'in a measare- of:the whole country; for should any outbreak occur, it-is-above-all things to be-desired that it should be extinguished promptly and' by an overwhelming power. The seizures of arms under -the' Peace Preservation Act are necessary to check the spread 'of' swarmed -revolutionary organization ; the prosecutions of the detected prisoners are- both just and expedient. Bat another measure, to which we wish at present more particularly to allude; is one which in our opinion is recommended neither by justice nor by expediency. A rumour, for which we trust there is no foundation, but which is at least credited and approved by the Irish Triry press, that the Government immediately upon the opening of Parliament mean to apply for s measure -authorizing them to suspend the Habeas Corpus Act, has obtained considerable belief. It is hardly necessary for us to say that we can conceive of no step so perilous and so purposeless as this. Perhaps in- time of' actual insurrection a temporary suspension of the prin-

ciples of constitutional law may be judged excusable, but it is only an extreme danger that is entitled to claim so extreme

a remedy. The pretences upon which. the Government are- urged to set in this matter are absurdly trivial. While the country is occupied at every strategic point of vantage by a powerful force, while by the proclamations and by the assi- duous searches of the police, the disloyal population has with a few insignificant exceptions been deprived of every weapon of offence, the Tory party in Ireland urge Parliament to pass an unconstitutional measure, which would place in the hands of the magistracy and authorities a power for the time despotic. We are told,—as we have been told repeatedly any time these two years,—that Dublin and Cork are filled with Americans who are only waiting their time to raise the standard of rebellion ; we are told that the next Viceregal Drawing-Room is to be the signal for the rising, and that on that occasion the Castle is to be attacked,—though in truth we are at a loss to know how the British Empire would be shaken by the cut, ting ofrof the inoffensive Dublin shopkeepers who throng to kiss the hand of the shadow of royalty. Certainly there is no such imminent peril to be dreaded from the presence of a few Yankee-Irish, even if the fact were so, that. to ward it off the whole constitution must be subverted, and the reign of terror which still keeps alive in the hearts of the peasantry the memories. of 1798 be renewed. The recent riot in Jamaica, and the blood in which it was so cruelly quenched, may teach us to how. fearfully dangerous a use a- ruling caste may put the slightest movement towards resistance on the part of the "inferior" race. We- should be sorry to do even the landed gentry of Ireland so grievous a wrong as to compare them to the planters of the West Indies, but we cannot disguise the fact that their feeling towards their Catholic fellow--countrymen resembles but too closely that with which the negro is regarded by the Jamaican white. It would be very midsummer madness for us to incur the risk of disaster and disgrace which would attend any repetition in Ireland of the atrocities of Morant Bay, on however small a scale. Such risk, it cannot be denied, there would be in. entrusting with irresponsible authority any excited and prejudiced body of men, and practically the Irish gentry would be entrusted with such authority by the suspension of the Habeas Corpus Act. The local authorities in Ireland are but too well inclined even at present to commit accused persons on evidence whieh, to a legal mind, would be altogether contemptible ; we tremble to think what might be the consequences of their rigour under the operation of a virtual loi de suspects.

In truth there are at present but two sources of absolute danger to Ireland, and both may be met by a bold policy on the part of the Government. On the one hand we may apprehend that the disappointment of the Fenians in their main attempt will drive them to acts of individual crime, that the lives of the upper classes in Ireland will be endan- gered, and part of them compelled to exile themselves. This state of things can only be averted by strengthening the garrisons of the towns and distributing the constabulary more extensively and in greater numbers through the country, a course which the Government have already began to adopt. The second, and by far the more threatening danger, arises from the presence by the side of Fenianism of its rival in mischief, Orangeism. Urged on by men who ought to receive from public opinion the aeverest chastisement, inasmuch as they have used their high position for the most pernicious ends, the Orangemen have been wound up to the highest pitch of excitement, they have been led to believe that Government is deliberately sacrificing themselves and their religion, and at the present moment they stand in armed protest against the betrayal. The Dublin correspondent of one of the daily papers vouches for the fact that one gun- smith in Dublin has just sold in one week over two hundred revolvers, chiefly to Northern men. In certain parts of Ulster the Protestants have formed gun clubs for the distribution of weapons, and at least one peer in the North has begun to arm his tenantry. The Orangemen, moreover, declare that they will forcibly resist any attempt to dispossess them of weapons. Now, as in many places the Orangemen are mingled with the Catholic population, it is easy enough to conceive how an accident—a street row, a drunken quarrel, a party banner—might throw the spark into this explosive mass ; and should such a crisis arise the late meeting at Belfast may teach us how readily the old feuds of nearly two centuries ago might be disinterred. There is one course of policy, and as it seems to us, but one, by which the peace of Ireland can be secured. We may, for the present, put aside all considerations of external disturbance, for we have too firm a confidence in the honesty and strength of President Johnson's Government to dread any attack of Fenians or others on the side of America. The evils with which we are called on to deal are wholly internal, and fortunately the machinery by which, as we believe, they can be amended, is simple and ready to hand. The Peace Preservation Act, by which the possession of arms without a certificate from an officer appointed by the Executive is rendered a misdemeanor, and by which the police are empowered to search for arms, at present extends to several Irish counties, but not to all, and not to those in which the Catholics and the Orangemen are neighbours and enemies, and in which therefore it is most urgently needed. No considerable section of the Irish people is at the present crisis in a fit condition of mind to keep or carry arms. A panic may readily beget a skirmish, and a skirmish may beget a revolution. The extension of the Peace Preservation Act and the general disarmament of Ireland would go far to prevent any such disastrous collision, but it would be necessary practically to modify its application. The licensing of arms should be entrusted not to any local autho- rities, as is at present the case, but to Commissioners spe- cially appointed for the purpose, which would put an end to the complaints of partiality so often heard in the pro- claimed districts of Ireland. By this general disarmament, and by the presence of a strong military force, the Government will be enabled to hold disaffection in check for a time. A more permanent and sounder change may be wrought by the adoption of a just and generous legislation, by the removal of inequalities in Church and State, and by timely and graceful concessions to the wishes of the nation in respect to the land question. In effecting this change by these means the Govern- ment will have many and great advantages. For the first time almost in modern Irish history the Catholic priesthood will be on the side of law and order, and England, when she has accomplished her beneficent work, may glance with a scornful pity across the Atlantic at the miserable scene of treachery, dissension, and fraud which has made the name of Fenian a laughing-stock to the civilized world, and may appeal with a confidence never felt before to the people of Ireland to banish old enmities and begin as a united nation a new course of greatness and prosperity.