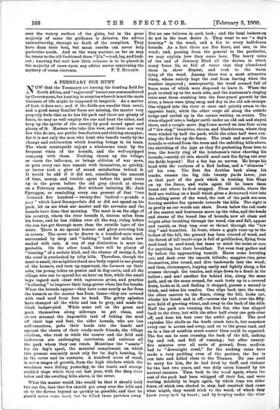 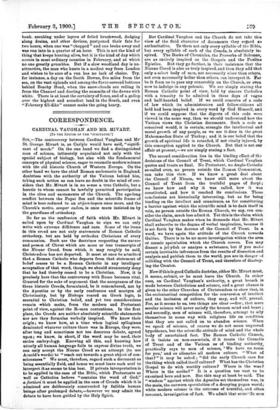 NOW that the Yeomanry are leaving the hunting field for South Africa, and "registered' horses are commandeered by Government, fox bunting in counties where it isnot the main business of life might be supposed to languish. As a matter of fact, it does not; and if the fields are smaller than usual, and a good many familiar faces are missing, the master very properly feels that as he has his pack and there are plenty of foxes, he may as well employ the one and hunt the other, and keep up the spirits of the county by good sound sport and plenty of it. Masters who take this view, and there are very few who do not, are public benefactors and shining examples; for it is not only the men who hunt who benefit vastly by the change and exhilaration which hunting brings in its train. The whole countryside enjoys a wholesome tonic by the frequent visits of the hounds, and the well-equipped company with them. Nothing cheers up the village, or cures the influenza, or brings oblivion of war news, or puts every one into conceit with themselves, so quickly, or leaves such a glow of sound satisfaction behind it. It would be odd if it did not, considering the amount of time, money, and trouble spent before the pack trots up to the green before the old grey church at eleven on a February morning. But without imitating Mr. Jack Spraggon, or reminding every one present of that "two housand five hundred — twenty-five 'undred — pounds a year " which Lord Scamperdale did or did not spend on his pack, let us see what our master and the servants and the hounds have done that morning. The meet is on the edge of his country, where the river bounds it, sixteen miles from his house, and he has ridden over all the way, rising before the sun has got through more than the outside layer of the mists. There is no special honour and glory awaiting him in return. The cover to be drawn is a hundred-acre wood, surrounded by deep and " holding " land for miles, now soaked with rain. A run of any distinction is most im- probable. On the other hand, there will be plenty of " hunting " of a certain kind, and the chance of seeing it, for the wood is overlooked by lofty hills. Therefore, though the meet is small, the neighbourhood as a body expect to see plenty of the hounds, and turn up expectant, the farmers on their cobs, the young ladies on ponies and in dog-carts, and all the village who can be spared for an hour on foot, while the small boys regard each other with rapturous grins, and practise " holloaing" to improve their lung-power when the fox breaks. When the hounds appear—they have come nearly as far from the kennels as the master has from home—they are covered with road mud from foot to head. The gritty splashes have changed all the white and tan to grey, and made the black badger-pied. While some roll on the grass and push themselves along sideways to get clean, and oteers attempt the impossible task of licking the mud off their legs and feet, the older hounds, who are less self conscious, poke their heads into the bands and against the chests of their ready-made friends, the village children, who rush in while the master and the field and lookers-on are exchanging courtesies, and embrace all the pack whom they can reach. Meantime the " assets " for the day's sport, the material complement on which this present assembly must rely for its day's hunting, lie in the cover and its contents. A hundred acres of wood, in seven stages of growth, from the high thickets which the woodmen were felling yesterday, to the teazle and stump- studded slope which they cut last year, with the deep river below and the swelling hills above, is the cover.

What the master would like would be that it should hold but one fox, that that fox should get away over the hills and on to the downs beyond as quickly as possible, and that he should never come back, but be killed three parishes away.

But no one believes in such luck ; and the local lookers-on do not in the least desire it. They want to see " a day's hunting" in the wood, and a fox to every half-dozen bounds. As a fact there are five foxes, not one, in the wood ; and, passing from the general to the particular, we may explain how they came here. The heavy rains of the end of January filled all the drains, in which many foxes lie, so full of water that they abandoned them in sheer disgust, and took to the warm lying of the wood. Among these was a most attractive vixen, whose society kept the rest from leaving when the weather improved ; consequently, the wood seemed full of foxes, none of which were disposed to leave it. When the pack trotted up to the main side, and the huntsman's ringing voice sent them crashing into the four-years' growth by the river, a brace were lying snug and dry in the old ash-stumps. One slipped into the river at once and quietly swam to the opposite bank, while the other crept all along the outside hedge and curled up in the corner waiting on events. The vixen slipped into a badger earth under an old oak and stayed there, and a couple more dog-foxes moved on into four acres of " low slop," brambles, shoots, and blackthorns, where they were winded by half the pack, while the other half were run- ning the first fox up the fence. The crash and music of the hounds re-echoed from the trees and the enfolding hills above, the shrieking of the jays as they flit protesting from tree to tree, the hearty ring of the huntsman's voice cheering his hounds,—surely all this should send each fox flying out over the fields beyond ! But a fox has no nerves. He keeps his head with the coolness of a Red Indian, and a " slimness " all his own. The first fox doubles back along his tracks, crosses the big ride twenty yards lower, just as that part of the pack which is hunting him flings on up the fence, and waits again till he hears them break out where he first stopped. From outside, where the field are waiting on a knoll which gives a downward view into the rolling acres of the wood, the rest of the pack are seen forcing another fox upwards towards the hills. The sight is as pretty as our woods can show. Down below the red coats of the master and huntsman move up the rides, and the beads and sterns of the broad line of hounds, now all clean and bright after brushing through the wood, rise and fall, appear and vanish, as they leap over or thrust through the "low slop" and brambles. In front, where a goyle runs up to the hollow of the bill, the ground has been cleared of wood, and the forest of tall teazle-tops is full of goldfinches, flying from seed-head to seed-head, too tame to mind the noise or care for anything but their breakfast. Yet even they gather and fly before the approaching tumult. Hares come hurrying out, and dash over the smooth hillside; magpies rise, poise themselves, slue round, and dive backwards into the wood; and then, circumspect, lopping easily and lightly along, a fox crosses through the teazles, and slips down to a drain in the hollow ; and see! another fox behind him, along the same path, and on the same errand, for each trots up to a covered drain, looks at it, and finding it stopped, pauses a second to think, and takes his resolve. One slips back into the wood, the other canters to the fence, rising the hill, looks out, whisks his brush and is off,—across the turf, over the fifty- acre field of growing wheat, and away to the back of the hills. Half the pack are running the first fox, who has slipped back to the river, but with the other half every one gets clear off, and does his best over the awful ground. The mud explodes like shells as the hoofs crush into it, but somehow every one is across and away, and on to the green road, and on to a line of sainfoin much sooner than could be expected. The fox can be seen crossing the back of the hill, looking big and red, and full of running ; but after twenty- five minutes over all sorts of ground, from medium bad to "downright cruel," for the soaking rains have made a very pudding even of the pasture, the fox is run into and killed close to the Thames. No one need be sorry for him, for he had lived by theft and violence for the last two years, and was duly eaten himself by his natural enemies. Then back to the wood again, where the rest of the pack had been whipped off their fox, and were waiting dolefully to begin again, by which time the other foxes, of which two elected to stay, had resolved that come what might, they would stick to the wood, of which they knew every inch by heart ; and by kreping tinder the river

bank, sneaking under layers of felled brushwood, dodging along drains, and other devices, postponed their fate for two hours, when one 'was "chopped" and one broke away and was ran into in a quarter of an hoar. This is not the kind of thing that keeps hunting alive, but it is the kind of day which occurs in moat ordinary counties in February, and at which no one greatly grumbles. But if a slow woodland day is un- attractive, the man who hunts in a modest way from London and wishes to be sure of a run has no lack of choice. Try, for instance, a day on the South Downs, five miles from the sea, on the vast uplands and among the furze-covered bottoms behind Beachy Head, when the snow-clouds are rolling in from the Channel and dusting the summits of the downs with white. There is at least the certainty of foxes, and of a gallop over the highest and soundest land in the South, and even "February fill-dike" cannot make the going heavy.