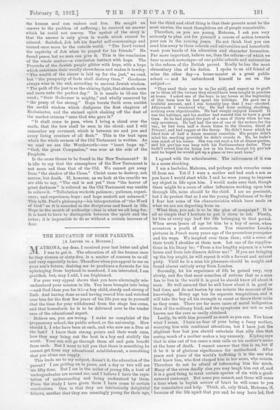 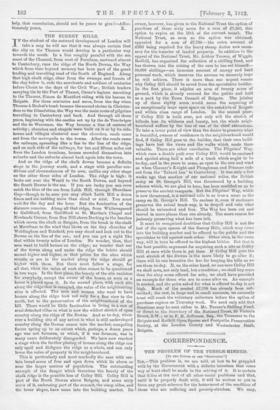 THE EDUCATION OF SOME PARENTS. [A LETTER TO A MOTHER.]

NATRONA, my dear, I received your last letter and glad I was to get it. The education of all the human race, be they sixteen or sixty-five, is a matter of concern to us all and very especially to me. Therefore when you appeal to me on your son's future, desiring me to predicate a formula for his upbringing from boyhood to manhood, I am interested, I am gratified, but, may I add, I am frightened.

For your very appeal shows that you have alarmingly mis- understood your mission in life. You have brought into being —and God bless you for it!—a boy child, sturdy and strong of limb. And having done so and having reared him and watched over him for the first few years of his life you say to yourself that the time for your withdrawal from the stage has come, and that henceforth ho is to be delivered over to the tender care of the educational expert.

Believe me, you are wrong. I make no complaint of the preparatory school, the public school, or the university. How should I, I who have been at each, and who now am a Don at the last P I know their strong points and their weak ones, bow they may bring out the best in a boy and stultify the worst. Your son will go through them all and gain benefit from each. But I want to tell you that there is something he cannot get from any educational establishment, a something that you alone can supply.

This leads me to my subject, doesn't it, the education of the parent P I am getting on in years, and a day or two will see me fifty-four. But I am in the midst of young life, a host of undergraduates are around me, and I believe I have the repu- tation of understanding and being understood by them. From the study I have given them I have come to certain conclusions. One is that they are intrinsically delightful " fellows, another that they are amazingly young for their age, but the third and chief thing is that their parents must be the most unwise, the most thoughtless set of people conceivable.

Therefore, as you are young, Matrons, I ask you very seriously to plan out for yourself a course of action towards your son in the coming years. Do not think that you can send him away to these schools and universities and henceforth wash your hands of his education and character formation. Far more important, believe me, than the reform—of which we hear so much nowadays—of our public schools and universities is the reform of the British parent. Really he has the most elementary idea of his duties. I spoke to an old friend of mine the other day—a house-master at a great public school — and he unburdened himself to me on the subject :- " They send their sons to us [he said], and expect us to graft on to them all the virtues they should have been taught to practise at home. I asked one of the boys in my house at the beginning of this term how he had spent his holidays. He gave me a truthful account, and I can honestly [say that I was—shocked. Afterwards I wondered why. He had done nothing shocking, nothing oven objectionable. He had simply enjoyed himself. It was the holidays, and his mother had wanted him to have a good time. So he had played the part of a man of thirty when he was only seventeen. He had had the use of one of the motors for the vac., he had been half a dozen times to the theatre, dined at Princes', and had supper at the Savoy. Ho didn't know which ho liked boat of half a dozen musical comedies. His people didn't mind his smoking provided he didn't overdo it. No, he hadn't seen much of his mater. She was out such a lot at dinner parties, and his guv'nor was busy with his Parliamentary duties. They hadn't rowed him for being low in his form, though his guv'nor said ho hoped ho would got up a place or two next term."

I agreed with the schoolmaster. The callousness of it was in a sense shocking.

I am a bachelor, Matrons, and perhaps such remarks come ill from me. Yet if I were a mother and had such a son as you have I would start while I and ho wore young to impress my object in life upon him. I would make sure that, though there might be a score of other influences working upon him through life, mine should be the chief. I am no pessimist, but I do protest that as I see the young Englishman of to-day I fear lest some of the characteristics which have made us what we are are departing from us.

What then, you ask, is to be the plan of campaign P It is all so simple that I hesitate to put it down in ink. Firstly, let him at every age lead the life belonging to that period.

When seven Fyears of age let him be a boy of seven, when seventeen a youth of seventeen. You remember Leech's pictures in Punch ninny years ago of the precocious youngster and his ways. We laughed over them then ; with a sense of their truth I shudder at them now. Let one of the supplica- tions in his litany be: "From a too lengthy sojourn in a town house and from late dinners deliver me I " If you are bringing up the boy aright, he will repeat it with a fervent and natural piety. Until he is a man his pleasures should be sought and found almost entirely away from London.

Secondly, let his experience of life be gained very, very slowly, and flee that most senseless of notions that as a man has to live in the world it is good he should know all about it soon. Be well assured that he will know about it in good or bad time, and do not hasten by one minute the moment of his knowledge. Every age has its separate temptations, and it will take the boy all his strength to resist or throw them aside as they come. There are far more cases of moral indigestion than of the ordinary kind, and the symptoms are not so well known nor the cure so easily obtained.

Lastly, be with him yourself as much as you can. You know what I mean. I have no fear of your being a fussy mother, worrying him with continual attentions, but I have just the slightest fear lest you should entertain that silly idea that seeing much of a mother makes a boy unmanly. Kipling says that in nine out of ten cases a man calls on his mother's name at the hour of death. I cannot answer that this is so, but if it be it is of glorious significance for motherhood. After years and years of the world's buffeting it is the one who first knew him, who first clasped him in her arms, who counts. Therefore do not be afraid of influencing him too much.

Many of the seven deadly sins you may laugh him out of, and it is a good thing to treat certain species of sin with a good- natured contempt. But some you cannot, and there will come a time when in boyish sorrow of heart he will come to you for consolation and help. Think, ah, only think, Matrona, if, because of the life apart that you and he may have led, that

help, that consolation, should not be yours to give !—Affec-