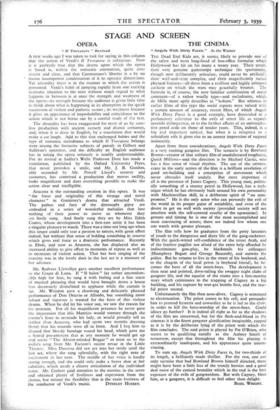 THE CINEMA - Angels With Dirty Faces." At the Warner

THE Dead End Kids are, it seems, likely to provide one of the safest and most long-lived of box-office formulae which Hollywood has hit on for many a weary year. Their youth, their very genuine guttersnipe technique (its spontaneity, though now deliberately articulate, could never be artificial), their waif-and-stray complex, and their magnificently varied physical features—all these form a resilient and highly coloured cushion on which the stars may gracefully bounce. The formula is, of course, the now familiar combination of social comment—of a rather woolly type—and melodrama, which de Mille more aptly describes as " hokum." But whereas in earlier films of this type the social aspects were valued with a certain amount of accuracy, recent films, of which Angels With Dirty Faces is a good example, have descended to a perfunctory reference to the evils of street life as regards juvenile delinquency, or to the further effects of an unimagina- tive penal cede on those of tender years. This, indeed, is a big and important subject, but when it is relegated to a subsidiary role it gives rise to an uneasy impression of sugared insincerity.

Apart from these considerations, Angels With Dirty Faces is a very exciting gangster film. The scenario is by Rowland Brown—creator of that solitary film of unadulterated toughness, Quick Millions—and the direction is by Michael Curtin, who has a fine sense of visual rhythm. The use of the camera- crane in the early scenes of the film is a brilliant revelation of good set-building and a conception of movement which never obtrudes itself unduly. But most important of all is the presence of James Cagney. This young man, politic- ally something of a stormy petrel in Hollywood, has a tech- nique which he has obviously built around his own personality with Machiavellian skill, in a deliberate spirit of " no com- promise." He is the only actor who can personify the evil of the world in its proper guise of amiability, and even of the desire to get on well with society (provided society will not interfere with the self-centred cruelty of the egomaniac). In gesture and timing he is one of the most accomplished and most convincing of actors; there are indeed few whom one can watch with greater pleasure.

The film tells how he graduates from the petty larcenies of youth to the dangerous and dizzy life of the gang-racketeer. With the quick-witted self-confidence of the street Arab, and of the fearless pugilist not afraid of the extra help afforded by indiscriminate gun-play, he blackmails his colleagues (Humphrey Bogart and George Bancroft), and outwits the police. But he returns to live in the street of his boyhood, and, to the chagrin of the local priest (a boyhood friend), he be- comes the hero of all the street-boys. The development is then neat and pointed, dove-tailing the swagger night clubs of gangster life, and the squalor of the slums into a fast-moving story which culminates in the trapping of Cagney in a big building, and his capture by tear-gas bombs first, and the tear- ful priest second.

Unfortunately the film then nose-dives. Cagney is sentenced to electrocution. The priest comes to his cell, and persuades him to pretend hysteria and cowardice as he is led to the chair. in order to kill the hero-worship of the street-boys. Could idiocy go further? It is indeed all right as far as the shadows of the film are concerned, but for the flesh-and-blood in the cinemas it is the finest gangster glorification imaginable, capped as it is by the deliberate lying of the priest with which the film concludes. The said priest is played by Pat O'Brien, who seems to be qualifying rapidly as the Aubrey Smith of tomorrow, except that throughout the film his playing is extraordinarily inadequate, and his appearance quite uncon- vincing.

To sum up, Angels With Dirty Faces is, for two-thirds of its length, a brilliantly made thriller. For the rest, one can only surmise that had Rowland Brown himself directed, there might have been a little less of the treacly heroics and a good deal more of the cynical brutality which in the end is the best exposure of the evils of gangsterdom. But with Cagney, bless him, as a gangster, it is difficult to feel other than delight.