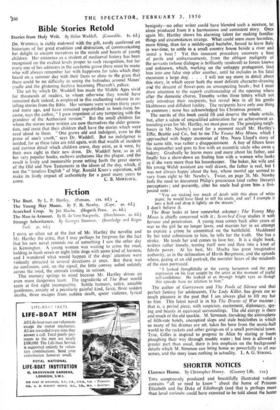 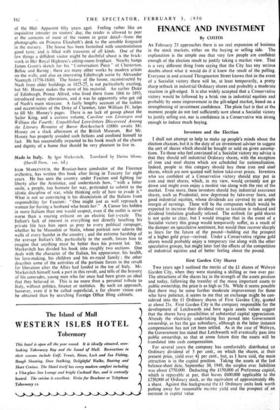 Clarence House. By Christopher Hussey. (Country Life. 2 is.) THIS sumptuously produced and beautifully illustrated volume contains "all ye need to know" about the home of Princess Elizabeth and the Duke of Edinburgh (and that is perhaps more than loyal curiosity could have expected to be told about the borne

of the Heir Apparent fifty years ago). Feeling rather like an inquisitive intruder on visitors' day, the reader is allowed to peer at the contents of most of the rooms in great detail—from the photographs on Princess Elizabeth's desk to the sensible fireguard in the nursery. The house has been furnished with unostentatious good taste, and is filled with treasures of all kinds. One of the few things a diffident visitor might be doubtful about is the brick- work in Her Royal Highness's sitting-room fireplace. Nearby hangs James Gunn's sketch for his "Conversation Piece" of Chesterton, Belloc and Baring: there are many other works by modern artists on the walls, and also an interesting Edinburgh scene by Alexander Nasmyth (1758-1840). The history of the house, reconstructed by Nash from older buildings in 1825-27, is not particularly exciting, but Mr. Hussey makes the most of his material. An earlier Duke of Edinburgh, Prince Alfred, who lived there from 1866 to 1893, introduced many alterations, and at was he apparently who got rid of Nash's main staircase. A fairly lengthy account of the foibles and eccentricities of the Duke of Clarence, later William IV, helps to fill Mr. Hussey's pages. There is no lack of gossip about the

ailor King, and a curious volume, Caroline von Linsingen and William the Fourth: Unpublished Love-letters Discovered Among the Literary Remains of Baron Reichenbach (1880) awaits Mr. Hussey on a slack afternoon at the British Museum. But Mr. Hussey has properly avoided such fictions and confined himself to fact. He has successfully imparted to his book much of the charm and dignity of a home that should be very pleasant to live in.