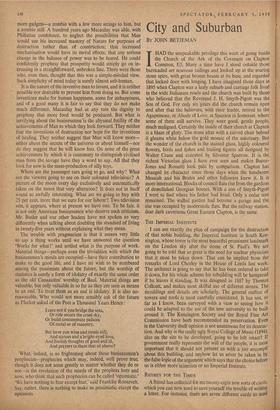 BY JOHN BETJEMAN IHAD the unspeakable privilege this week of going inside the Church of the Ark of the Covenant on Clapton Common, E5. Many a time have I stood outside those barricaded art nouveau railings and looked up at the soaring stone spire, with great bronze beasts at its base, and regarded that locked door with longing. I have imagined those days in 1895 when Clapton was a leafy suburb and carriage folk lived in the wide Italianate roads and the church was built by those who believed that the Reverend J. H. Smyth-Pigott was the Son of God. For only six years did the church remain open and after that the believers, with their leader, retired to the Agapemone, or Abode of Love. at Spaxton in Somerset. where some of them still survive. They were good, gentle people, much maligned. Certainly the inside of their church at Clapton is a blaze of glory. The stone altar with a carved chair behind it gleams white below the gold mosaic of the sanctuary. But the wonder of the church is the stained glass, highly coloured flowers, birds and fishes and trailing figures all designed by Walter Crane and executed by SilveSter Sparrow. It is the richest Victorian glass I have ever seen and makes Burne- Jones and Rossetti look pale by comparison. Clapton has changed its character since those days when the handsome Messiah and his Brides and other followers knew it. It is more international. Blocks of council fiats rise from the gardens of demolished Georgian houses. With a son of Smyth-Pigott I went to find where his father had lived. Only a cedar tree remained. The walled garden had become a garage and the site was occupied by modernistic flats. But the railway station, dear dark cavernous Great Eastern Clapton, is the same.