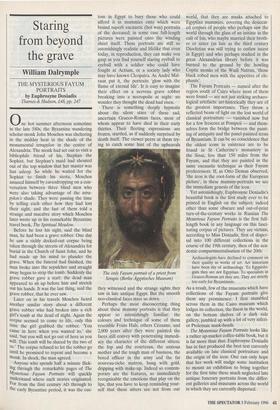 Staring from beyond the grave

THE MYSTERIOUS FAYUM PORTRAITS by Euphrosyne Doxiadis Thames & Hudson, £48, pp. 247 One hot summer afternoon sometime in the late 580s, the Byzantine wandering scholar-monk John Moschos was sheltering in the midday heat in the shade of the monumental tetrapylon in the centre of Alexandria. The monk had set out to visit a bibliophile friend of his, Stephan the Sophist, but Stephan's maid had shouted out of the top window that her master was fast asleep. So while he waited for the Sophist to finish his siesta, Moschos amused himself by eavesdropping on a con- versation between three blind men who were also taking advantage of the tetra- pylon's shade. They were passing the time by telling each other how they had lost their sight, and the last of them told a strange and macabre story which Moschos later wrote up in his remarkable Byzantine travel book, The Spiritual Meadow.

Before he lost his sight, said the blind man, he had been a grave robber. One day he saw a richly decked-out corpse being taken through the streets of Alexandria for burial in the Church of Saint John, and he had made up his mind to plunder the grave. When the funeral had finished, the man broke into the sepulchre and straight away began to strip the tomb. Suddenly the grave robber gave a start: the dead man appeared to sit up before him and stretch out his hands. It was the last thing, said the grave robber, that he ever saw.

Later on in his travels Moschos heard another similar story about• a different grave robber who had broken into a rich girl's tomb at the dead of night. Again the corpse seemed to come to life, only this time the girl grabbed the robber. 'You came in here when you wanted to,' she said, 'but you will not go out of here as you will. This tomb will be shared by the two of us.' The corpse refused to let the robber go until he promised to repent and become a monk. In shock, the man agreed.

Anyone who spends half a minute flick- lag through the remarkable pages of The Mysterious Fayum Portraits will quickly understand where such stories originated. For from the first century AD through to the early Byzantine period, it was the cus- tom in Egypt to bury those who could afford it in mummies onto which were bound superb encaustic (hot wax) portraits of the deceased; in some case full-length pictures were painted onto the winding sheet itself. These portraits are still so astonishingly realistic and lifelike that even today, in reproduction, they can make you gasp as you find yourself staring eyeball to eyeball with a soldier who could have fought at Actium, or a society lady who may have known Cleopatra. As Andre Mal- raux put it, the portraits 'glow with the flame of eternal life'. It is easy to imagine their effect on a nervous grave robber breaking into a necropolis at night: no wonder they thought the dead had risen.

There is something deeply hypnotic about the silent stare of these sad, uncertain Graeco-Roman faces, most of whom appear to have died in their early thirties. Their fleeting expressions are frozen, startled, as if suddenly surprised by death itself. The viewer peers at them try- ing to catch some hint of the upheavals The only Fayum portrait of a priest from Serapis (Berlin Agyptisches Museum) they witnessed and the strange sights they saw in late antique Egypt. But the smooth neo-classical faces stare us down.

Perhaps the most disconcerting thing about these mummy portraits is that they appear so astonishingly familiar: the colours and technique of some of them resemble Frans Hals, others Cezanne, and 2,000 years after they were painted the faces still convey with penetrating immedi- acy the character of the different sitters: the fop and the courtesan, the anxious mother and the tough man of business, the bored officer in the army and the fat nouveau-riche matron, hung with gold, dripping with make-up. Indeed so contem- porary are the features, so immediately recognisable the emotions that play on the lips, that you have to keep reminding your- self that these sitters are not from our world, that they are masks attached to Egyptian mummies, covering the desiccat- ed corpses of people who perhaps saw the world through the glass of an initiate in the cult of Isis, who maybe married their broth- er or sister (as late as the third century Diocletian was still trying to outlaw incest in Egypt) and who perhaps studied in the great Alexandrian library before it was burned to the ground by the howling Coptic monks of the Wadi Natrun, 'those black robed men with the appetites of ele- phants'.

The Fayum Portraits — named after the region south of Cairo where most of them were found — are not just striking archaeo- logical artefacts: art-historically they are of the greatest importance. They throw a reflected beam of light on the lost world of classical portraiture — vanished now but for a few frescoes at Pompeii — and them- selves form the bridge between the paint- ing of antiquity and the panel-painted icons of Byzantium. It can be no coincidence that the oldest icons in existence are to be found in St Catherine's monastery in the Sinai, less than 150 miles from the Fayum, and that they are painted in the same encaustic technique as their Fayum predecessors. If, as Otto Demus observed, `the icon is the root-form of the European picture', in these mummy-portraits we see the immediate genesis of the icon.

Yet astonishingly, Euphrosyne Doxiadis's beautiful book is the first study ever to be printed in English on the subject; indeed other than some obscure and out-of-print turn-of-the-century works in Russian The Mysterious Fayum Portraits is the first full- length book in any language on this fasci- nating corpus of pictures. They are victims, according to Miss Doxiadis, first of disper- sal into 100 different collections in the course of the 19th century, then of the aca- demic compartmentalisation of the 20th:

Archaeologists have declined to comment on their quality as works of art. Art historians have been shy of archaeology. To Egyptolo- gists they are not Egyptian. To specialists in Graeco-Roman art they are. They are strictly too early for Byzantinists.

As a result, few of the museums which have collections of the Fayum portraits give them any prominence: I first stumbled across them in the Cairo museum which lodges its collection, the finest in the world, on the bottom shelves of a dark side gallery, jumbled up with a lot of very inferi- or Ptolemaic mask-heads.

The Mysterious Fayum Portraits looks like a rather up-market coffee-table book, but it is far more than that. Euphrosyne Doxiadis has in fact produced the best text currently available on late classical portraiture and the origin of the icon. One can only hope that her work will nudge some institution to mount an exhibition to bring together for the first time these much neglected late antique funerary portraits from the differ- ent galleries and museums across the world in which they are currently dispersed.