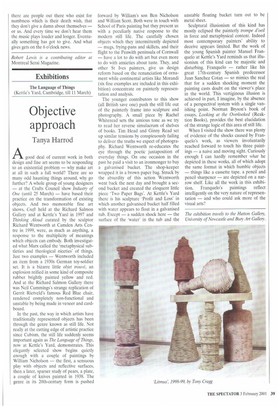 Agood deal of current work in both design and fine art seems to be responding to an existential problem — why make art at all in such a full world? There are so many odd haunting things around, why go further? A whole group of young designers — at the Crafts Council show Industry of One (until 25 March) — have based their practice on the transformation of existing objects. And two memorable fine art shows, Craft held at the Richard Salmon Gallery and at Kettle's Yard in 1997 and Thinking Aloud curated by the sculptor Richard Wentworth at Camden Arts Centre in 1999, were, as much as anything, a response to the multiplicity of meanings which objects can embody. Both investigated what Marx called the 'metaphysical subtleties and theological niceties' of things. Just two examples — Wentworth included an item from a 1930s German toy-soldier set. It is a bizarre little objet trouve, an explosion reified in some kind of composite rubber brightly painted yellow and red. And at the Richard Salmon Gallery there was Neil Cummings's strange replication of Gerrit Rietveld's famous Red Blue chair, rendered completely non-functional and unstable by being made in veneer and cardboard.

In the past, the way in which artists have traditionally represented objects has been through the genre known as still life. Not really at the cutting edge of artistic practice since Cubism, the still life suddenly seems important again as The Language of Things, now at Kettle's Yard, demonstrates. This elegantly selected show begins quietly enough with a couple of paintings by William Nicholson — the first, a sensuous play with objects and reflective surfaces, then a later, sparser study of pears, a plate, a couple of knives painted in 1938. The genre in its 20th-century form is pushed

forward by William's son Ben Nicholson and William Scott. Both were in touch with School of Paris painting but they present us with a peculiarly native response to the modern still life. The carefully chosen objects which they intermittently depicted — mugs, frying-pans and skillets, and their flight to the Penwith peninsula of Cornwall — have a lot to do with art but even more to do with anxieties about taste. They, and other St Ives painters, give us design reform based on the renunciation of ornament while continental artists like Morandi (six fine examples are included in this exhibition) concentrate on painterly representation and analysis.

The younger contributors to this show (all British save one) push the still life out of the painterly frame into sculpture and photography. A small piece by Rachel Whiteread sets the anxious tone as we try to read her reverse simulacrum of shelves of books. Tim Head and Ginny Read set up similar tensions by conspicuously failing to deliver the truths we expect of photography. Richard Wentworth re-educates the eye through the poetic juxtaposition of everyday things. On one occasion in the past he paid a visit to an ironmonger to buy a galvanised bucket. The shop-keeper wrapped it in a brown paper bag. Struck by the absurdity of this action Wentworth went back the next day and brought a second bucket and created the eloquent little piece 'Two Paper Bags'. At Kettle's Yard there is his sculpture 'Profit and Loss' in which another galvanised bucket half filled with water appears to float in a galvanised tub. Except — a sudden shock here — the surface of the 'water' in the tub and the unstable floating bucket turn out to be metal sheet.

Sculptural illusionism of this kind has mostly eclipsed the painterly trompe d'oeil in force and metaphysical content. Indeed most contemporary painters' ability to deceive appears limited. But the work of the young Spanish painter Manuel Franquelo at Kettle's Yard reminds us that illusionism of this kind can be majestic and disturbing. Franquelo — rather like his great 17th-century Spanish predecessor Juan Sanchez Cotan — so mimics the real that for a sudden shocking moment the painting casts doubt on the viewer's place in the world. This vertiginous illusion is achieved in part, I imagine, by the absence of a perspectival system with a single vanishing point. Norman Bryson's book of essays, Looking at the Overlooked (Reaktion Books), provides the best elucidation of the strange logic of this area of still life.

When I visited the show there was plenty of evidence of the shocks caused by Franquelo's work, as viewers involuntarily reached forward to touch his three paintings — a naive and moving sight. Curiously enough I can hardly remember what he depicted in these works, all of which adopt the same format in which humble objects — things like a cassette tape, a pencil and pencil sharpener — are depicted on a narrow shelf. Like all the work in this exhibition. Franquelo's paintings reflect intelligently on the very nature of representation — and who could ask more of the visual arts?

The exhibition travels to the Hatton Gallery, University of Newcastle and Bury Art Gallery.