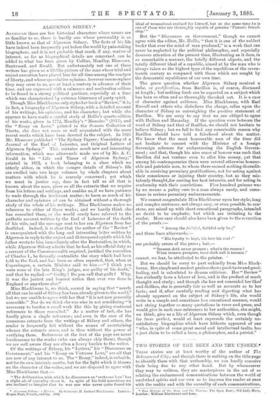 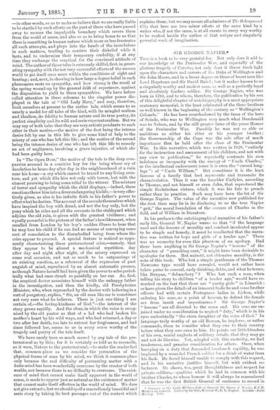 TWO STORIES OF THE SEEN AND THE UNSEEN.* THESE stories

are at least worthy of the author of The Beleaguered City; and though there is nothing on the title-page to identify them with that authorship, we can hardly conceive

their being due to any other hand. But by whomsoever they may be written, they are masterpieces in the art of so relating the embarrassed communications between the world of unclothed spirits and our own as to impress the reader at once with the reality and with the unreality of such communications,

—in other words, so as to make ns believe that we are really liable to be startled by such efforts on the part of those who have passed away to recross the impalpable boundary which severs them from the world of sense, and also so as to bring home to us that there is something in human nature which more or less frustrates all such attempts, and plays into the hands of the incredulous in such matters, tending to confirm their disbelief while it lasts, and to undermine their temporary credulity, if at any time they exchange the sceptical for the convinced attitude of mind. The author of these tales is extremely skilful, first, in generating sympathy with the not very successful efforts of the unseen world to get itself once more within the conditions of sight and hearing ; and, next, in showing in how large a degree belief in such phenomena rests on sympathy, and how strong is the recoil of the spring wound-up by the general drift of experience, against the disposition to yield to these sympathies. We have before called attention in these columns to the singular power displayed in the tale of " Old Lady Mary," and may, therefore, limit ourselves at present to the earlier tale, which seems to us nearly a model for all tales of the kind, with its mingled realism and idealism, its fidelity to human nature and its true poetry, its perfect simplicity and its wild and eerie supernaturalism. But we may say of both tales that they are very artistic pendants to each other in their motive,—the motive of the first being the intense desire felt by one in this life to give some kind of help to the misery of one who has left this life ; and the motive of the second being the intense desire of one who has left this life to remedy an act of negligence, involving a grave injustice, of which she had been guilty here.

In "The Open Door," the motive of the tale is the deep compassion aroused in a sensitive boy for the being whose cry of desolation he hears day after day in the neighbourhood of a ruin near his home—a cry which cannot be traced to any living creature, and yet which fills him not only with terror, but with the utmost yearning to bring some relief to the utterer. The mixture of terror and sympathy which the child displays,—indeed, these emotions throw him into a fever endangering his life,—is very effectively given, as also is his, infinite faith in his father's power to effect what he desires. The account of the sounds themselves which have inspired the boy with dread, and not the boy only, but the pony which he rides and all the servants in the stableyard which adjoins the old ruin, is given with the greatest vividness ; and equally powerful is the picture of the father's bewilderment, when recalled from London by his boy's sudden illness to hear that he may lose his child if he can find no means of conveying some sort of consolation to the disembodied being from whom the cries appear to proceed. A special feature is noticed as apparently characterising these preternatural cries,—namely, that they appear to be almost a mechanical repetition, day after day and night after night, of the misery expressed on some real occasion, and not so much to be outpourings of an existing emotion, as a rehearsal of the expression of past anguish of mind, reproduced by an almost automatic process, as though Nature herself had been given the power to echo periodically what had once struck so painfully on her ear. As, first, the sceptical doctor associates himself with the unhappy father in the investigation, and then the kindly, old Presbyterian Minister, who, when reproached by the doctor with believing in .a sort of purgatory, replies, " Sir, an old man like me is sometimes not very sure what he believes. There is just one thing I am certain of,—the loving-kindness of God,"—the interest of the story grows rapidly. And the close, in which the voice is recognised by the old pastor as that of a lad who had broken his mother's heart by his wild ways, and who had returned, a day or two after her death, too late to entreat her forgiveness, and had since followed her, seems to us in every sense worthy of the tragedy and poetry of the tale itself.

We have rarely been so much moved by any tale of the preternatural as by this ; for it is certainly so told as to reconcile, as it were, Nature to the preternatural,—to make the reader feel that, common-place as we consider the permeation of the physical frame of man by his mind, we think it common-place only because the real difficulty of permeating matter with a finite mind has been wonderfully overcome by the creator of both worlds, not because there is no difficulty to overcome. The existence of mind that cannot make itself apparent in the world of sense, is made to appear just as natural as the existence of matter that cannot make itself effective in the world of mind. We dare not give extracts, lest we should spoil a marvellously beautiful and eerie story by taking its best passages out of the context which

explains them; but we may assure all admirers of The Beleaguered City that here are two minor efforts of the same kind by a writer who, if not the same, is at all events in every way worthy to be ranked beside the author of that unique and singularly powerful work of imagination.